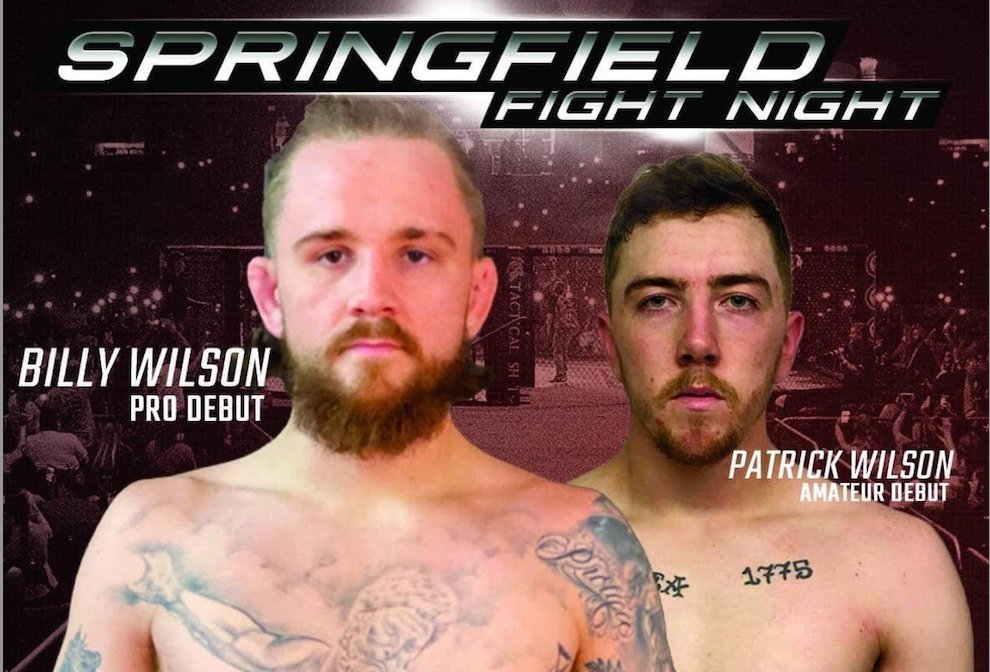 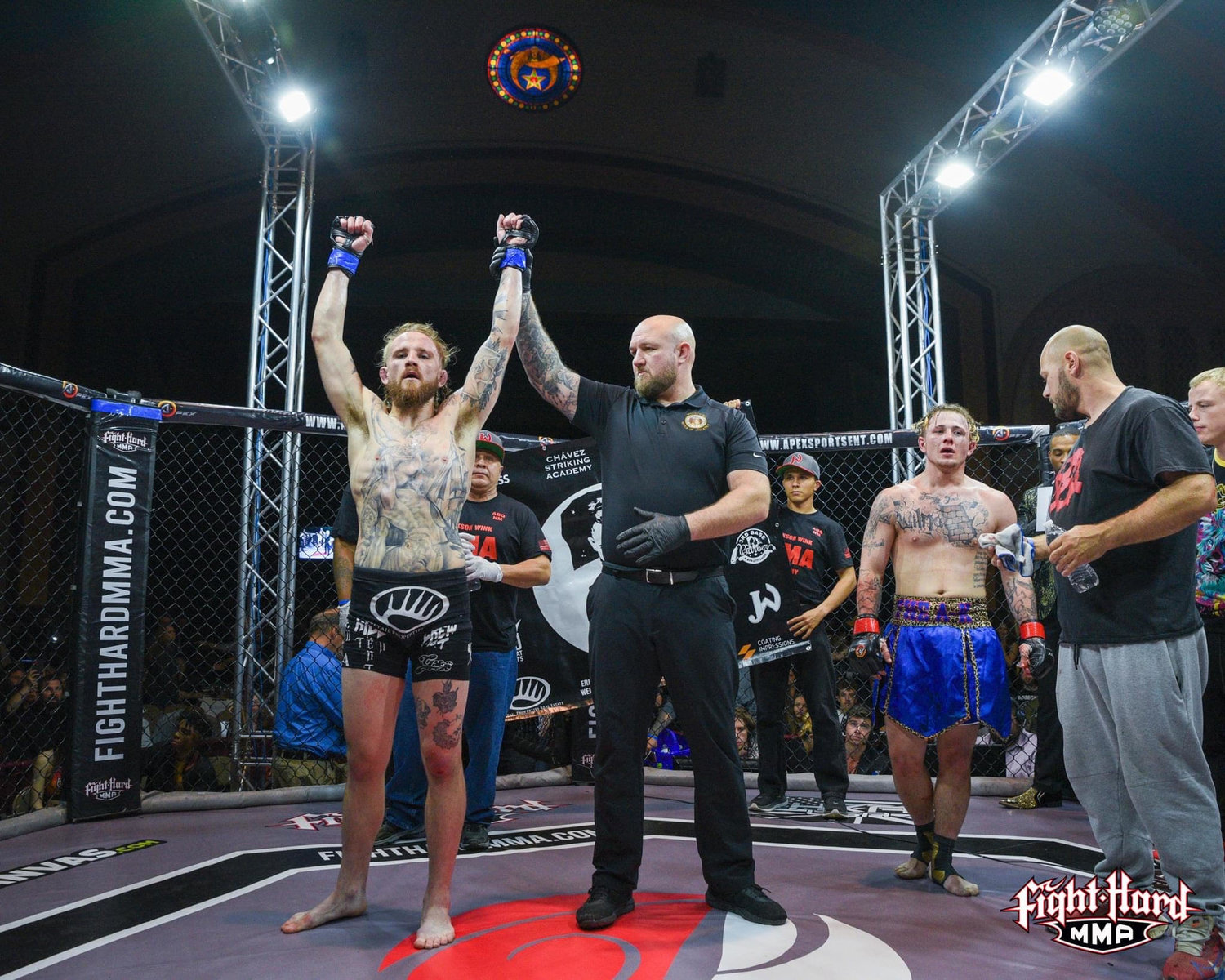 On March 26, Billy "The Kid" entered the cage ranked No.1 in both Missouri and Kansas at the amateur level. His victory over opponent Tray Martin starts his pro career with a record of 1-0-0.
Previous Next
Posted Wednesday, March 30, 2022 12:00 am

No one understands the definition of blood, sweat and tears better than an MMA fighter who has spent the last six months training for a one-night cage fight. This past Saturday, two Marshfield Natives: Patrick Wilson and Billy Wilson, made their debuts in the mixed martial arts world as amateur cage fighter and pro cage fighter respectively. It’s not every day that Marshfield can brag about professional athletes and the boys’ mom, and Marshfieldian Karen Wilson, wanted the whole town to know just how important Saturday’s fight was.

“I’m just really proud of my boys and if it wasn’t for the Marshfield Club wrestling program, they never would have ended up here,” said Karen.

Billy “The Kid” Wilson has been performing in the MMA Fight world for several years. He started off in the amateur scene and built up quite a reputation.“I went 7 in 1 in amateur MMA and won 3 titles while I was doing that. I was number one on the amateur side in a lot of places, and like number 4 in the US/Midwest. So now I’m making the jump and making my pro debut Saturday,” said Billy “The Kid”. And The difference between amateur and pro? “Amateur you don’t get paid, it’s like you’re just getting your experience in. Pro you start getting paid. Paid for your fights, bonuses, making it a living,” explained Wilson. As of writing this article Billy “The Kid” Wilson is ranked number one in Missouri and Kansas, fourth in the US Midwest and number 1 in the US Southwest.

Billy has spent the last six months training full time, putting a pause on his career as a Barber, he moved to New Mexico to intensify his training at a facility called Jackson Wink MMA Academy.

“We do a lot of wrestling, jiu-jitsu and running. The elevation in New Mexico is a lot different, it’s a whole different environment than what I was used to (at home). It’s like achieving a new level of a video game almost,” reflects Billy on his time training at Jackson Wink. When asked how he got started in the world of cage fighting Billy gave credit to his time in the Marshfield wrestling club and his time training under his high school Coach Matt Holt.

“I wrestled my senior year in High School, and I was getting pretty decent at wrestling, I wasn’t making waves or anything, but I was just better than I was. I was wrestling under Coach Matt Holt and Adam Wright, and I just really fell in love with wrestling. When I graduated, I kept finding ways to continue wrestling, I really missed it. I coached for a while, but it wasn’t giving me the physical aspect I needed. I started doing jiu-jitsu in Springfield and some of the guys there talked me into training with the MMA guys. I was horrible at first, but after about six months of training I took my first fight, it lasted like 45 seconds and the rush was just amazing.”

While Billy “The Kid” Wilson makes his debut as a professional MMA fighter, his little brother will also be stepping into the cage for his very first time, making his debut as an amateur fighter. “I’m very excited for Saturday, not as nervous as I thought I was going to be, I feel like a lot of experience that I’ve had in my life has set me up for this moment,” said Patrick Wilson when asked how he was feeling about his upcoming fight.

At only 23 years old Patrick Wilson has already served his county in the marine corps and is now ready to follow his dream into the world of MMA fighting. “I started off wrestling (in high school). It opened my eyes to combat sports and I would watch UFC fights as much as I could. Once I got into the marine corps and experienced the whole warrior’s ethos, it really opened my mind that I could do this (fighting),” said Wilson.

Wilson has spent the last six months training for the Saturday night fight, spending no less than 3 hours a day training. “I work full time, so I get off at 5:30 and head straight to Springfield Fight Club to train. I usually do a mix of mixed martial arts, jiu-jitsu, and wrestling. This week I’ve been running in the mornings to keep my weight down.”

“I have always wanted to do this,” recounts Patrick on his love of MMA Fighting. “It’s kind of funny, I left for the marine corps and I got back for a break and my brother (Billy) was like” hey wanna come watch me fight”, I was like is this a joke? But I’ve been watching him and supporting him and I’m learning from him. It’s kind of made it easy, I don’t have to make all the same mistakes he made early on in his career.”

Both Billy and Patrick entered the ring on Saturday night ready to make their debuts in the fight world as pro and amateur fighters. Patrick ultimately lost his match against Ray Hayes, but he isn’t done yet. “I’m going to get back in the gym and keep training,” said Patrick when asked what comes next.

As for Billy, he was successful in his match against Tray Martin out of Colombia, MO. “What comes next for me is figuring out some other aspects of life in the business world, seeking some avenues to further my growth, building my brand, and somewhere down the road, taking another fight when the timing is right for me,” said Billy. “Right now, I just got home from a six-month training camp. I want to catch up with my close friends and family who have supported me and for now I am enjoying life, training, learning and becoming the best I can be.” Billy would like to thank the following people and sponsors for helping him make it this far in his fighting career: Brooks Hardwood Flooring, Whitetail Properties, Groovy Gardens-they’ve been supporting me for this last six months, Third Base Barber shop in New Mexico, Jackson Wink, Springfield Fight Club, and then a huge shout out to my friends and family that have been supporting me this whole time. “I honestly couldn’t have done any of this without my family and my girlfriend.”