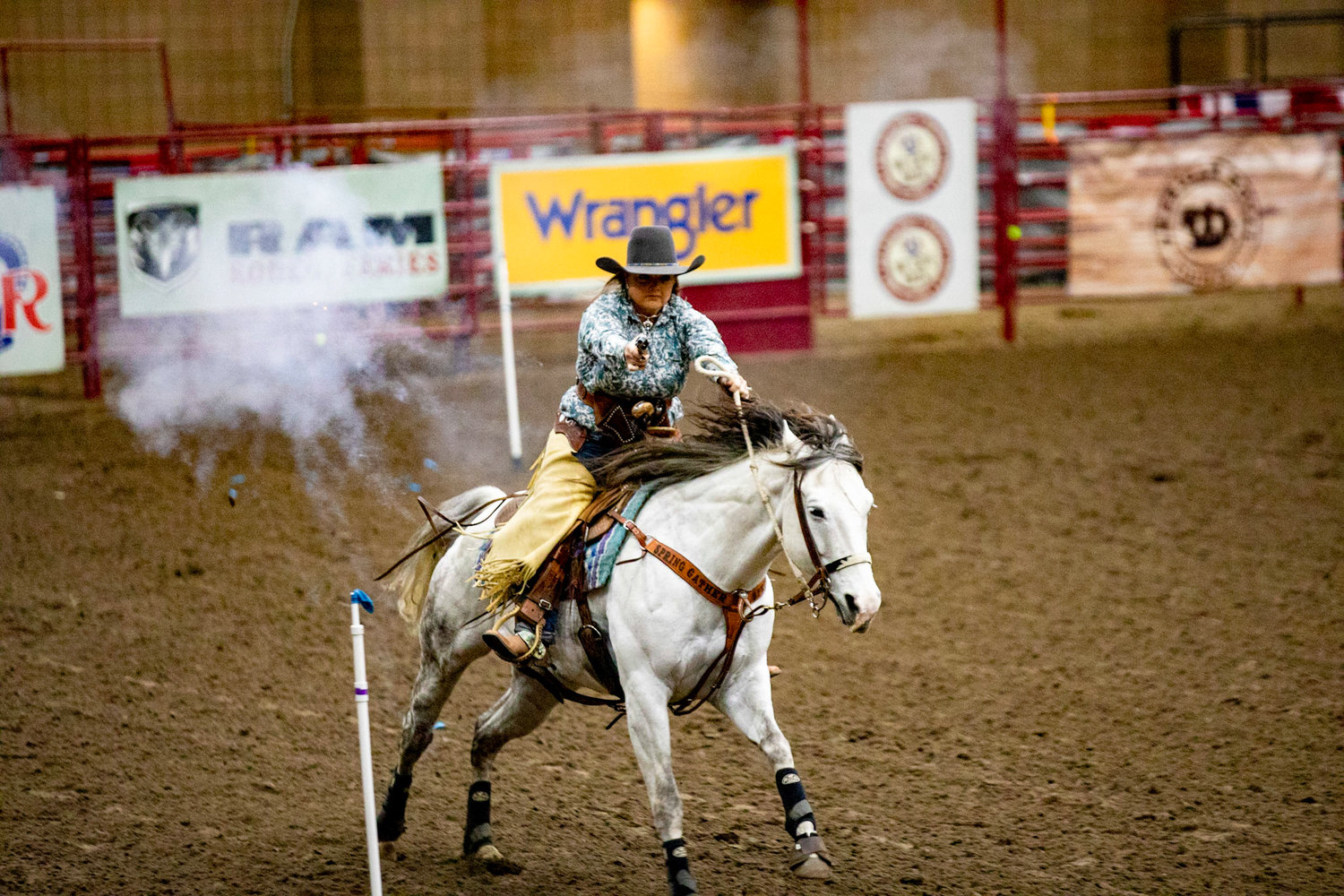 “There is a lot to remember,” Rezak shared about packing herself and her horses for competition. “My first shoot in Stoutland last year, I forgot my guns,” laughed Rezak. “You have to remember your guns and your holsters.”
Contributed by Jessica Rezak 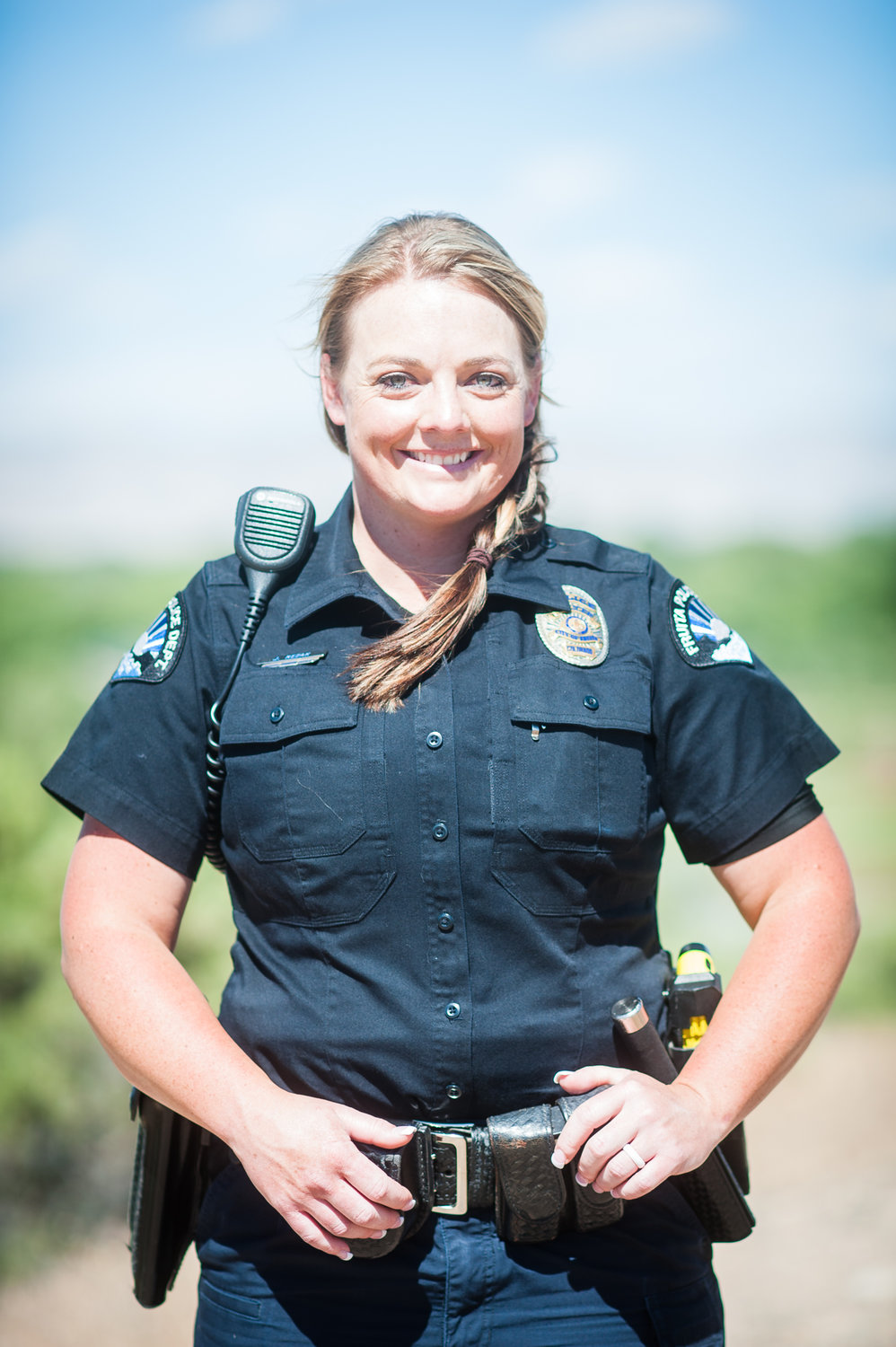 Officially retired, Rezak can give it “arrest”. She severed as a police officer for 10 years in Colorado.
Contributed by Jessica Rezak 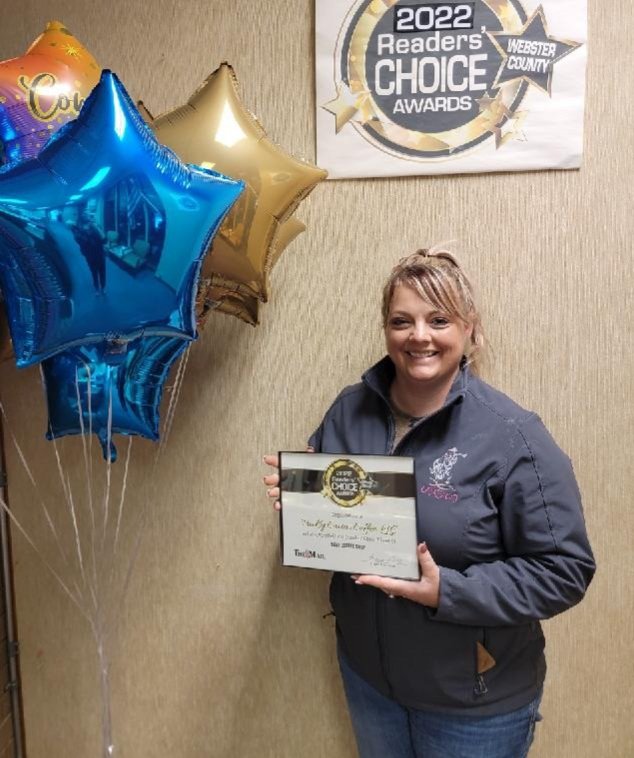 Prickly Cactus Coffee shop, owned by Jessica Rezak, has won the Readers Choice Awards hosted by the Marshfield Mail, for best cup of coffee in 2020 and Best coffee shop in 2021 and 2022.
Contributed by Jessica Rezak
Previous Next
Posted Wednesday, August 31, 2022 12:00 am
By Amber Brand amberb@marshfieldmail.com

Almost three years ago, Marshfield was a buzz of excitement as word spread of a coffee shop coming to town. Jessica Rezak, the owner of the Prickly Cactus, hasn’t always been a coffee shop owner. Rezak, a Colorado native turned Marshfieldian, spent ten years as a police officer in Fruita, Colorado before packing up and moving to Missouri.

During her downtime as a police officer, Rezak also spent time with horses. As she planned her leave from law enforcement and her move to Missouri, Rezak had a plan.

“My goal when we moved here was to train horses full-time. Long story short, I had to go back to Colorado for a court date from when I was in law enforcement. I ended up breaking my back there. I got bucked off a horse at a friend's house, broke my back,” reflected Rezak. “I laid there and was like, ‘alright God, this clearly isn’t what I’m supposed to do’.”

Upon returning home and healing from her injury, Rezak decided she wanted a career where she called the shots. She opened a boutique, however, she looked further down the road and eventually settled into opening a coffee shop.

“I had a really good friend back home who owned a coffee shop,” explained Rezak. “I reached out to her because this town didn’t have a coffee shop and I’m an avid coffee drinker…In November of 2019, I told my husband I wanted to open a coffee shop and he said ‘let's do it’. We opened in February of 2020.”

While Prickly Cactus, named after Rezaks’ taste in decorating, has quickly become a go-to for the people in Marshfield, there is more to the woman behind the bar than meets the eye. Although enduring major injuries from her earlier accident, Rezak was ready to ‘get back in the saddle’.

Not only does she wear the badges of a retired police officer, barista, and mother, but Rezak is also a Cowboy Mounted Shooter.

“There were a couple of ladies that I worked with in Fruita Police Department that did it (cowboy mounted shooting) and I’ve always had a love of horses. I’ve ridden my whole life, plus a love of guns, and it just kind of combined the two,” explained Rezak.

So what is Cowboy Mounted Shooting one may ask? In short, Rezak explains it as: “There (are) hundreds of courses and (They) are set up with 10 balloons; five of one color and five of another. For the revolver courses, we have two single-action revolvers. They are six-shooters, loaded with five rounds each. You have one revolver for one color balloon and one for the other.”

“You have your course of fire (explained before you go into the arena). You shoot all one color balloons with one (revolver), then you do a gun exchange, and shoot all the other balloons of the other color,” finished Rezak.

The kicker-you do all of this while riding your horse, “as fast as you can”.

“What people don’t understand, is a single action revolver-you have to cock the hammer every time before you shoot. So you have to practice being a fast shot because your horse can outrun how fast you can shoot,” shared Rezak.

Rezak has been participating in the sport for several years, “I started doing (it) about ten to twelve years ago. I did it for two years and my first horse passed away,” reflected Rezak. “The horse you see in most of my pictures, my grey horse, she was just two when I bought her. It took some years to get her trained and going…I’ve been competing with her for the past couple of years and I’ve started (training) two four-year-olds (horses) right now.”

In the world of Cowboy Mounted Shooting there are events called “futurities”. “We are entered in the United States Mounted Shooting Futurity, which takes place in Mt. Vernon on October 1 and 2,” shared Rezak. “These futurities are only for four-year-old horses. They can only enter it once, up until their four-year-old year, and they can never have competed in cowboy-mounted shooting. It’ll be fun to see how these four-year-olds do. Right now, I have two entered.”

Rezak is a member of the Cowboy Mounted Shooters Association (CMSA) and the United States Mounted Shooters Association. “When I got on there, they have local clubs within your area. Missouri Big Irons is who I shot with first. You just slowly start meeting people. It’s one of the most family-oriented sports,” Rezak explained of how she found places to compete here in Missouri.

“Last year in Rolla I won my first mounted shooting buckle, I’ve won money…my goal is (always) to shoot clean,” Rezak shared. “On CMSA you start as a level one, you have to win so many to go up to a level two, and it goes all the way to a level six. That’s ladies' levels, men's levels, and seniors.”

If you’d like to see Rezak perform you can catch her at the Humansville shoot on September 9 and 10 or in Mt. Vernon on October 1 and 2. With Rezak holding the title of Ladies Level 2 in Cowboy Mounted Shooting, it’s fair to say that Marshfield’s coffee shop owner is also our very own Annie Oakley.