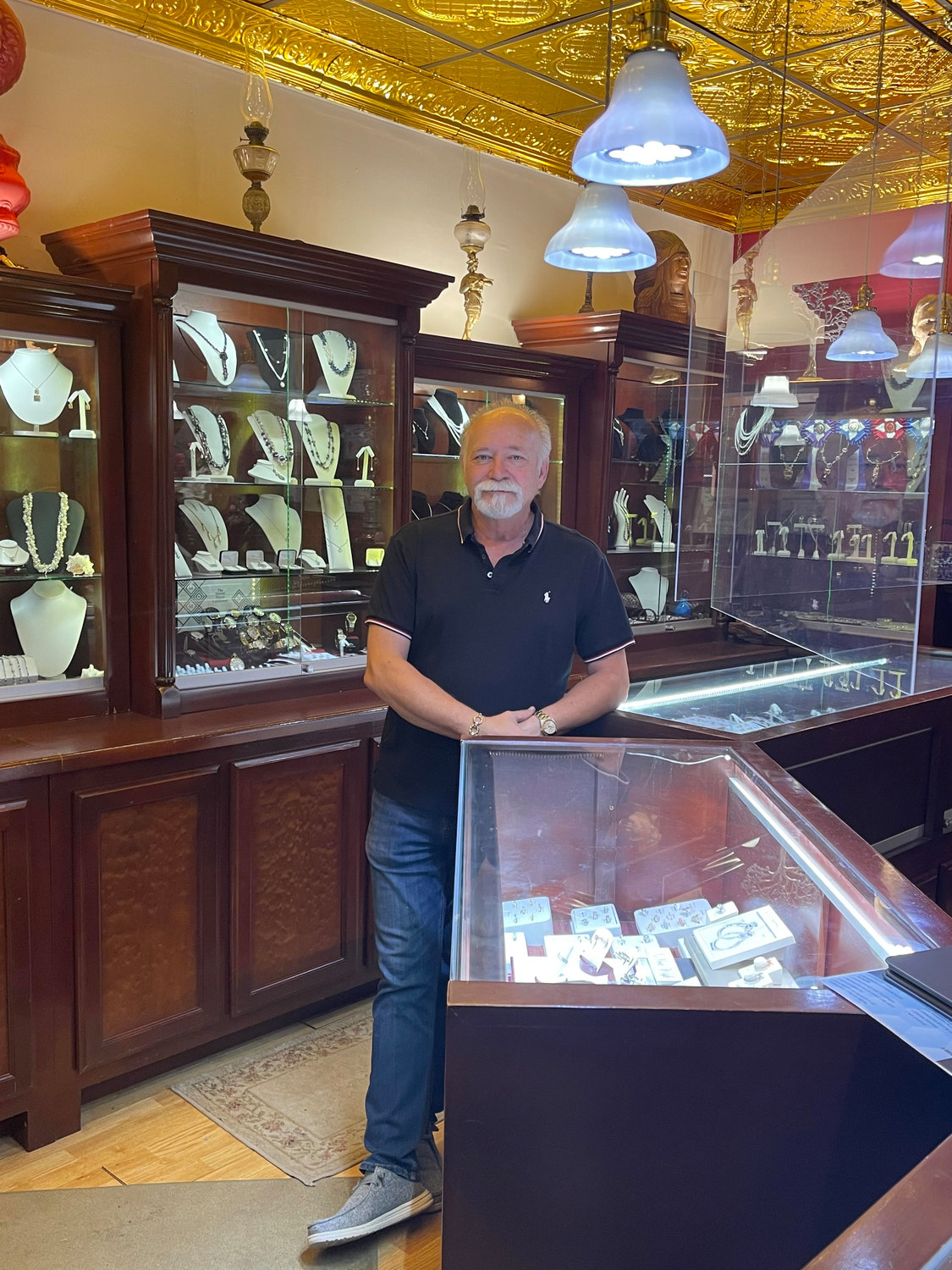 Randy Clair, owner of Clair’s Jewelers holds the title of Master Goldsmith and Award Winning Custom Jewelry Designer. “If someone comes in and buys a ring, I can go in the back and fix it, size it, solder [rings] together-whatever you need I can do it (in house),” explained Clair of his ability and services.
Amber Brand
Posted Wednesday, August 17, 2022 12:00 am
By Amber Brand amberb@marshfieldmail.com

Just down North Clay Street, nestled behind Clair Land and Title is a hidden gem: Clair’s Jewelers. Opened in 2008, Clair’s Jewelers has been creating, selling and winning awards for gorgeous pieces of jewelry for years but the story of this locally owned jewelry store doesn’t start in 2008; it starts in 1979 in Tulsa, Oklahoma.

“I was going to school in Tulsa, Oklahoma at Spartan School of Aeronautics. I was training to be an airplane mechanic,” reflected Randy Clair, owner and jewelry maker at Clair’s Jewelers. “I needed a part-time job that worked with my school hours….One night I decided I was going to go to the mall…and start putting my application in.”

Grey’s Jewelers was the stop that landed Clair a part-time job, but little did he know that that one stop would change the path of his career forever. After passing a polygraph test to get the job, Clair was hired and worked there from 1979 to 1981 before leaving Oklahoma to move back to Marshfield.

“…the end of schooling was in the height of the Carter recession and once I graduated there were no jobs,” reflected Clair. “I was interviewed by the gentleman who was hiring for [an overseas royal family] and he said ‘your interview has gone well and I will give you a job but I need to ask you one more question, do you mind being shot at?’ I said ‘yeah that’s not at the top of my list’.” Clair declined the job offer and went back to work in the jewelry industry-this time at Helzburg.

After a year and a half or so of working at Helzburg, Clair had a realization, “People were coming to Helzburgs and buying from me because of me. They knew me and trusted me. So I just decided to open my own store.”

In September of 1983, Clair opened his first jewelry store in the location that is currently Clair Land Company, Inc. “I ran that until 1989 until a buddy of mine that was a wholesaler in the jewelry business…called me up and said ‘any thoughts at all about closing your store and coming up here (St. Roberts) and running one’,” shared Clair. “So he and I went in partners together on that store.”

Clair stayed there as a partner, driving from Marshfield to St. Robert every day until 1993, “We had a fire and our shopping center burnt…the whole way up there I’m praying dear lord please don’t let it burn us out.” Clair’s prayers were answered, the fire was put out before consuming their store and none of their inventory was damaged, but they had to find a new location. “I was ready to get off the road…I told him (my business partner) I am going to come up once a week and get all the repair work and custom work. I’ll do all the work at my shop and bring it back to you once a week.”

Clair spent the next several years doing custom work and repairs out of the shop in Marshfield. During that time Clair also purchased and ran a dry cleaner shop, within three months of its opening Clair was too busy running the dry cleaners to open his custom jewelry shop back up. “I never really did open this (the current jewelry store location) to the public, I had show cases and everything. People would come into the dry cleaners ‘Randy can you repair this’…I used to tease everybody that I was the only dry cleaning jeweler in the nation,” laughed Clair.

In 2000, Clair was serving as one of the County Commissioners when he purchased his dads real estate office from his mother. “I elected to step away from the County Commission, I loved that job, but I stepped away to concentrate on my private business,” reflected Clair. “But I still had people coming out to the real estate office, ‘Randy can you fix this, can you get me this, I’m lookin for this’…” laughed Clair.

“Then in 2008 when the stock market crashed and everything came tumbling down, there wasn’t any real estate transactions going on….I didn’t know what I was going to do,” Clair reflected solemnly. “I was standing in the shower one morning, water running over my head, I said ‘Ok Lord I give. I don’t know what to do.’ It was like he reached up and tapped me on the shoulder and said I gave you a talent and you’re not using it…so, I opened the jewelry shop back up.”

“I always liked doing things with my hands. Making things, repairing things. The jewelry repair really intrigued me and the custom manufacturing,” reflected Clair. “In Tulsa we had an old German, Carl, and he was a goldsmith. You could go back and he would let you watch him. You didn’t talk to him, you didn’t make any noise…he didn’t want his concentration broken. He would let me stand and watch over his shoulder.”

“When I opened my store here I was originally taking everything to Springfield to have sized by friends of mine. I quickly learned that when people walk into a store and buy a ring, they want to put it on their finger and walk out,” shared Clair. “I quickly came to the conclusion that I had to learn to size rings. My old watch repairman, he said the only way you’re gonna learn is to get in and try it…so I basically taught myself.”

Clair has never had any formal training in the art of jewelry making and repair but that hasn’t stopped him from learning. In fact, some may say that is persistence and desire to learn is what makes him a better jeweler. “In 2014, I joined The Missouri Jewelers Association. It’s an association for independent mom and pop stores. I discovered they had a jewelry design competition,” chuckled Clair. “I was reluctant to enter the design competition but my wife Jan was a driving force encouraging me to go ahead and enter. I didn’t think I was good enough, but she did and persuaded me to go ahead and try. I didn’t think I would win but I thought if I enter I can get up close and personal and know what the judges like and don’t like and next year I can be a real contender.”

Clair took Best of Show and Jewelers choice in 2014, 2015 and 2016. In 2016 Clair also competed in a Midwest Conference, “…it was jewelers from six different states. They only give away one award-Best of Show, and I brought that home. Because I won best of show at the state level, my pieces automatically entered into the National Jewelers of America design competition…All three of my pieces ranked in the Top 15,” reflected Clair humbly. “It was a nice honor.” In 2017, Clair joined the Missouri Jewelers Association as a member of the board of directors where he gets to help judge the competition he competed in for years.

When Clair’s Jewelers first opened, all the jewelry was hand made and designed by Randy himself now you’ll find a mix of wholesale/retail pieces and custom earrings and pendants. “After I started winning all the awards I got so busy doing custom work for customers that I didn’t have time to do the inventory. I still make a lot of necklaces and earrings…but rings take 40 hours and I just don’t have 40 hours,” Clair explained.

“The shop where I do all of my work is an up to date, state of the art repair shop. I have all the latest equipment: laser welder, laser engraver, diamond setting scope, computerized casting oven and more,” detailed Clair of his business. “I carry the title of Master Goldsmith and Award Winning Custom Jewelry Designer.”

“If you (go to) a chain store they do nothing in house, you don’t know where your jewelry is at. If I sell you a piece of jewelry and you have a problem, I’m here,” expressed Clair when asked about why it’s important to shop local. “It’s just service.”

In true entrepreneur fashion, Clair is also in the process of opening yet another business in Marshfield: the highly anticipated The Jackson Street Grill set to open later this year. When he isn’t busy making and designing jewelry, selling houses or working on the upcoming restaurant; you can find him playing in his band Ozarks Travelers or volunteering his time to the Marshfield Development League where he serves as a member of the board of directors.