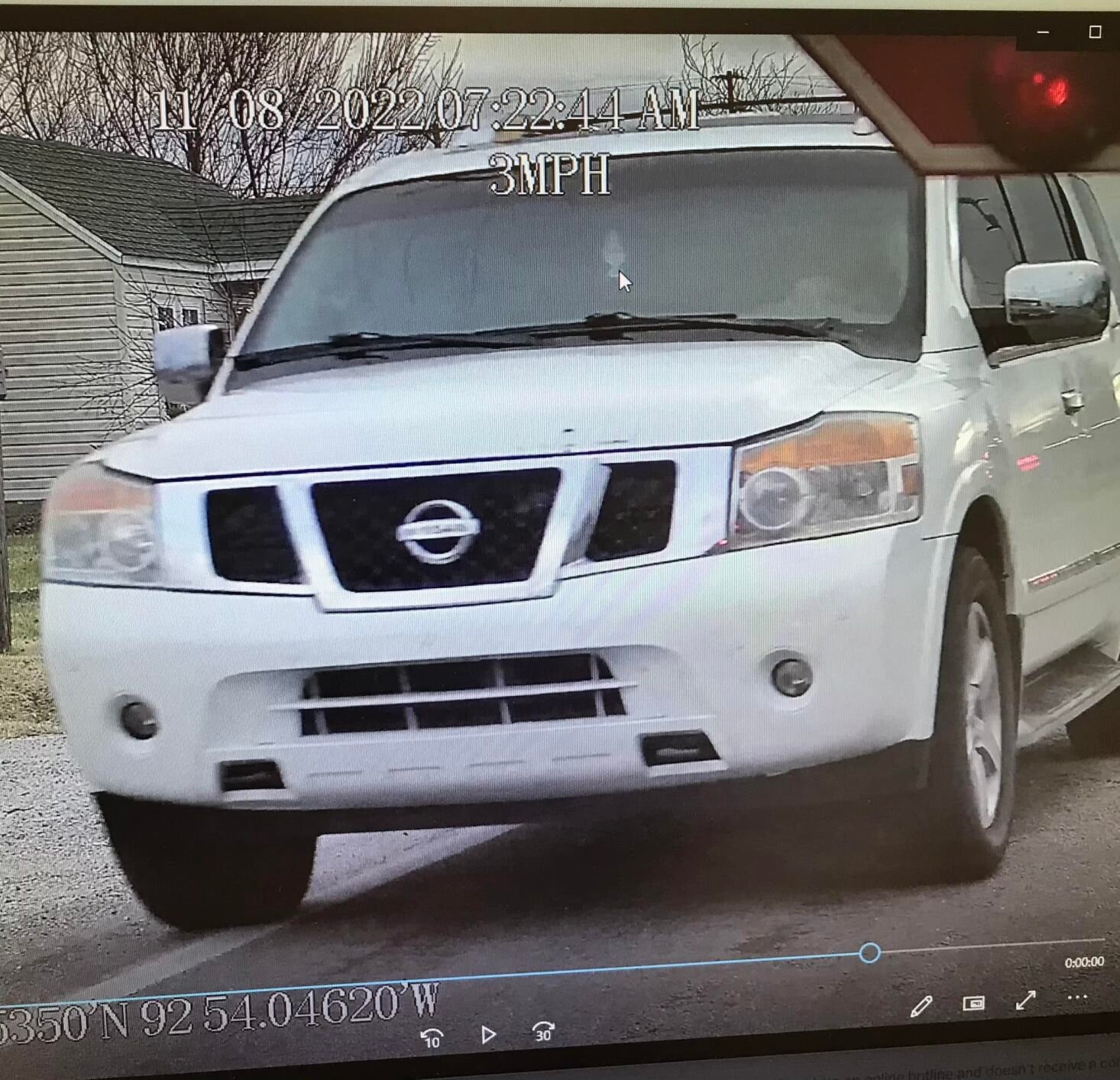 An image captured from a Marshfield school bus of a driver failing to stop at the indication of students loading on the bus on the early morning of Nov. 8. The image indicates that the red flashing lights were on, as well as the extended stop arms(upper right corner). Officer Al Berry will share images of vehicles he is unable to identify with social media in hopes of tracking them down. Photo Contributed by Webster County Sheriff's Office
Posted Wednesday, November 23, 2022 12:59 am
By Alyssa Andrews alyssaa@marshfieldmail.com

Pretend it’s early Tuesday morning, and you’re running late to get your children to school. You are hurdling down the road and you encounter a big yellow school bus just slowing down to pick up a group of kids. Its flashing lights and large red stop sign are hard to miss. This has happened before: you’re stuck waiting at every stop from here to the school and your kids end up late, again. For a moment you consider driving around the bus… just for a moment and then you remember the law:

Missouri Revised Statute 304.050 states that on a two-lane road, if a school bus is stopped and displaying warning signals while loading or unloading children, drivers must stop when meeting and following the bus.

By law, school bus drivers in the process of loading or unloading students must activate mechanical and electrical signaling devices to communicate to drivers of other vehicles.

Drivers should learn to recognize the flashing signal system:

Missouri statute states that any person who violates 304.050 (Stop Arm Violation) is guilty of a class A misdemeanor and could be fined up to $1,000.

Unfortunately, a handful of local commuters are not following the law. But here to enforce it is Officer Berry.

Marshfield’s School Resource Officer (SRO) and Webster County Sheriff Deputy Al Berry has been in law enforcement for 39 years, spending the majority of those years as a traffic officer and criminal investigator. Officer Berry took over the position of SRO halfway through the 2021-22 school year, after Officer John Everest’s retirement. Before Officer Berry, only one or two Stop Arm violations occurred per year, but with the help of the new video cameras installed in the buses, the SRO can catch the act via video.

“My desire is to enforce all traffic laws and so I do this because I think it's the right thing to do… And in this case, we have state laws backing us indicating that school bus violations are very important. We're protecting our kids. We don't want any kids to get hurt,” Berry urged.

Berry takes the safety of students very seriously. He filters through all the submitted film and identifies the commuters who break the law.

Officer Berry has teamed up with Ben Berkstresser, the Webster County Prosecuting Attorney, to put a stop to the ongoing problem.

“The Webster County Sheriff's Office has Al Berry, who is a Deputy with the Sheriff's Office and was placed in the high school as a resource officer. He spoke to me about the enforcement of the Stop Arm Law. With him, along with prior school resource officers, I've always encouraged that I will prosecute whenever, wherever possible if there's adequate evidence of these Stop Arm violations,” Berkstresser explained.

The prosecutor went on to describe the efforts of Officer Berry.

“He(Berry) has been vigilant in pursuing this, as I think he understands how important it is to protect these children in this circumstance. He's probably issued more tickets than anybody that has worked in that position that I've worked with, but I've had lots of them from Marshfield, from Rogersville, from other school districts within the county. So this is not just a Marshfield thing. We care about it everywhere. But Officer Berry has been very aggressive in helping enforce this and hopefully bringing awareness to the issue.”

Berkstresser uses video evidence to determine the severity of the violations as well as a learning opportunity for those who violate the law.

“Whenever these tickets come in, my staff and I review these with the eye of wanting it to be a learning experience and bring awareness. I do care about the accountability required under the law, but most of the time, I'm going to take into consideration all factors. I'm going to listen to the person. I'm going to probably make an offer or a plea offer of some sort that would be less than the maximum punishment or the maximum consequence,” said Berkstresser.

“Because most of the time folks come in they're like ‘I was in a hurry’, or ‘I wasn't paying attention’ and they weren't. They're not bad people or meaning to do anything bad, but now their attention has been grabbed and that's what I intend to do. I'm sure they will be better and more aware of their surroundings and school buses in the future.”

Ultimately, the duo are just advocating for student safety.

“It’s just the gravity of the circumstances… it's different than a stop sign. A stop arm indicates that children are loading or unloading from the bus and while many of them are cautious and aware, children are still children and will do impetuous acts that are unpredictable. Stop arms protect children in those circumstances. I want to make sure that we're protecting the most vulnerable of people in our county,” stated Berkstresser.

“I just want people to pay attention. School buses are there for a reason. They're picking up your future, our future, your grandkids, your kids, and your loved ones, and we don't need someone to lose their life over some action that a person took: not paying attention or driving past a school bus. So just be vigilant when you're driving. Be more observant. Pay more attention and concentrate on the road ahead of you,” added Berry.