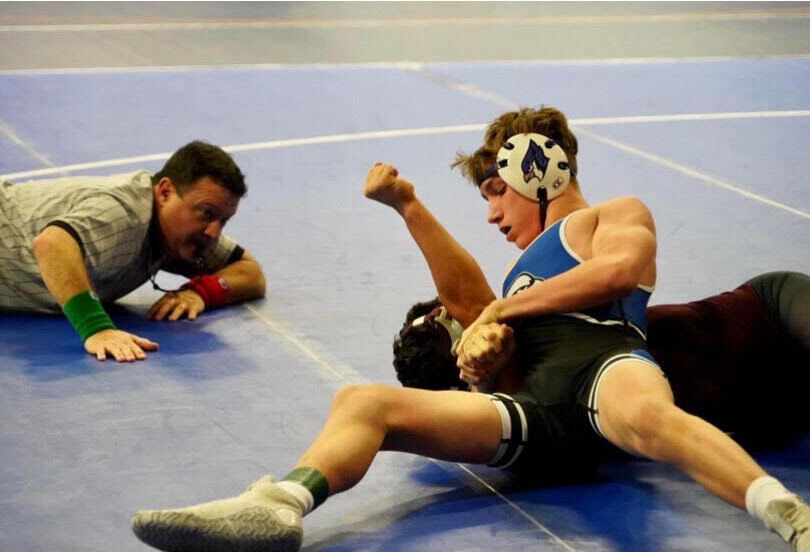 "I am excited for the season to get started... We lost several varsity wrestlers this year so I know it'll look different. ... Last year, being a freshman on the varsity lineup, I felt more anxious. So I am feeling confident going into this year," expressed Varsity Wrestler, 2021 State Qualifier and Sophomore Tanner Davidson. "The goal is always to win. I hope to follow last year's qualifying for state again, and continuing to grow and learn." Contributed Photo by Erin Davidson
Posted Wednesday, November 16, 2022 2:00 am
By John “J.T.” Jones johnj@marshfieldmail.com

Basketball is not the only sport hitting the floors this winter. Additionally, high school wrestling will be begin and Webster County has some very talented athletes ready to hit the mats. The Marshfield Mail reached out to the both the Marshfield and Logan-Rogersville wrestling coaches to get a sneak peek before the season kicks off.

Holt: Our goals for the season are to continue to be one of the best wrestling programs in Southwest Missouri but also have a 70% Win Percentage in Duals, At least 1 Tournament Championship, and Qualify 5 Boys for the State Tournament

Wright: We have several goals in mind. They include: having a team GPA average of 3.0, winning 75% of our last matches in tournaments, Having 20 girls on the active roster, Winning the Big 8 conference, Placing top 3 as a team in all tournaments we enter, and finally, Placing multiple girls at State.

Holt: I am looking forward to seeing how fast our Junior class can mature as they move from JV to Varsity this season

Wright: I am most excited about watching the girls compete and grow and mature as both wrestlers and people.

Carter: We want to get better with each passing day. Our ultimate goal is to get as many kids to the state tournament as possible.

Head on over to our website www.marshfieldmail.com for full interviews.

Heading to the Mats (Logan-Rogersville)

Runner up at Reeds