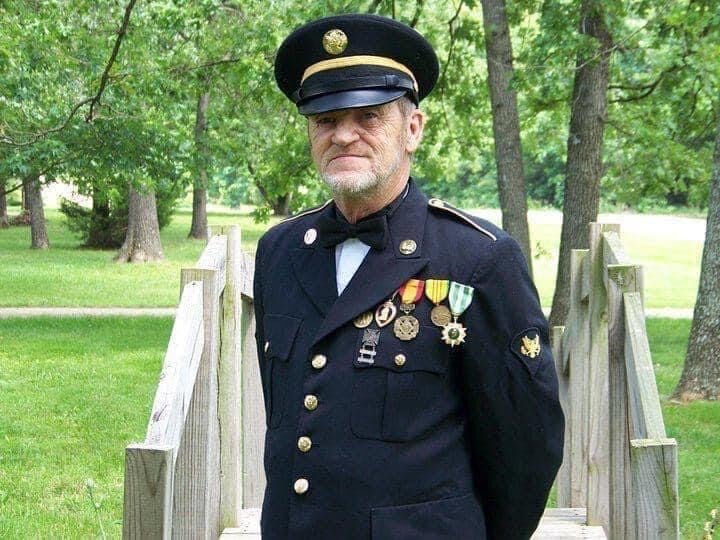 "Now, 54 years after enlisting, 52 years after leaving his vision alongside QL-13/Thunder Road, still legally blind... and after two unsuccessful cornea transplants, this soldier is still willing to fight for his great country," shared Jessie Perkins on her dad's, Larry Perkins, continued commitment to service. 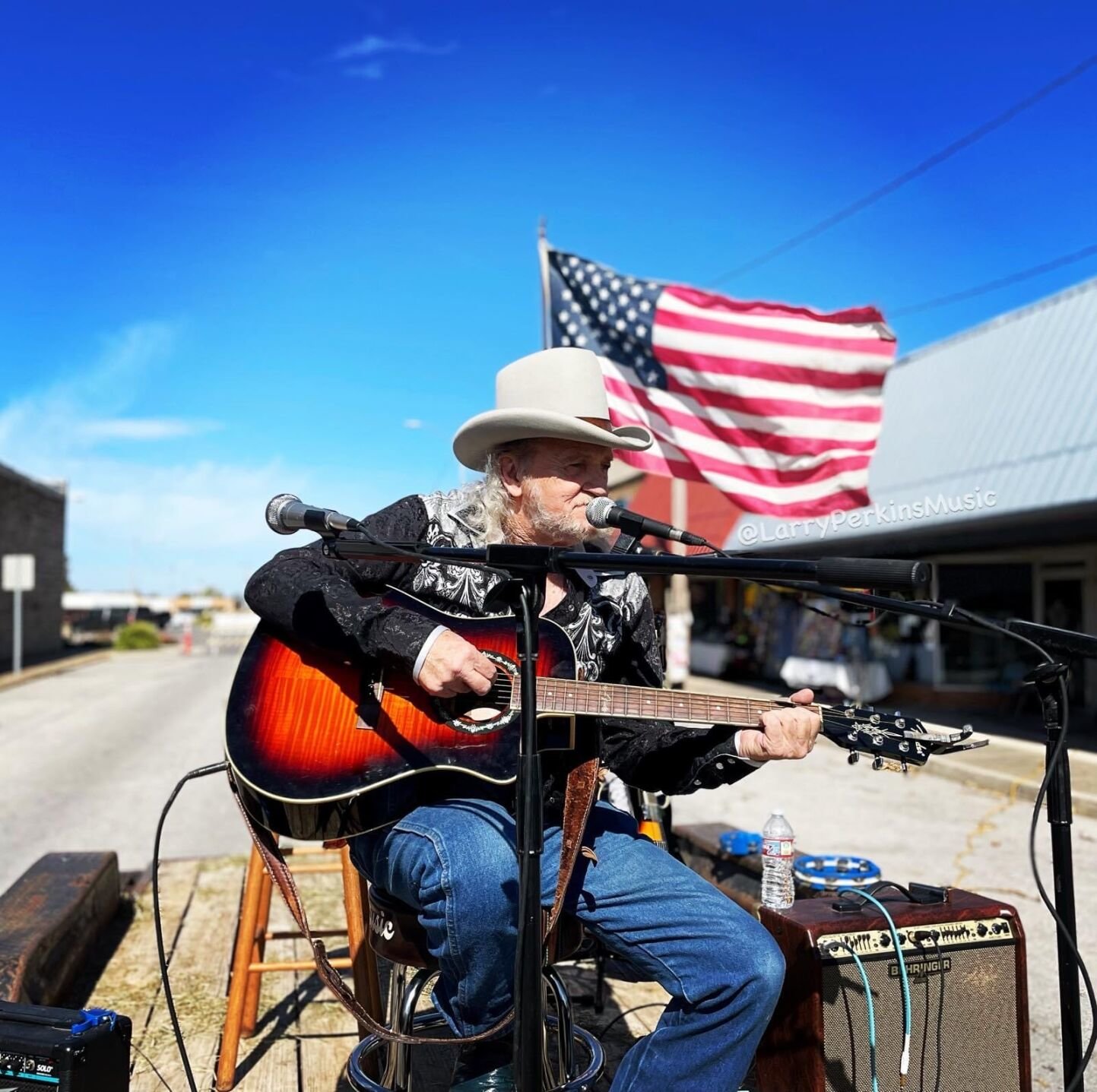 Just a few years ago, (Larry Perkins) became a self-taught singer/songwriter; having already performed at multiple venues in several states, and recording a few records with his own original music. He also owns the live music venue “Perk’s Place” just off the Marshfield square.
Previous Next
Posted Monday, November 14, 2022 2:48 pm

Picture it: Halloween, 1968. At the tender age of 17, with the stroke of a pen, Larry Perkins, a rural Missouri farm kid, enlists in the United States Army. After training at Fort Leonard Wood, Perkins is sent to Germany to build bridges, and it doesn't take his commanding officers long to notice the passion for serving our country that lies deep within this young man's heart. So in a short amount of time, Private Perkins is quickly promoted through the ranks and makes Spec. 4.

Eventually, Specialist Perkins is sent to Vietnam, working as an engineer in a very dangerous part of the country. January 19, 1970, just nineteen days after arriving in Lai Khe, Vietnam, Perkins and his friend, Sgt. Ruperick, are sent to Thunder Road to repair a section of the road that had been blown up. Before they knew it, a land mine exploded as they were driving the grader to their destination. The medics rushed to their aid, and Perkins kept pleading for them to rinse the sand from his eyes, as he couldn’t see anything. He had a job to do, and if they’d just rinse his eyes, he could get back to work. Little did he know, it wasn’t only sand deep inside of his eyes, but rather, it was shrapnel and blood, as well.

Meanwhile, back in Rogersville, MO, Fern Perkins hears a knock at the door. With a lump in her throat and fear in her eyes, she welcomes the local coroner into her home. He explains to her that her boy had been severely wounded in action. That a mine had exploded in young Larry's face, and with shrapnel embedded deep within his eyes, it was likely he'd never be able to see again. With a sigh of relief, she praised the Good Lord that He had sparred her baby's life.

After spending time in a Japanese hospital, Perkins was transferred to the Denver hospital, where he finally began to realize just what had happened. With a face full of shrapnel, worried about not knowing what had happened to his friend, worried about what his future might hold now that his vision went from 20/20 to 20/200 in the blink of an eye, upset because he was up for another promotion but he couldn't see well enough to read the test, and far away from his family. But he made the decision to overcome any obstacles that were in his way. After all, he was a soldier, and a Perkins to boot. And soldiers and Perkins' don't give up.

Perkins returned home at age 19, legally blind and with a head full of memories. Even with extremely low vision, he has since completed college (where he also worked in the university’s VA Office), raised a family, served as a lieutenant in the sheriff’s department’s Ranger program, and has owned multiple successful businesses including a Sinclair™️ station, a saddle and tack shop, a gun shop, his own auction and appraisal company, and an auctioneering school.

Perkins became a self-taught auctioneer in the 1970s and trained his staff to use their hands in a very specific way to catch bids so that he would know by their movements how to read the crowd and how to tell who was bidding. He became so good at this that most of his customers had no idea he couldn’t see them until he requested they direct their bids to his ringmen/women.

Putting his English degree from Drury University to use, Perkins has written several articles for auctioneering magazines and publications, and to this day, he is the only known blind auctioneer Missouri has had.

During his time as an auctioneer, Perkins felt it was his duty to use his talents to volunteer his time and assets to hold benefit auctions for St. Jude’s, veteran programs, multiple local churches, Girl Scout and Boy Scout troops, old folks homes, community members, and more. It has always been important to Perkins to not only serve his country but to give back to his community, as well.

In 2013, Perkins’ optometrist explained that they finally developed the technology to perform eye surgery without risking disturbing the shrapnel and making things worse, and so he was scheduled for a cornea transplant. On his 45th anniversary of the day of his enlistment, he returned to the eye surgeon to have his eye patch removed. For the first time in 43 years, Perkins was able to see the stars again. Unfortunately, this was short-lived, as his body rejected the transplant a short time later. The doctors later attempted a second cornea transplant, which didn’t take, and caused Perkins the need to have his lens removed in that eye. Perkins doesn’t feel those were failed attempts. In fact, he’s extremely grateful to the cornea donors for giving him the opportunity to see the moon and stars, the beauty of his wife’s eyes, and the precious faces of his children and grandchildren; even if only for a moment.

Perkins spent more than forty years in the auction business before retiring, and just a few years ago, became a self-taught singer/songwriter; having already performed at multiple venues in several states, and recording a few records with his own original music. He also owns the live music venue “Perk’s Place” just off the Marshfield square; where not only amazing local artists have played, but notable artists such as members of the Ozark Mountain Daredevils, as well.

Now, 54 years after enlisting, 52 years after leaving his vision alongside QL-13/Thunder Road, still legally blind but with vision of 20/400 now, and after two unsuccessful cornea transplants, this soldier is still willing to fight for his great country. To sacrifice for people he doesn't even know. Volunteering to bring hope and happiness to his fellow wounded vets through his musical abilities. Perkins currently works with other veterans, to help them through their post-trauma issues. He also visits hospitals and the homes of Hospice patients, sharing his love of music.

Only recently, Perkins acquired a few low-vision devices that allow him to read, watch grandchildren’s ball games and enjoy wildlife with his wife in their yard. He’s now able to read a few books of The Bible each day, as well.

To those of you who have remained with Perkins since his military days, and to those who met him along the way and are still here, you know that we are blessed to have such a man in our great community.

Be sure to pick up next week's edition of the Marshfield Mail for the third and final segment of our "Thank You to Veterans" series. Have a veteran in mind? Email news@marshfieldmail.com with name, photo and contact information.