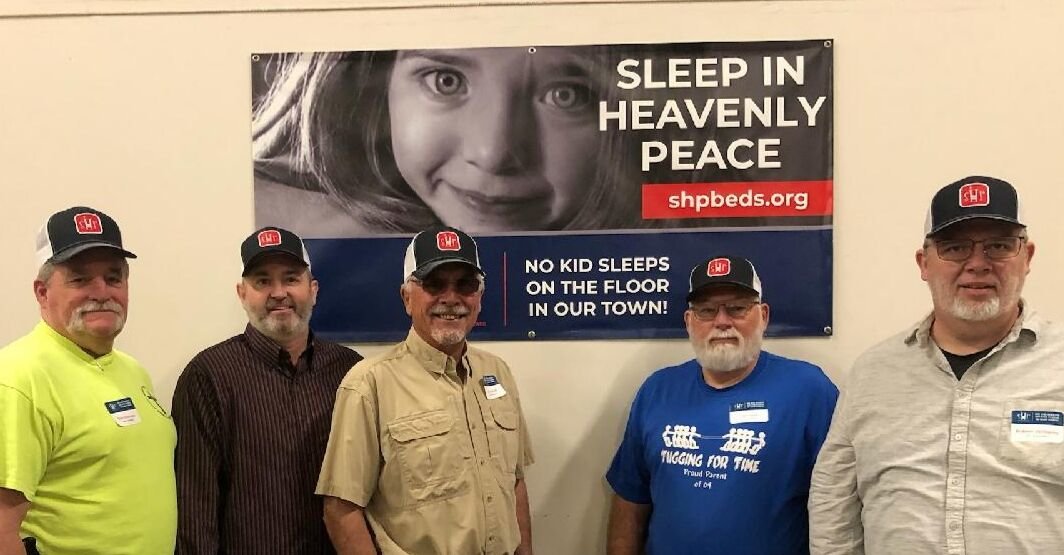 The Thursday, May 6 Marshfield Chamber of Commerce meeting hosted guest speakers Robert Williams and Allen Balmer for the board to learn more about their new non-profit, Sleep in Heavenly Peace. The pair explained how five long-time friends of over 25 years came together to start a local chapter of SHP. The mission aims to ensure that “no child sleeps on the floor in our town.”

“I was sitting in a lunchroom at a Honda plant in Alabama and a friend of mine was sharing story after story of families and children they had served through SHP,” Balmer explained. “And there I was, a grown man weeping and sobbing in the middle of the cafeteria.”

Balmer realized the issue of child bedlessness is prevalent nationwide, including in Marshfield. Upon his return, Balmer introduced Sleep in Heavenly Peace to the group and they decided to run with it. The local SHP team is dedicated to finding and providing the resources, logistics and labor necessary to ensure every bed-less child in Webster County has a bed. The organization believes that all children deserve to have a safe, comfortable place to lie their heads each night.

Robert Williams has been around Marshfield since the early 90s and his family has been involved in the Webster County community since then. As a former city alderman and mayor, Williams was extremely involved within Marshfield. He’s almost one year removed from that position but has found himself wanting to see the community address current issues as the town continues to grow.

““We put kids in beds. We do not believe that adult problems and adult decisions are kids faults, we simply want to put them in a bed. We need to make sure that no kid sleeps on the floor in our town,” explained Williams. “I never realized this was an issue when I was serving Marshfield, but the reality is I myself was bed-less for two years in high school.”

He recalled how his family had moved into a small home without room for everyone to even have a bedroom, living below poverty line. According to Williams, he resonates with many of the issues that stem from child bedlessness.

“It can take kids years to overcome the physical issues caused by not having a place of their own to sleep at night… what if there was a way to ensure no kid sleeps on the floor in our town? How can this problem in our area be solved?” he asked. “We want to see our kids, our families and our overall community do well.”

There are over 260 chapters throughout the United States. The Webster County core group went to San Antonio to connect with other chapters and complete training. Here, they learned that between 2-3% of any given population are actually children between age 3-17 that do not have their own bed.

“People wonder if this really impacts a child but we’ve talked to several school counselors, superintendents and all of them will tell you a good night’s rest is one of the major factors in how a student performs in school,” stated Balmer.  “Consequently, it’s a major factor in how they perform in life.”

“Bedless kids may be sleeping on the floor, they may be sharing a bed with multiple people or even sleeping on a pile of clothes,” Williams added. “I actually slept on a cot in a closet and my senior year, I actually quit school. Was it solely because I didn’t have a bed? I don’t think I could say that but it was definitely a contributing factor.”

Williams was surrounded by great educators and friends who talked him back into finishing school, he said what changed the trajectory of his life was entering the military, which provides everyone with a bed. However, he recognizes that not everyone gets that opportunity.

“The census doesn’t ask this question, they don’t come into your home and ask where your kid is sleeping so this is not data that can be easily found. But the 2-3% estimate alone is an astounding number,” said Williams. “Statistically, 1 out of every 5 children in Missouri live in poverty. Webster County has a population of 40,000. There’s approximately 2,250 children living in poverty and according to nationwide statistics of bedlessness, about 1,250 that do not have their own bed.”

According to Williams, these numbers are no surprise to educators or social workers who are around our counties children because they see it all the time.

“In the Marshfield school district, there are over 17,000 students. Statistically, that would mean over 500 children do not have their own bed,” he stated. “It’s a worthy cause to try to eliminate poverty in general, but it’s simply not our mission. The mission is to address the unfortunate circumstance of kids not having a bed by addressing the financial, material and volunteer resources in our community to help out kids and make sure they have their own bed.”

According to Willams and Balmer, SHP beds are completed through bed builds, which cost around $200 per bed. When SHP hosts builds, they will be done in 20 or 40-bed sessions.  The cost of these builds will be either $4,000 or $8,000.

On Friday, May 14 the core team will meet at Terry Arndt’s shop to kick-off its chapter and complete its first 10-bed build. This build is sponsored by John and Marty Foglesong, Adam Blanch and Carl and Karen Gore. Materials are being provided by Marshfield Lumber. The build will produce 5 bunkbeds, which will yield 10 children in Webster County having a safe place of their own to lie down their heads. A bed build is performed remotely at one location. Bed pieces are built and ready to be assembled once they arrive at the child’s home. The first 20-bed build will take place on June 12, with help from the community.

Once the May 14 bed build is complete, the group will be accepting applications for the first 10 beds through the Marshfield branch on shpbeds.org. SHP is currently raising $4,000 in funds to support the 20-bed build set for June 12 and hopes to be able to do partnerships builds at local businesses in the future. Partnerships would include the use their location as a build site, giving props to the business who is sponsoring it. According to Williams, members of that organization will also assist with building the beds.

“We’re really exited to do this. While SHP is not a faith-based organization, the men who are bringing the chapter to Webster County are spiritual,” Balmer said. “Something that resonates with us is Psalm 4:9 which states, “I will lie down and sleep in peace, the Lord, you make me live securely.” As well as Proverbs 3:24, “If you lie down you will not be afraid. When you lie down, your sleep will be sweet.” That’s what we want, peaceful secure sleep for every child in Webster County.”

Rest is a major factor in a child’s school performance, self-esteem, social connections and friendships as well as overall mental health. SHP believes addressing those children without a bed in our community can make a difference in all of these areas.

“We get asked where we’re going to find kids who need beds, but we will have connections with social workers, counselors, nurses, community health organizations… all kinds of people who already have that knowledge,” Williams added. “The reality is, having places to put the beds is not the issue… most SHP organizations have an application list that far exceeds what they’ve been able to produce so far. The need is there.”

For more information on upcoming bed builds, find them on Facebook at Sleep in Heavenly Peace – Mo, Marshfield. Those who are interested in developing a partnership, volunteering or donating to the cause can reach out to Williams at (417) 234-4786 or robert.wiliams@shpbeds.org.