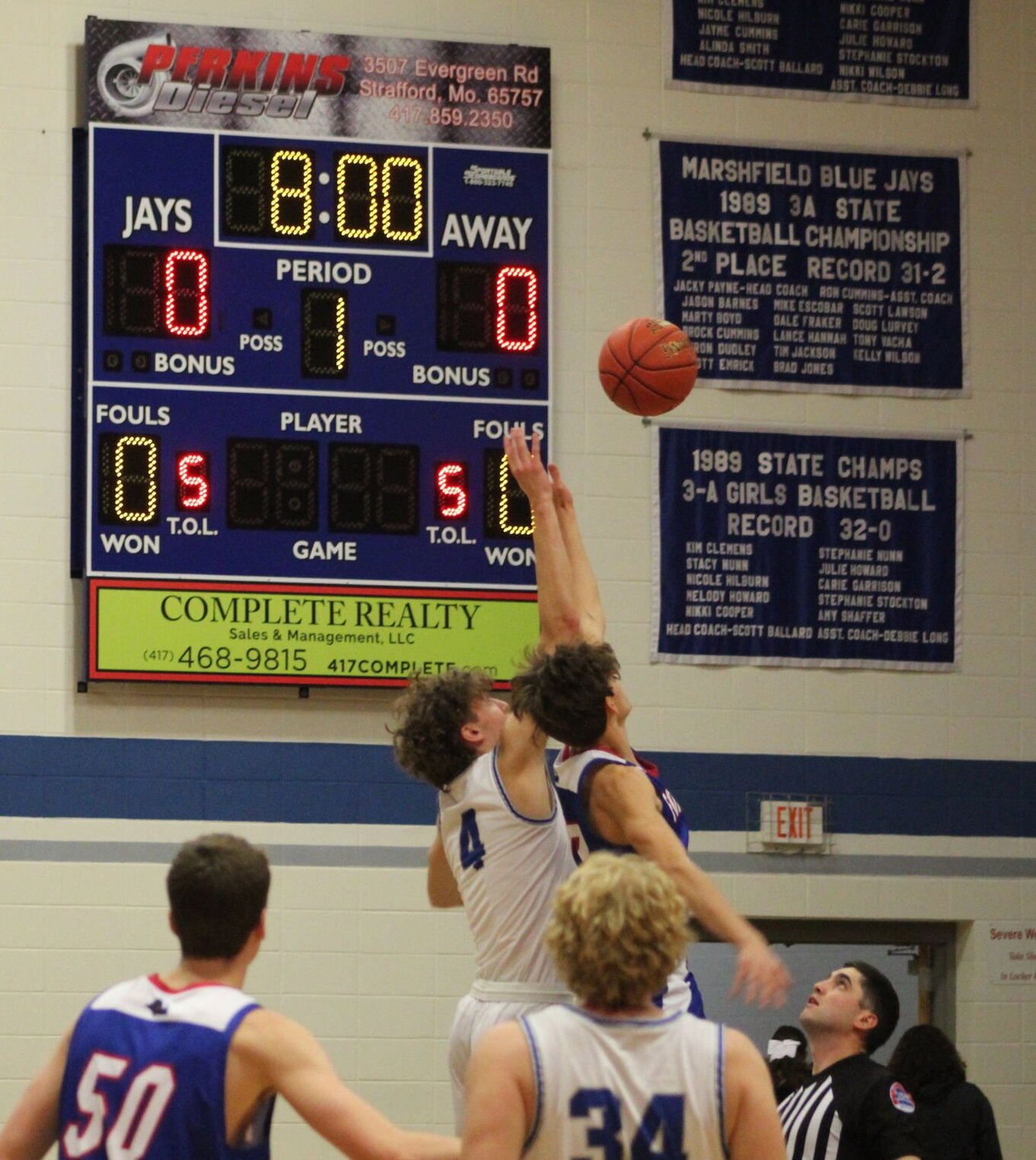 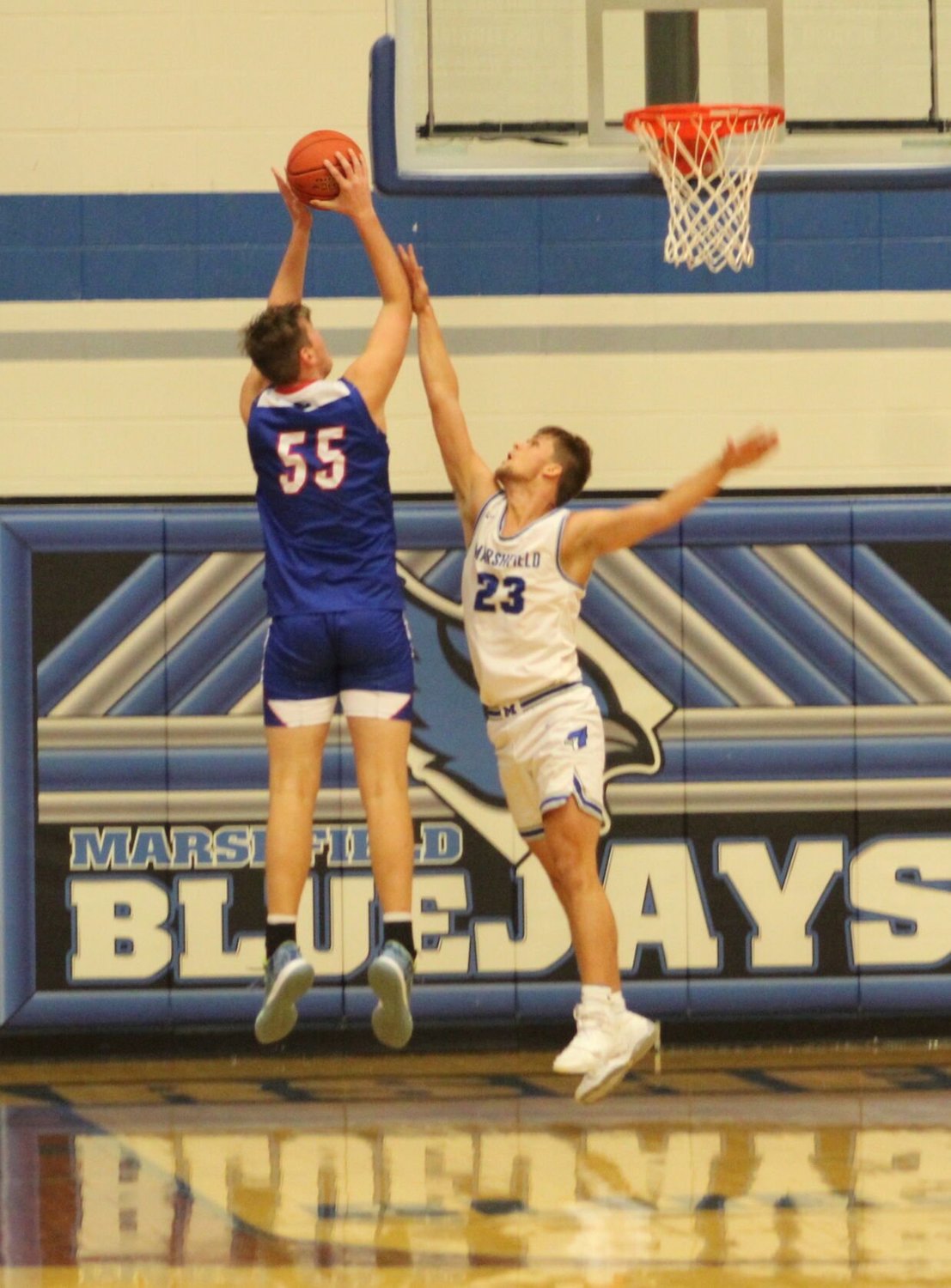 Jumping up to block a shot is Senior Zack Mings. 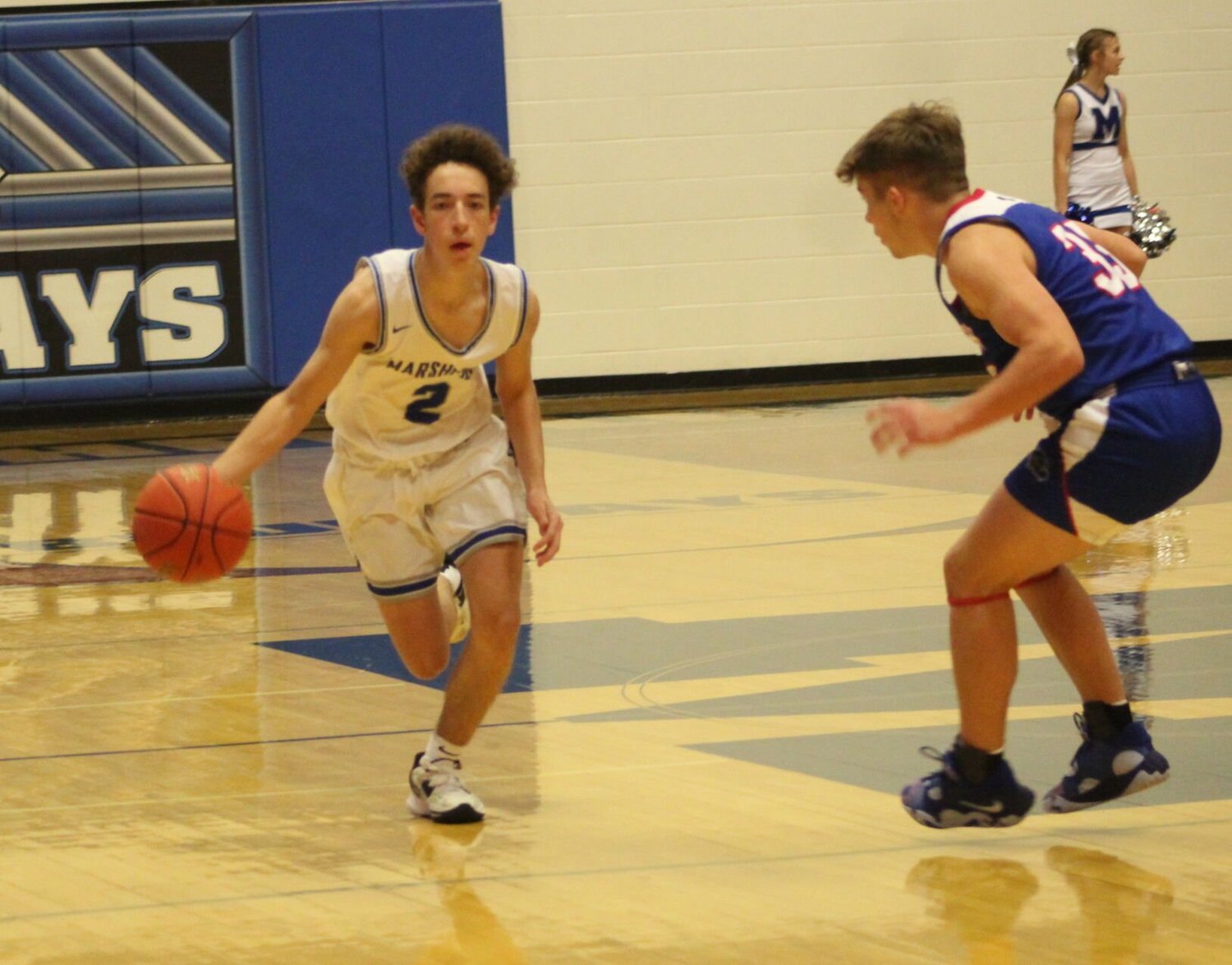 Sophomore Tegen Curley runs down court and would score a total of 13 points in Marshfield's opening game against Forsyth. 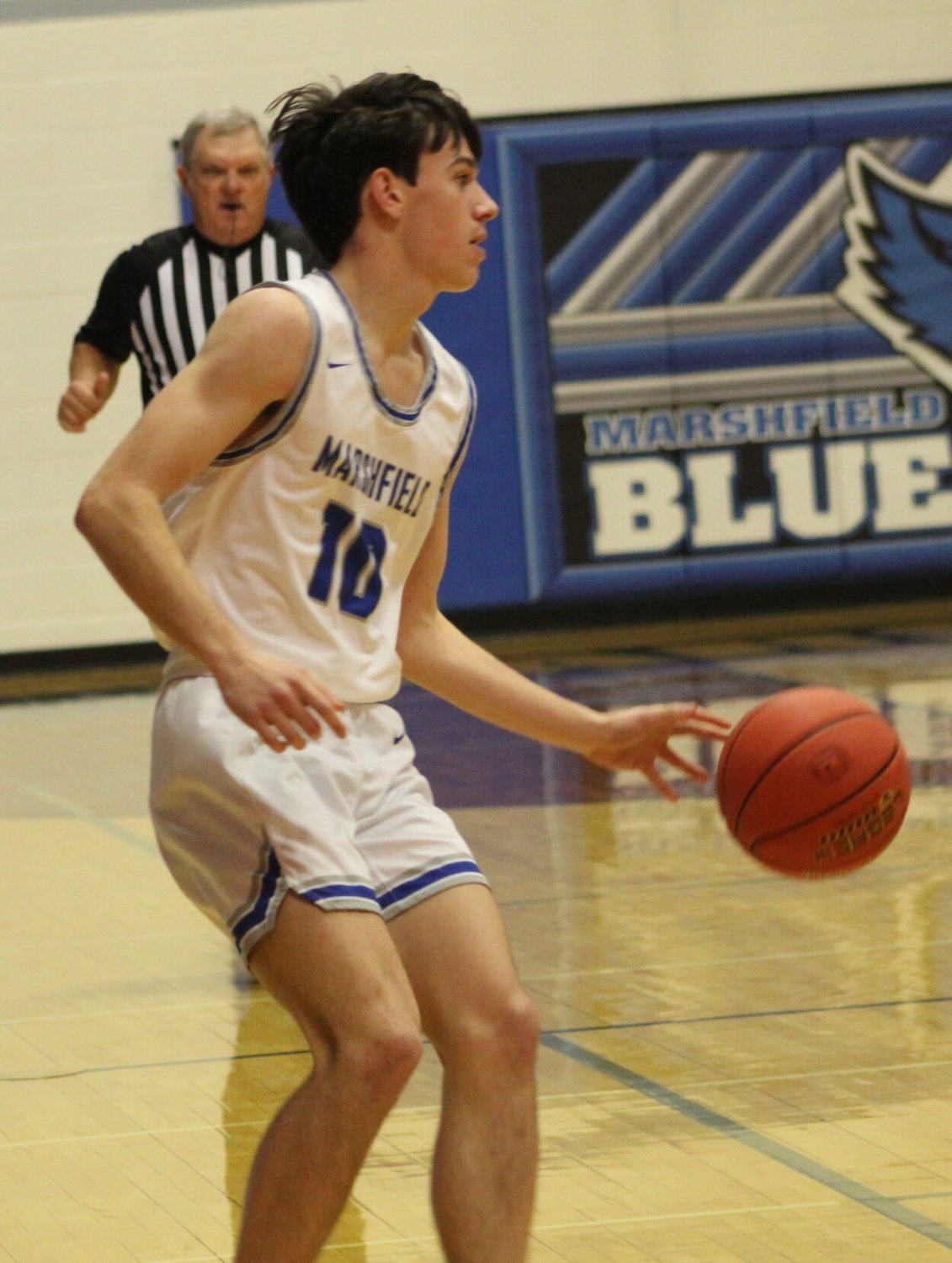 Sophomore Brayden Hicks looks an opportunity to make a pass or shoot the ball. 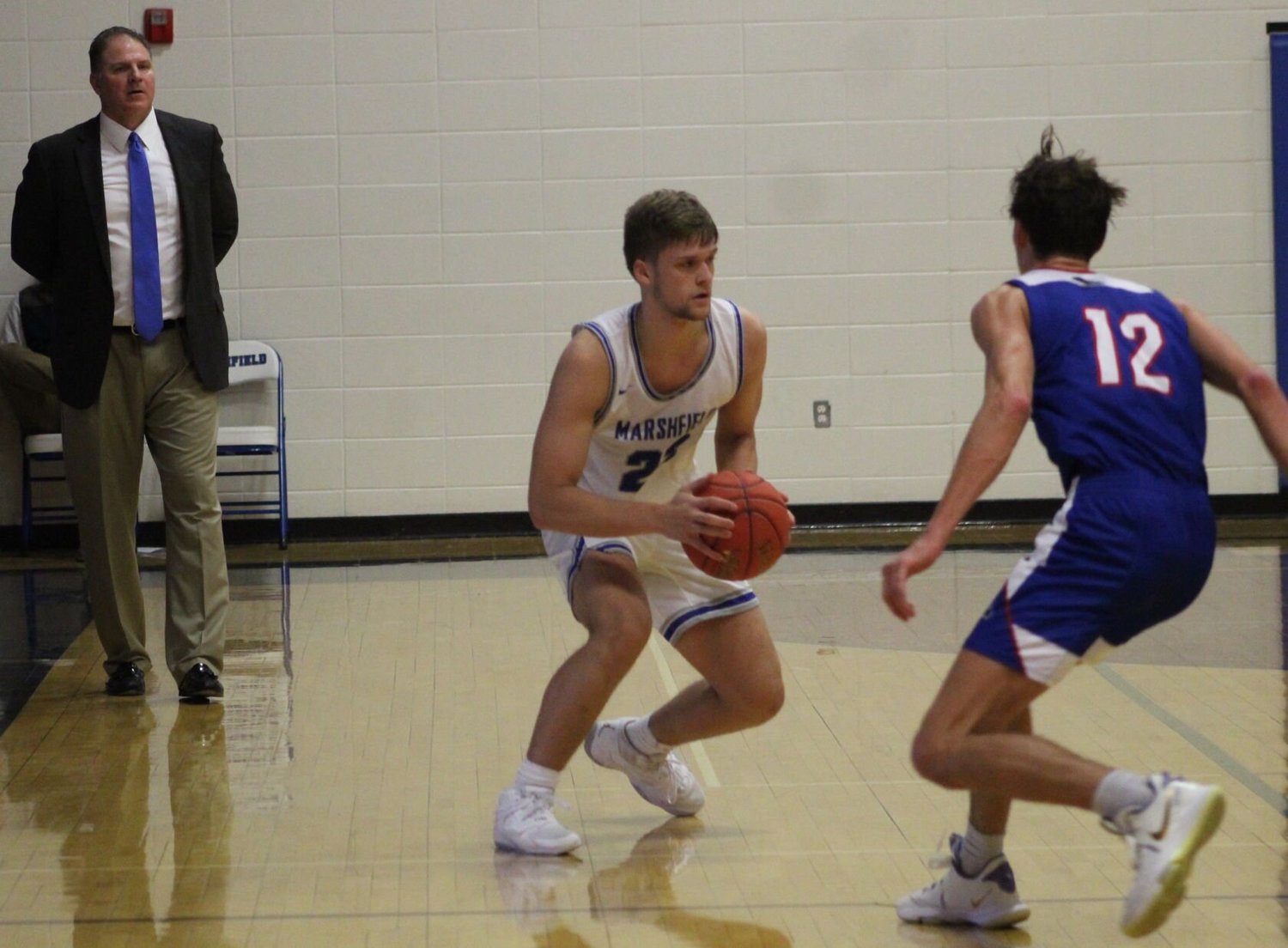 Senior #23 Zach Mings moves down the court against Forsyth. Mings would go on and be the top scorer for the Jays with 21 points.
Previous Next
Posted Wednesday, November 30, 2022 2:00 am
By John “J.T.” Jones johnj@marshfieldmail.com

Hitting the courts and starting their 2022 season was the Marshfield Boys basketball team. The Jay's first opponent of the season was the Forsyth Panthers. The first quarter appeared to be an even match with a score of 17-17. During that same quarter, Marshfield would score a trio of three-pointers: two by #2 Merrick Dennis and by #4 Tegen Curley. The rest of the game, though, would see the Panthers prowl and lead the board. The game would end with Forsyth winning 70 to Marshfield 62.

"We have a lot to learn from this game," explains John Cherne III, Head Coach for the Marshfield Boys team. "We did not move our feet well and used our hands too much, so we have some things to work on and get better at."

Game one players and stats:

As of the writing of this article, the Marshfield boys' team won their first game in the Pierce City Invitational Tournament against Exeter 77-45 on Monday, Nov 28. The tournament will end on Friday, Dec 2.