Cardinals ready to roll this season 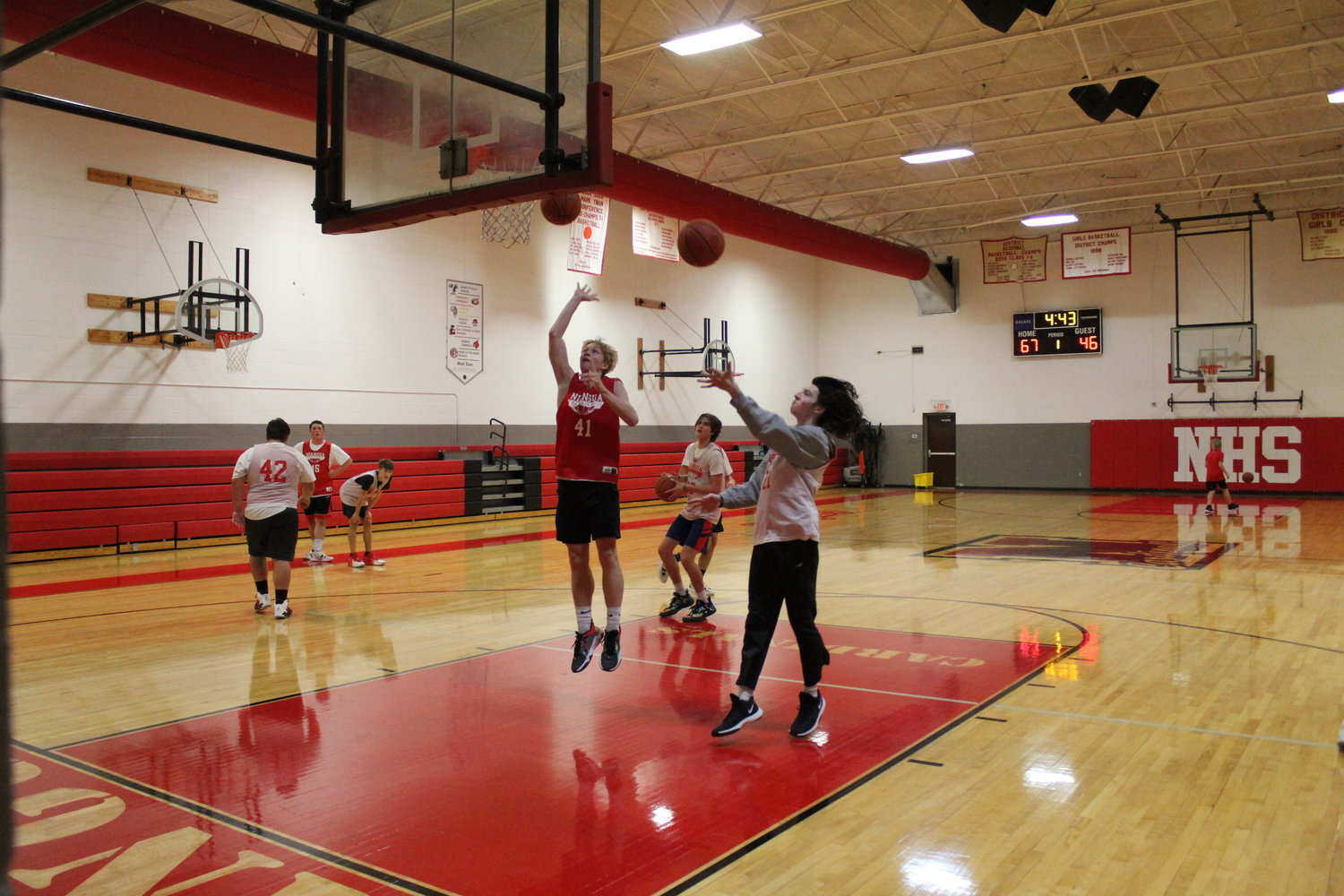 Niangua boys held a morning practice Nov. 8 starting at 5:30a.m The team worked mainly on offense this practice with drills that required them to beat a shooting goal.
Mail photo by Abigail Swanigan 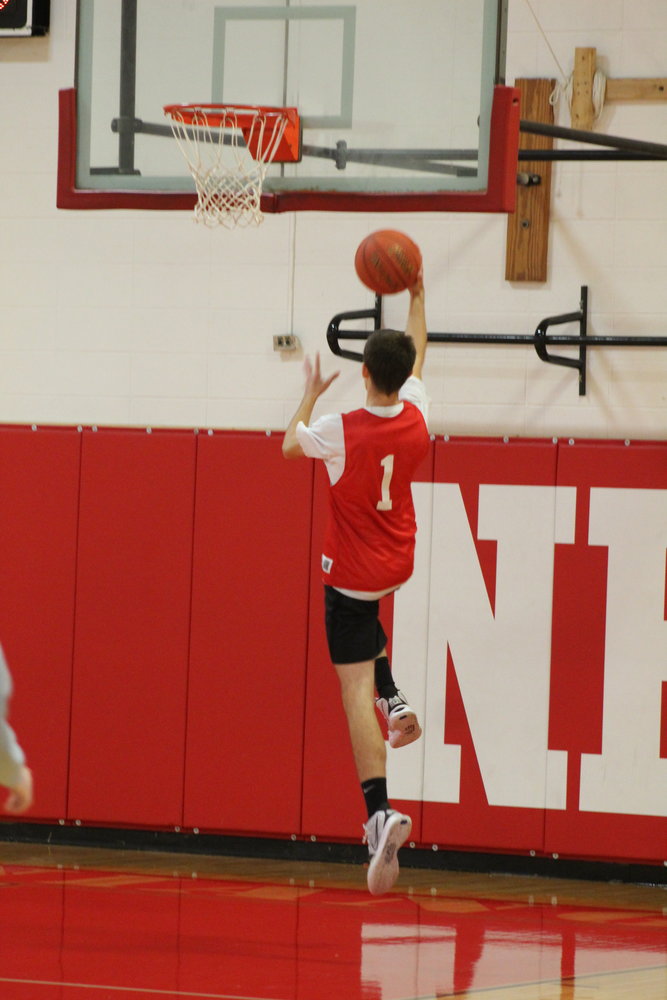 Andon Hamilton, Junior, goes up for a lay up during the teams practice. Hamilton mentioned that he wants to be better than last year as well as make it to the conference championship.
Mail photo by Abigail Swanigan 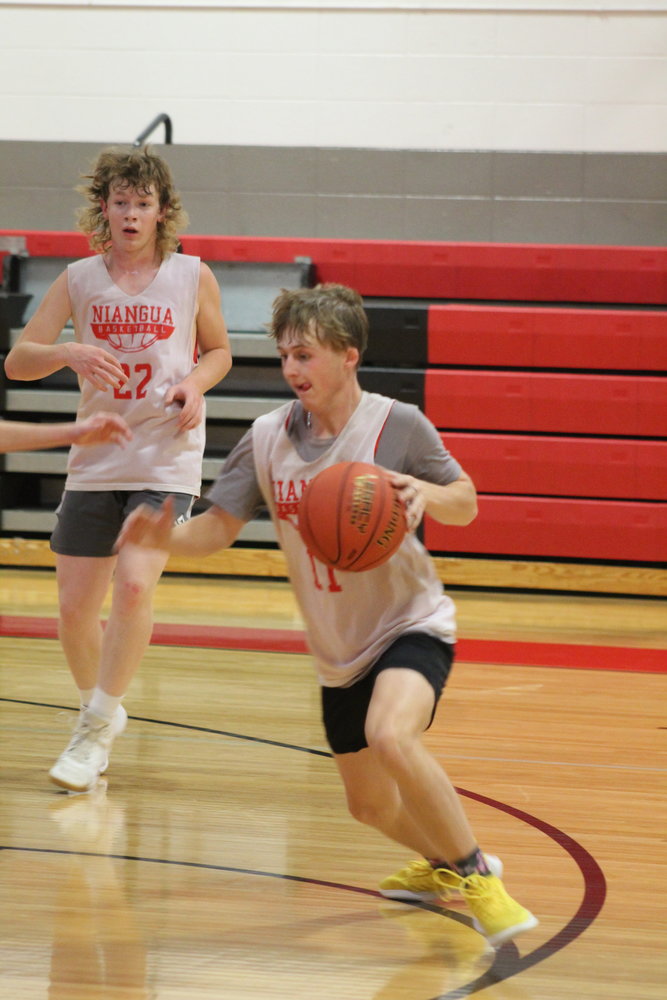 Junior Brayden Johnston works on his offensive skills while being defended by a teammate. The team this year can be said to have great team leadership. The entirety of the practice, the boys were talking and encouraging each other during the tough full court drills.
Mail photo by Abigail Swanigan
Previous Next
Posted Wednesday, November 10, 2021 8:00 am
By Abigail Swanigan abigails@marshfieldmail.com

The Niangua High School boys basketball team ended last season with a 10-14 record. Playing in round two of the Class 1 District 4 Tournament the team looks to improve its record this season.

Coach Kalem Copling is entering his sixth year with the team. The Cardinals are returning four starters with seven letterman from last years 10 win team, which was the most wins for the Niangua team since the 2013-14 season.

“We are still a young team with over half of the team being sophomores and freshmen this year,” stated Copling.

The team returns two juniors, Andon Hamilton and Brayden Johnston, who both saw significant playing time as sophomores with Copling adding that they “will look to have even bigger roles this year.”

“I feel really confident,” said Johnston. “Last year we had all of the freshman come in and it was hard for us to get back into the grove of things. Last time we played with those boys they were seventh graders. But, I am really looking forward to it. These boys have worked hard all summer. We deserve a lot this year, and I think we can make it to districts and go even further.”

“I am looking forward to getting to play with the young guys this season,” stated Hamilton. “The sophomores are only better than what they were last year and I think freshman Tanier Dunn will be a good addition to our team. I think our record will end at a better standing than what it was last season.”

Five sophomores, Ross Stuber, Hunter Cantrell, Evan Kochs, Ethan Scheetz and Clayton Henderson, will be returning to the Cardinals. These boys played as freshmen and look to improve even more as sophomores.

Coach Copling has started every practice with a quote, The morning practice on Nov. 8 had the quote, “When no one cares about the spot light we all shine” Copling mentionined that he is “trying to emphasize that if the entire team is working together as one then they will all come out on top.”

Newcomers to the program are senior Jake Ivie; juniors David Donaldson and Jackson Venolia; freshman Tanier Dunn. “All four have the skills to play at the varsity level and will be working to show who can make an impact at that level in games,” mentioned Copling.

The team will begin its season at Seymour High School on Nov. 19.

“This is a great group of young men,” said Copling. “They work hard in practice and are great role models in the school and community. This group loves to share the ball and play as a team. We are excited about this upcoming season and the steps to move forward to become a really competitive program.”

Round Up: Paving the way to Books

Financial Excellence for City of Marshfield