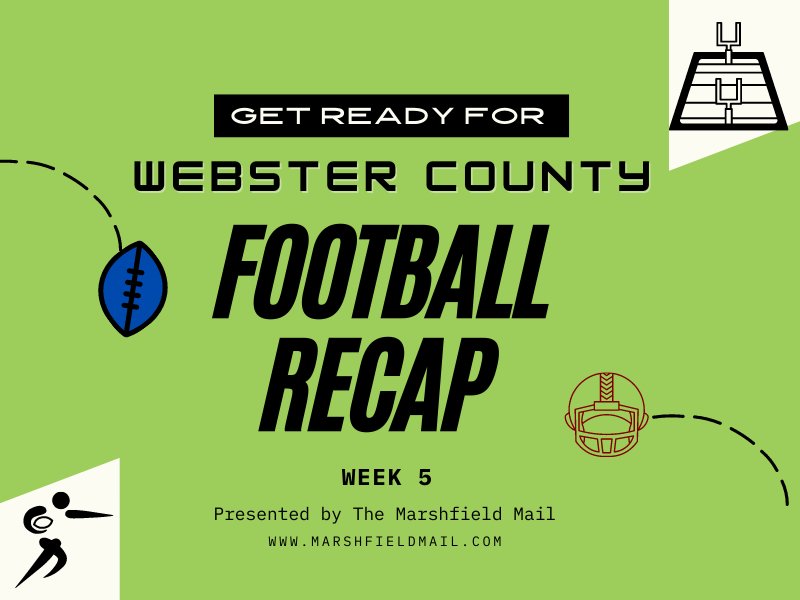 Another week has passed in the world of fall sports, week five to be exact, so how did the football teams of Webster county fare against their opponents last Friday?

Let's kick off with Marshfield Bluejays, who flew into the Reed Springs Wolf den this week. The game would be a tug and pull between the Wolves and Jays. Marshfield would make produce three touchdowns, including #3 Marcus Gritts who made a 75-yard touchdown kickoff return during the first quarter. However, despite their best efforts, the Jays would fall short to the howling team of Reed Spring, who would win the game 26-19.

Forty-three miles away, Strafford took on the Central High School Bulldogs. Strafford would have a few plays up their helmets, fast feet, and hands including #1 Silas Morton, who, after Central fumbled the ball, would not only recover but run the ball down approx. 15 yards for a touchdown. #82 Isaac Berg got Central’s attention when he intercepted a pass and ran the ball roughly 10 yards during the second quarter. That same quarter #7 Jourdyn Edelstein would make a 28-yard pass to #4 Bradlee Mullins, fighting for some Stafford momentum. But, try as Strafford might, they fell to the Bulldogs who won the game 21-10.

Looking into this coming Friday, Sept 30, Strafford (2-3) will play at home against Fair Grove (3-2). Speaking of home, this week is Homecoming for the Marshfield Bluejays (2-3)  who face off against the Aurora Houn Dawgs (1-4). Both games start at 7:00 pm, see you at the game!

Young Indians have room to grow