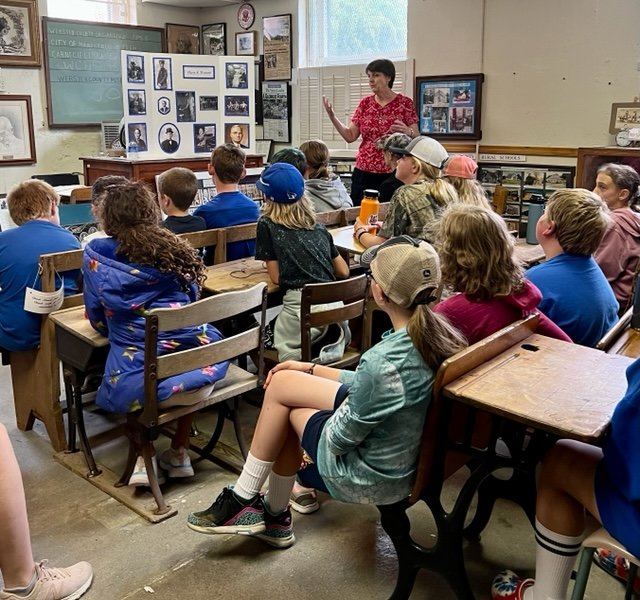 Contributed Photo by Lina Dickenson Students from Marshfield’s Hubble, Webster and Shook Elementary visited the Webster County Historical Museum on May 16, 17 and 19.
Posted Wednesday, May 25, 2022 1:45 pm
By Lina Dickenson

After a two year hiatus due to COVID-19, the Webster County Historical Society were pleased to welcome students from Marshfield’s Hubble, Webster and Shook Elementary Schools to the Museum on May 16, 17 and 19. In all, over 40 classes took part in the event which totaled over 1,000 students.

While waiting for their turn to enter the Mueseum, students learned about the history of the district 1911 Museum (formerly a Carneige Library) and Andrew Carnegie who awarded Marshfield a $5,000 grant to build the library. At the time, Marshfield was the smallest town west of the Mississippi River to receive a Carnegie grant. It was interesting to note, that Marshfield High School band students recently had the honor of performing at Carnegie Hall in New York City.

One inside, students learned about 1880 Cyclone, Transportation, Callaway Cabin and Harry Truman. Speakers were Cathy Zimmerman, Lorri Herring, Larry Rose and Lynn Fair assisted by Linda Dickenson, Bill McFadin, Becky Choate, Diana Barnett and Linda Blazer. On April 18, 1880 Marshfield was nearly destroyed by a cyclone. Students leaned about how the means of transportations had evolved over the years. The Callaway Cabin, now located in Hidden Waters Nature Park having been moved there from the Callaway farm several years ago, was of interest to most students as they had visited the Cabin. Shook Elementary students also learned about Harry Truman’s whistle tour stop in Marshfield in 1948.

Some classes also visited the Library, the Courthouse the Hubble Telescope, the Dickey House and had lunch at the park.