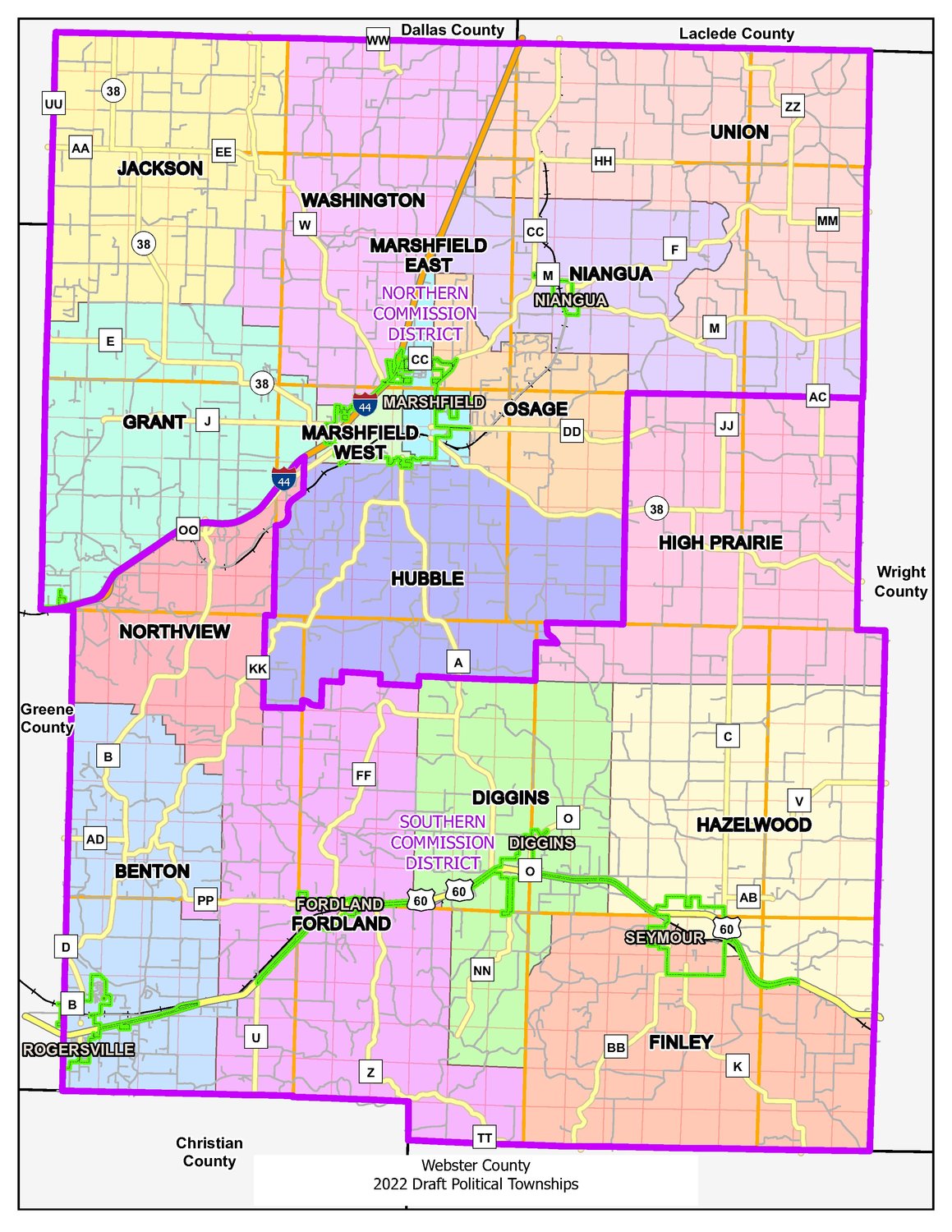 Thanks to the hard work of Webster County Clerk Stan Whitehurst and Deputy Clerk Missy Pickel, here are the new 2022 Voting Districts (Townships) for Webster County. Residents located in Osage, Jackson, Washington, and Hubble are encouraged to verify their voting location before Aug. 2. If unsure about the voting location, please call the County Clerk’s office at 417-859-8683 (VOTE) or visit www.webstercountymo.gov/polling-location-list
Photo Contributed by Webster County Clerk.
Posted Wednesday, July 27, 2022 12:00 am
By John “J.T.” Jones johnj@marshfieldmail.com

On Aug. 2, the primary election will be held across the nation, including here in Webster County. Positions up for election in the county include Collector, Prosecuting Attorney, Treasurer, State Auditor, Presiding Commissioner, Circuit Judge, County Clerk, Recorder, U.S. representatives, and Senators. Knowing the candidates is one thing, but knowing where to vote is just as important.

The 2020 Census was completed and published Mar. 31, 2022, two years late due to the pandemic. According to census.gov, Webster County has an estimated population of 39,735 in 2021, and 36,202 in 2010. With the jump in population, the County Clerk was faced with the large task of reorganizing and creating new voting districts within the county. This meticulous job was completed by Webster County Clerk Stan Whitehurst and Deputy Clerk Missy Pickel.
With the increase in population, two townships, also known as Voting Districts, within Webster County changed boundaries and a new township was created.
Those living in what was previously known as the “East Ozark'' Township have been split between the “Hubble” Township, and the remaining residents drawn into a new township named “Osage.”

“We thought about these names (the townships) for a long time,” explained Whitehurst. “Hubble encompasses the area that used to be the Hubble Fruit Farm and its historic ties to the Hubble family. The name Osage was because of the Osage River headwaters that run through that area. Along with a church and road that also share that name.”

Additionally, the border between the townships of Washington and Jackson has changed, however, this change is very minor and affects less than 15 voters.

The easiest way of making sure voters arrive at the correct voting location is to double-check any mail received from the County Clerk’s office and Voter I.D. cards. Whitehurst mentions “Letters and new voter cards were sent to everyone… I would urge everyone to look at their recent mail and check.”

If voters have questions they are encouraged to call the County Clerk’s office at 417-859-8683(VOTE).