Toot Your Own Horn! 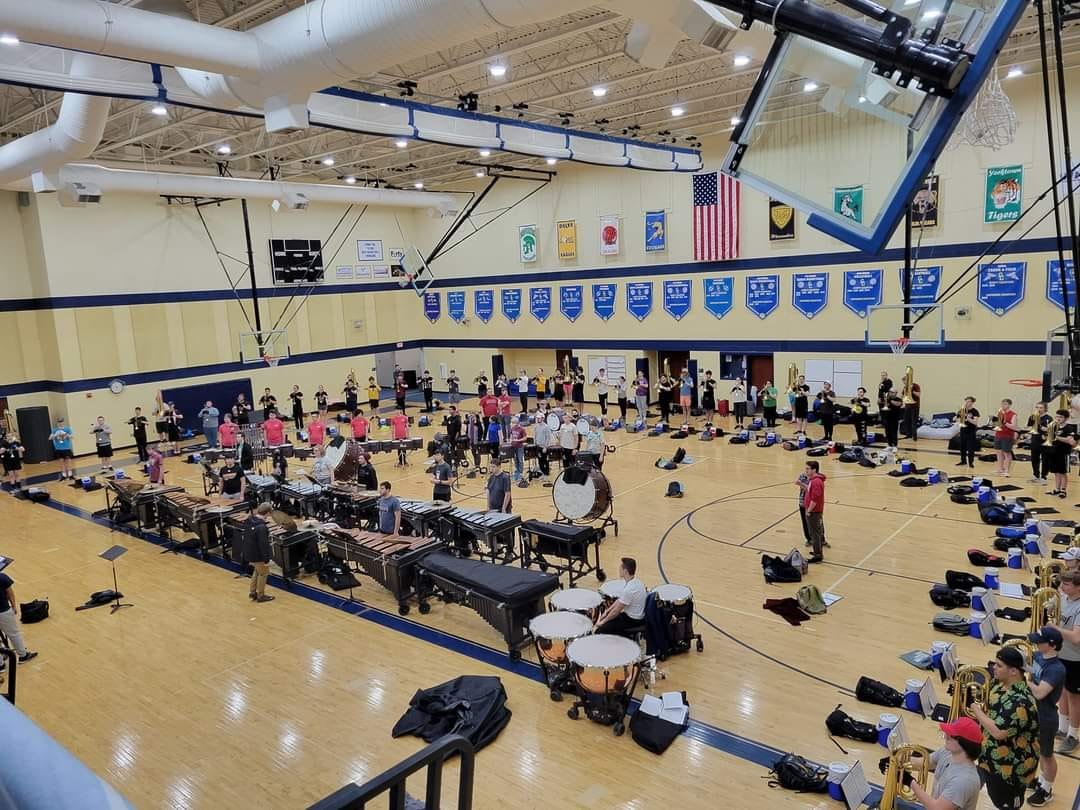 The Troopers Drum & Bugle Corps are seen practicing in one of the many schools during their 2022 Summer Tour. Not all schools, though, were welcoming. Avery recalls, “ One time we were almost kicked out of a housing site in New Jersey. The person in charge of securing the housing for us did not tell the school what was happening so we were on thin ice with them.”
Contributed Photos by Desiree Byars 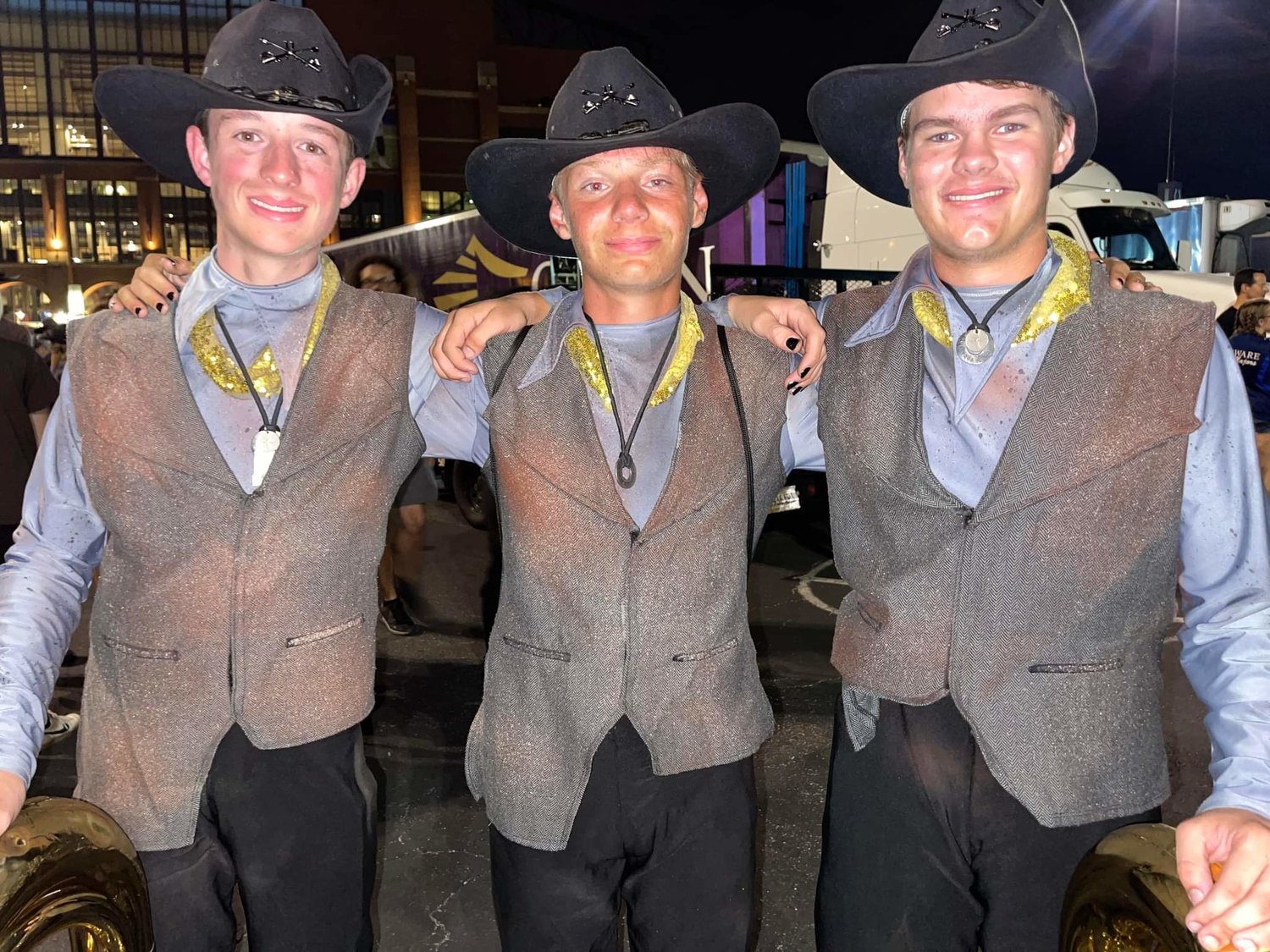 Avery Byers (center) stands with two of his fellow musical companions after a show. Avery will cherish the many memories and friends he made during the 2022 summer, “ …It is like family. You have lived with these people for two and a half months. You sweated and cried with them most of the time. You have literally done everything (together) for those two and a half months straight. It is kind of hard going back home and leaving that all behind.”
Contributed Photos by Desiree Byars 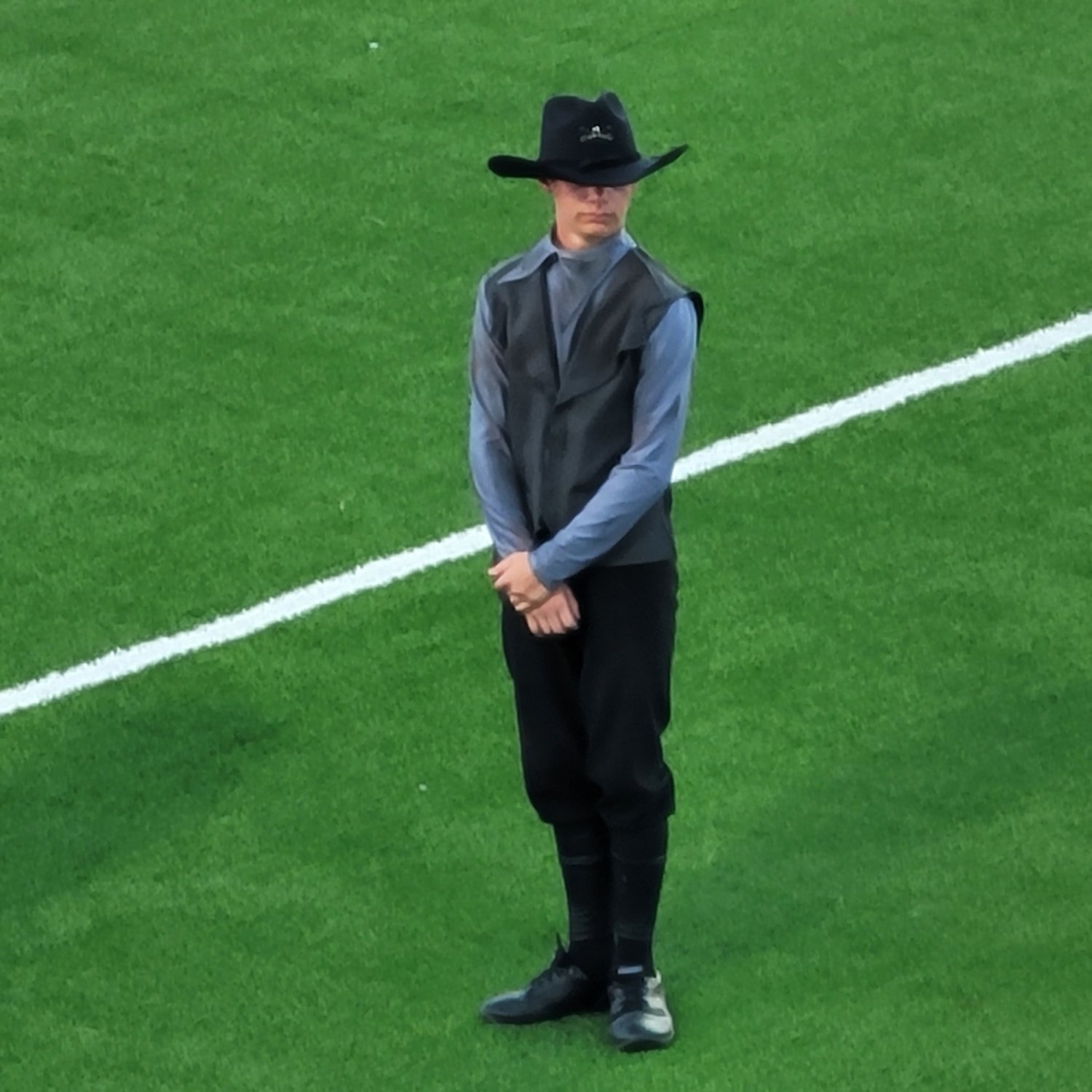 Avery is shown here performing at one of the countless shows with the Troopers Drum & Bugle Corps. He remembers all the hard work and effort he and the other Troopers, Drum & Bugle Corps, had done and hearing their name in the finals. “I just remember having the craziest rush ever. I turned to my friend and said, ‘We made it.’”
Contributed Photos by Desiree Byars
Previous Next
Posted Wednesday, September 7, 2022 12:00 am
By John “J.T.” Jones johnj@marshfieldmail.com

One note is all it takes for a song to start. For 16-year-old Avery Byars, it was a video.

“I was in seventh or eighth grade. I saw a video on YouTube of a head-cam from the Bluecoats (Drum and Bugle Crops) from 2016 and thought it was the coolest thing ever. I then thought, ‘I gotta do that one day.’”

The journey would not be easy, but it would be worthwhile. Daniel Wyman, the Band Director for the Marshfield Schools, notes, “Avery took the initiative to get in the process of marching and drum corps. It is something I encourage all our kids to do. It is a great experience for them, and they can bring back a lot of the knowledge they get back to our program over the summer.”

Avery had the drive, but there was just one obstacle: Byars was a bass clarinet player and the Corps only took brass instruments such as the trombone or trumpet. This would mean he would have to learn to play an entirely different instrument. Contrary to popular belief playing an instrument with your mouth requires more than just blowing hard into it.

Knowing all the hurdles Avery would face, his mother, Desiree Byars had some concerns.

“When he went from junior high to high school, he decided to play brass (trumpet) because he could not play a woodwind instrument in Drum Corps International. He said, ‘I think I’m going to play brass,’ and I thought, ‘there was no way the band directors were going to let us switch from woodwinds to brass’. But I told him to ask the band director”.

Luckily for Avery, Wyman supported the decision to switch.

“Avery showed an interest in brass in Jr. High, and we try to accommodate the kid as best as we can. It was something he was really passionate about.”

With his teacher’s approval, he just needed practice. Fortunately for Byars, his mom was able to help with this transition from a woodwind instrument to brass. “One of the ladies I work with is married to a retired band director named Mr. Sharron from Logan-Rogersville. He plays trumpet, so I took Avery to work with me a few times, and he would work with the band director."

Now that he had the instrument he needed, Avery could set his sights on his dream. In November of 2021, he tried out for the Colts Marching Corps. Initially, they accepted Byars but wanted Byars to complete a full year of marching class, so he would ultimately have to reject their offer. With some help from Mr. Wyman, Byars set his sights on another Corp that needed members, The Troopers Drum & Bugle Corps.

Wyman recalls how it happened, “Mary Duerkop, the Brass Caption Head for the Troopers, was judging trombones for the district band. We started talking, and she asked if we had any kids, we could send her way, and so I thought of Avery”. Unfortunately, there was little time to celebrate as practice began quickly.

For the next several months, it would be non-stop training and tours.

“It was intense and a bit of a blur. We would get on a bus and end up in a different state. Get up the next day, go to rehearsal, run our butts off for four hours, have lunch, and do it all over three to four times a day, do a show, then do it all over again,” Byars recalls.

These tours would span from Wyoming, Idaho, Colorado, Texas, New Jersey, Washington D.C., and Illinois. Desiree toured with the Corps as a volunteer and shared her experience.

“We were in a different state every day… I volunteered for part of the summer and thought I would see places that I had never seen before. Instead, what I got to see was a lot of the insides of other schools,” laughed Desiree.

The Troopers Drum & Bugle Corps started the 2022 season in 18th place. Through sweat, tears, and numerous music sheets, the team would rise through the ranks and enter the preliminary rounds in 14th place. However, halfway through the tour, the Corps would hit a snag: COVID-19. A devastating 49 members of the Corps would catch the virus and be unable to perform.

This meant some of the performances were lacking.

“In Arkansas, about halfway through the tour, we had a bunch of people get COVID. For two shows, we just stood and played the music, the directors realized we were not doing so well scoring, and they told us we are going to march in the next show.”

The Corps was understandably hesitant. Byars remembers thinking, “We do not have the props, we have less than 50 brass and ten flags”.  Still, the Corps kept marching on, which led them to enter the preliminaries in 14th place. Then came the finals. This was it; all the hard work would lead to this. Byars remembers precisely where he was when the announcement came through with the final results.

“It was the craziest thing. I was already in the stadium when they announced the scores… I was walking with a friend, heard the scores come over the intercoms, and said ‘Wait is that us?!’ I just remember having the craziest rush ever. I turned to my friend and said ‘We made it’,” recalled Byars. The combined hard work of every musician landed them 12th place. Something the Troopers Drum & Bugle Corps had not been able to achieve in 13 years.

“It is hard to explain that connection you have after a summer like that. It is like a family. You have lived with these people for two and a half months," Byars reflects. "It is hard going back home and leaving all that behind. Most of us stay in touch and for some members, decades after they are done”.

Byars indeed had fulfilled his dream of being in a marching corps. He plans to try out again this year but as to whether or not he gets in is anyone’s guess; one thing is for sure Avery Byars will continue marching on and forging his path.