Jays scrap with Tigers for the W 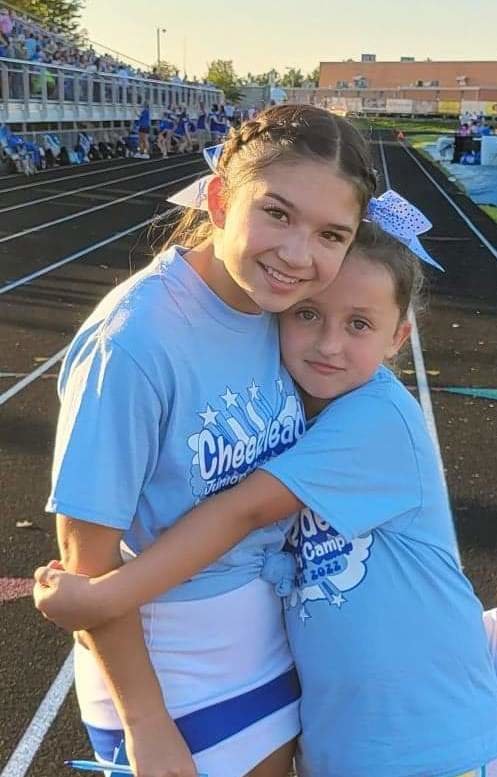 The celebration of Youth Night included players from the Marshfield Football League. These small Jays got to "flap their wings" alongside the Varsity Jays onto the field.
Contributed Photo by Sky Bruton 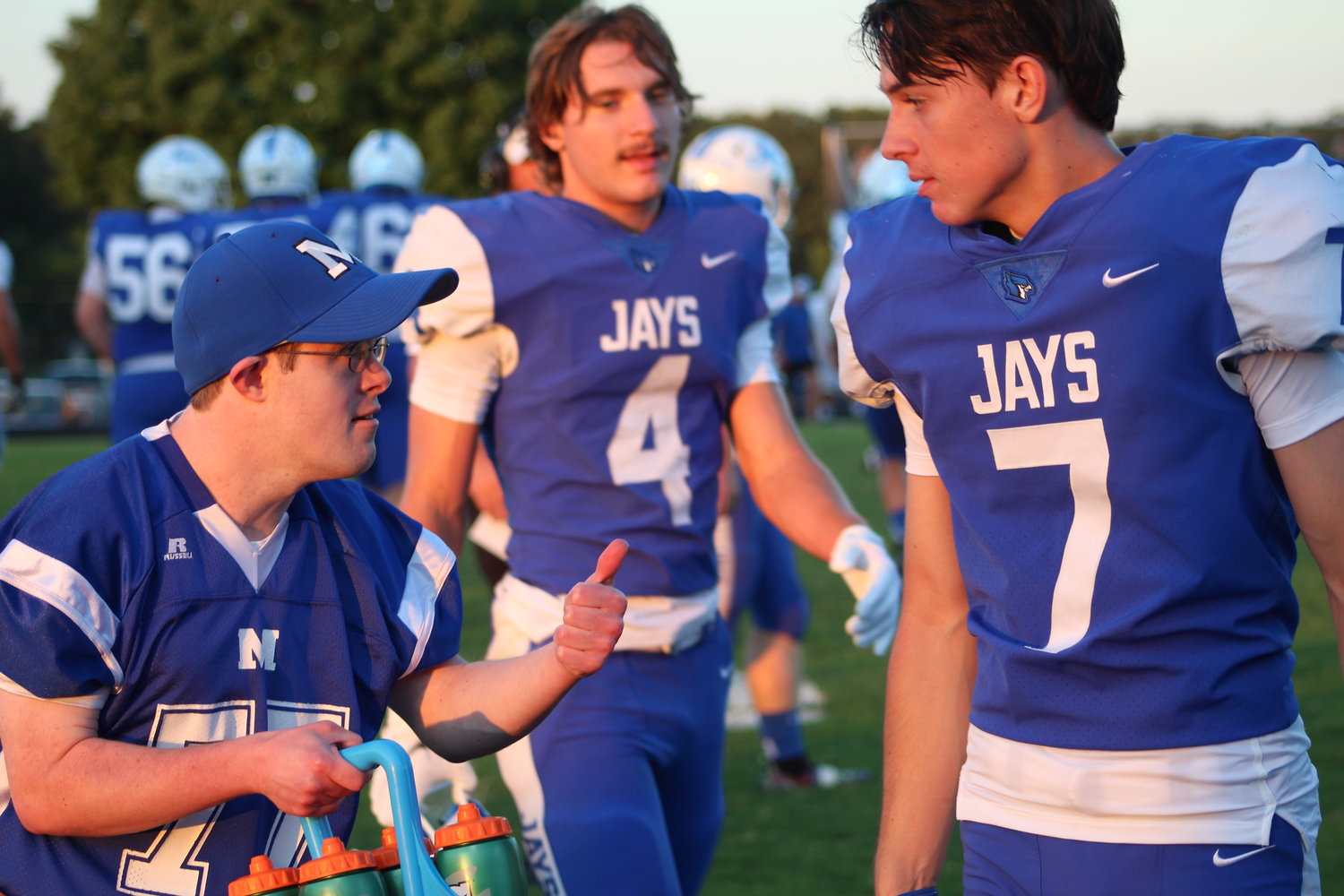 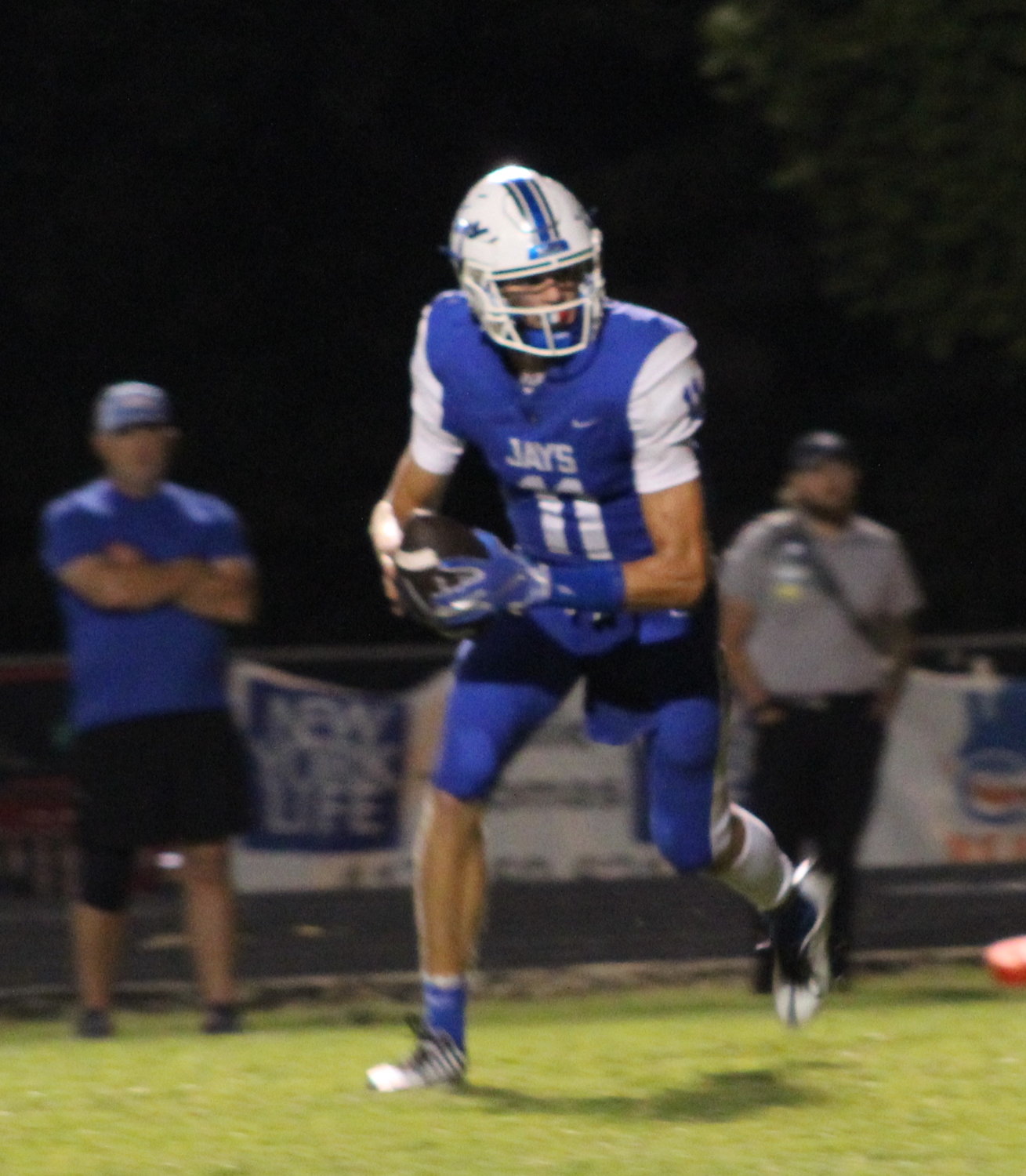 #11 Bryant Bull dashes for room to complete a five yard pass securing the Bluejays their third touchdown of the evening against the Tigers.
Mail Photo by John “J.T.” Jones 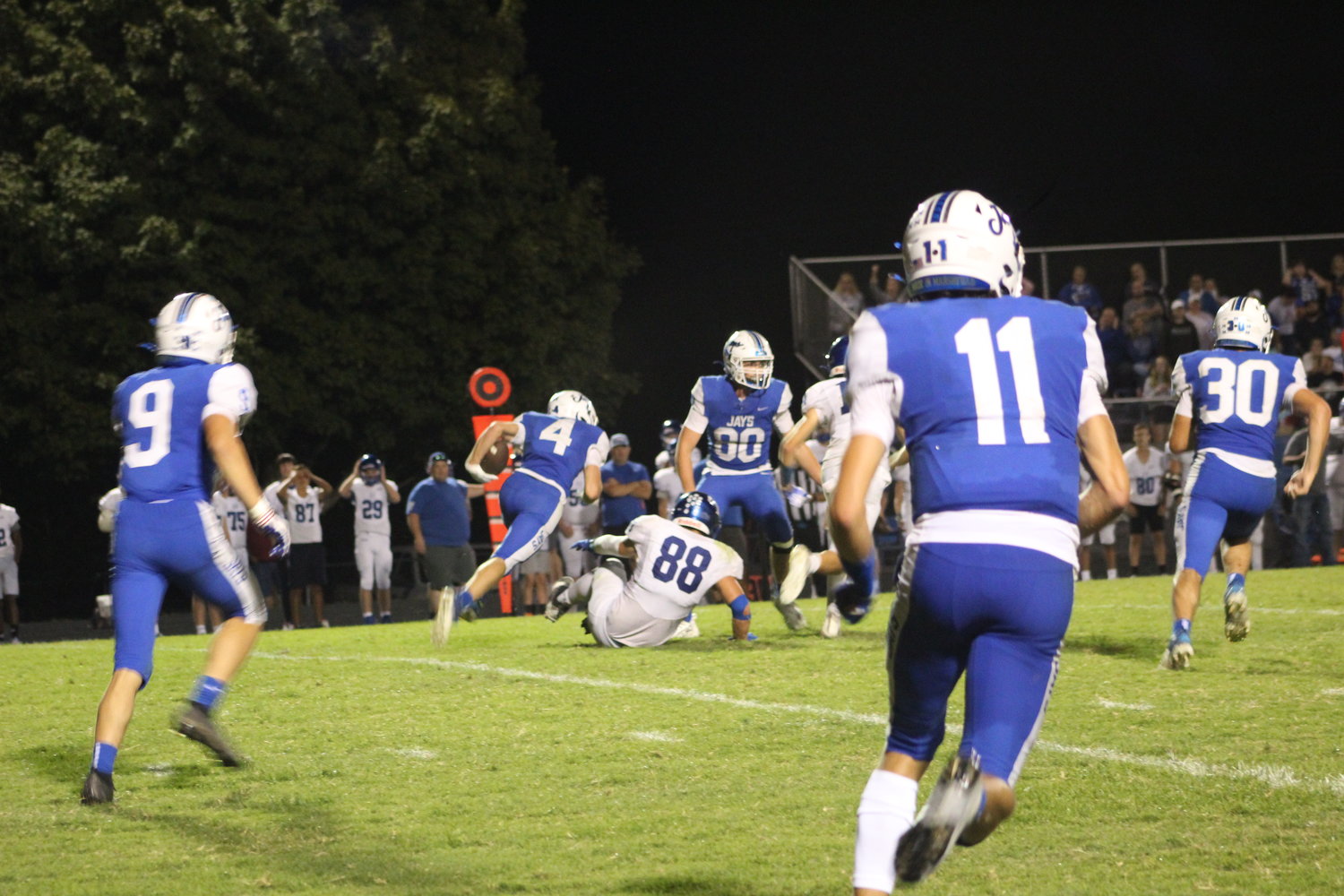 #4 Travis Greenfield seen with his fellow defense team as he starts a 44-yard run after intercepting a pass made by the Hollister Offense.
Mail Photo by John “J.T.” Jones 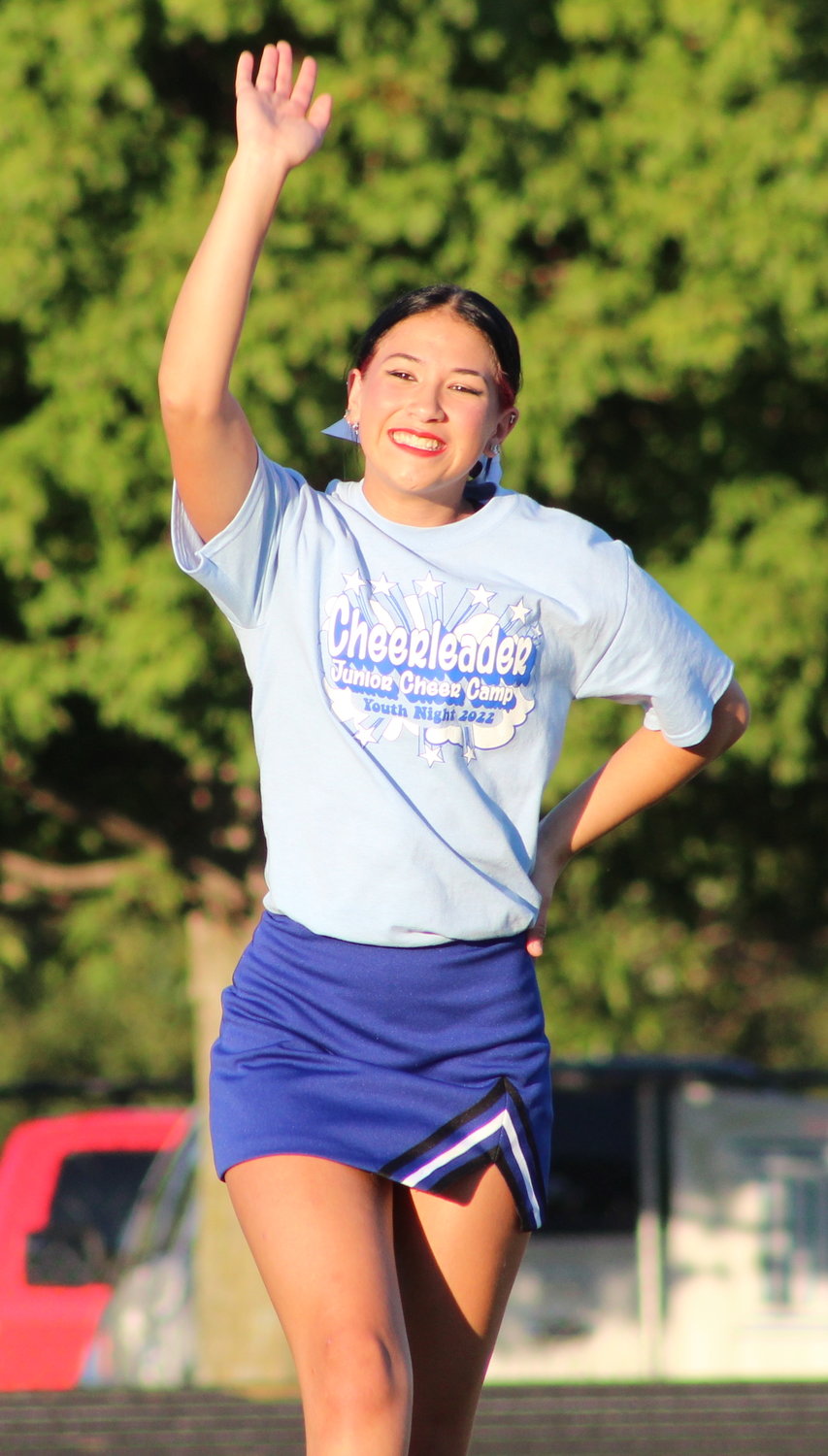 J.V. Cheerleader Journey Jones is all smiles as she participates in the pre-game performance with the rest of the cheerleaders and their junior counterparts.
Mail Photo by John “J.T.” Jones
Previous Next
Posted Wednesday, September 14, 2022 12:00 am
By John “J.T.” Jones johnj@marshfieldmail.com

Friday night, Sept 9, at R.A. Barr Stadium marked the third Varsity game for the Marshfield Bluejays, whose current record is 0-2. The Jays would face off against the Hollister Tigers. Would the Jays finally get a win, or would this be another loss? Only time would tell.

Fans received a pregame performance from the Marshfield Cheerleaders and their junior cheer mates; a cute and fun-filled performance. With the cheers finished, the National Anthem was played courtesy of the Marshfield H.S. band.

Following, the Bluejays would come flying in along with some “junior” gridiron birds from the youth football program.

The Jays and Tigers met after the junior celebrations finished. Then, with the flip of a coin, Hollister would start the game.

In the first quarter, the Jays got things moving, with #11 Bryant Bull making a 36-yard run to Hollister’s 13-yard line. A few plays later, #11 Bryant Bull would make a 16-yard pass to #86 Tyler Young, who completed the pass in the end-zone giving Marshfield the first touchdown of the game. The Jays would make the extra point, 7-0. The Jays' defense would struggle to hold back the Hollister Tigers which was evident at the end of the first quarter. The Tigers prowled just three yards from the goal line.

At the start of the second quarter, and in only three seconds, Hollister would score, but would miss the field goal, making the score 7-6. The Jays' defense appeared to warm up in the second quarter and would make things difficult for the Tigers. Hollister would be forced to punt in their 4th down, which landed at Hollister’s 40-yard line, ultimately setting Marshfield up for success. #11 Bryant Bull would make a handoff to #21 Dayvion Harris, who would complete a 14-yard run bringing the Jays closer to scoring. On the third down, #11 Bryant Bull made another impressive play, throwing the ball 25-yards down to #4 Travis Greenfield in the end-zone, adding another touchdown. The Jays would complete the field goal and wrap the first half of the game 14- 6.

The Marshfield Bluejays Marching Band would fill in the halftime with a spectacular show that was pleasing to both eyes and ears of the audience.

The third quarter would see a little action from the referees; numerous flags were thrown and many personal fouls, thus punishing both teams. However, between these flags, the Tigers were able to make a 14-yard pass followed by a successful two-point conversion tying the Tigers and Jays in the end 14-14.

The fourth quarter kicked off with both teams looking to go big or go home. It was apparent the Jays wanted to “go big”. #11 Bryant Bull would connect a five-yard pass to #86 Tyler Young, who would then run the ball, giving the Jays their third touchdown of the evening. The Jays would complete the field goal, bringing the game to 21-14. However, the Tigers would retaliate, and in a few plays, the Tigers' offense broke past the Jays' defense, scoring another touchdown.

The tigers would attempt a two-point conversion to put them in the lead. However, their plan would be in vain as #10 Andrew Beckner and #34 Tate Boles bring down Hollister's quarterback in his tracks. Not settling, the Jays would get the ball, and #11 Bryant Bull again, with another impressive pass, would throw 14-yards to #14 Joe Harles, who would make a 29-yard run to the end zone and the Jays would complete the extra point. Hollister attempted to score another touchdown, but #4 Travis Greenfield would intercept the pass and run it for 44 yards. The Jays would run the remaining seconds out of the game and thus get their first win for the 2022 season. The final score would be Marshfield Bluejays 28, Hollister Tigers 20.

The Bluejays will play home this Friday, Sept 16, as they take on the Monett Cubs at 7 p.m.