The legend of Buff Lamb 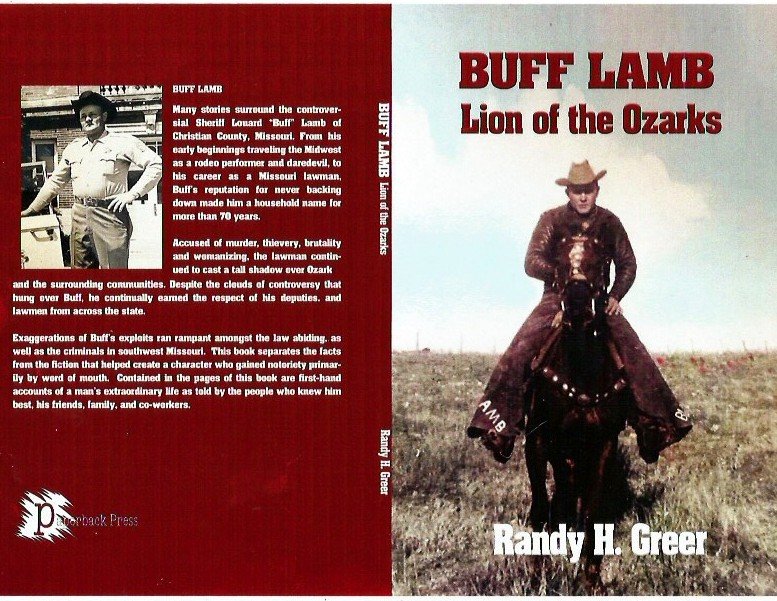 It’s not uncommon for kids to grow up hearing stories. Folk stories and the sharing of them is one of the ways history and culture is passed down from generation to generation. “I grew up on stories of Buff Lamb from Christian County,” shared Randy Greer, author of Buff Lamb Lion of the Ozarks. “The stories were that he was this mean sheriff that wielded a five cell flashlight and beat up people.”

Greer grew up on a farm north of Marshfield and graduated from MHS in 1978. From there he went into the Army where he served four years. Upon exiting the military, Greer was a police officer and deputy in Webster County before going to work at the old Missouri State penitentiary on death row. Following his time there he went to work at the Fordland Correctional Center, then on to the Fed Med in Springfield for 22 years before retiring. For the last ten years he has worked as a Missouri State private investigator.

Buff Lamb Lion of the Ozark is Greer’s third book. His first book was Echo’s of Mercy, a brief history on the Federal Medical Center and his second book is called King’s Corners: The True Story of a Small Town Cop in Rural Missouri in which he reflects on his time as a small town cop in Seymour. “I wanted to write what it was like to be 23 years old and be a small town cop…before cell phones and our nearest jail was twenty miles away,” shared Greer.

Coming from a history in the correctional field it made sense that Greer’s next book would be around the infamous Buff Lamb that he grew up hearing stories about. “There is lots of stories about him; there’s a story he held somebody by the ankles off the overpass there in Ozark, there’s a story that he turned back the Hell’s Angels out on the highway,” shared Greer. “I toyed around for years about writing a book…I decided I would dismiss all the myths and folklore and stories and I would try to build Sheriff Buff Lamb from the ground up. I would open up his life and tell what was really real about him.”

Greer began writing the story of Buff Lamb in 2015 and he interviewed anywhere from 70 to 100 people, many of them are named in the book. “If you told me a story I would check it out. One story was Buff hated long hair on kids and so he would make the boys cut their hair. I thought well that’s a good story and I like that and it’d be good in a movie but is it real? …Finally I found a guy that said ‘yeah, he took my brother and I was with him, and he took him to the barber shop and said ‘son you need to get your hair cut’,” explained Greer as he spoke about the time he spent tracking down truth in the stories he was told while writing his book.

“Buff was so prolific that people wanted to say, “the legendary Buff pulled me over and beat me up with a flashlight,” laughed Greer. If you are interested in reading the book yourself and learning about the legendary Buff Lamb you can find Buff Lamb Lion of the Ozarks on Amazon.

“I can only write what I know. Local history is what I like,” answered Greer when asked if he was working on anything new. When asked if he had any advice for aspiring writers, Greer laughed, “I think everyone has a story inside of them. Write what you know, write what you like. ….Don’t write books for money because unless you’re John Grisham or Steven King, you’re not going to sell a billion copies.”