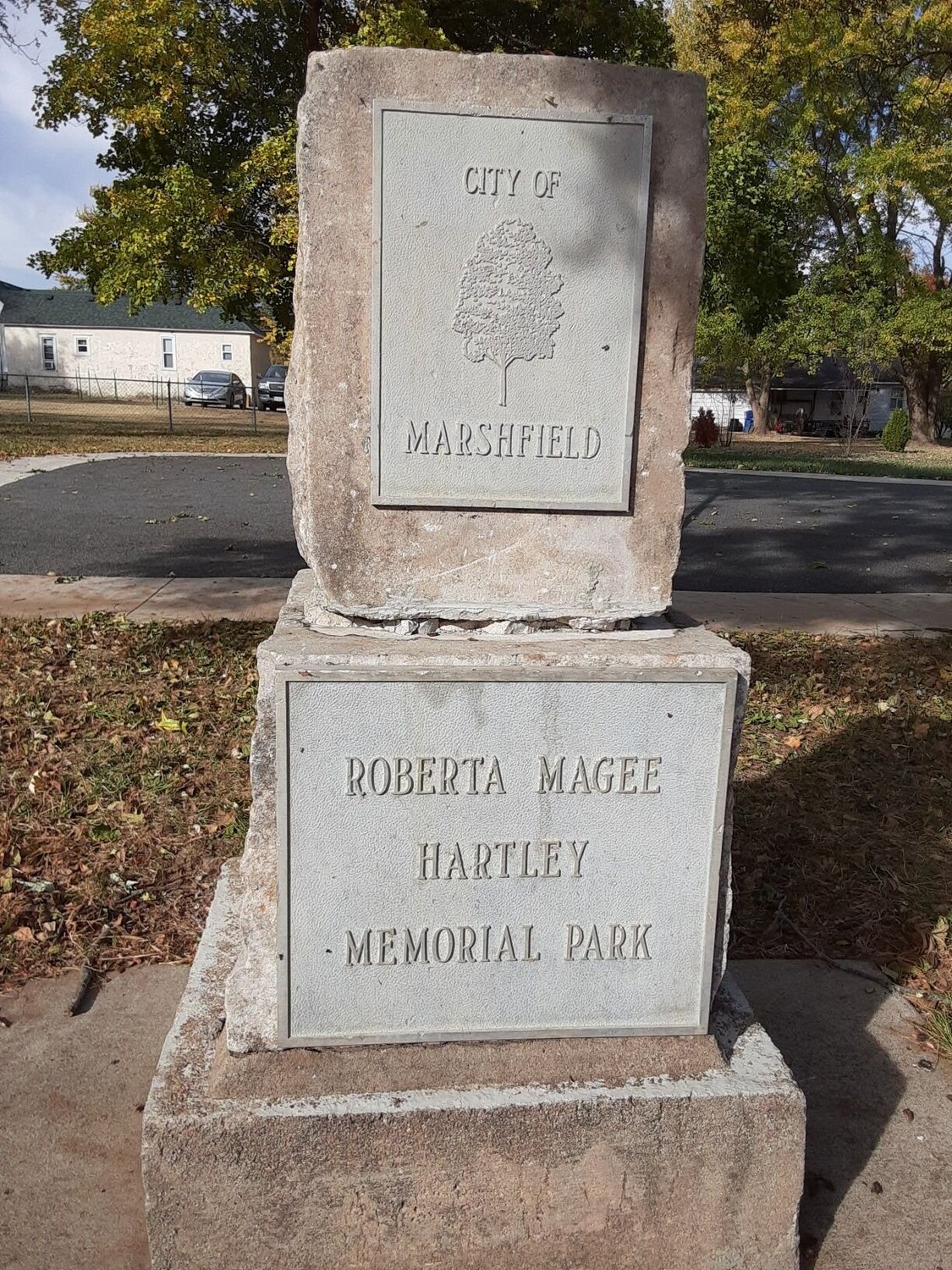 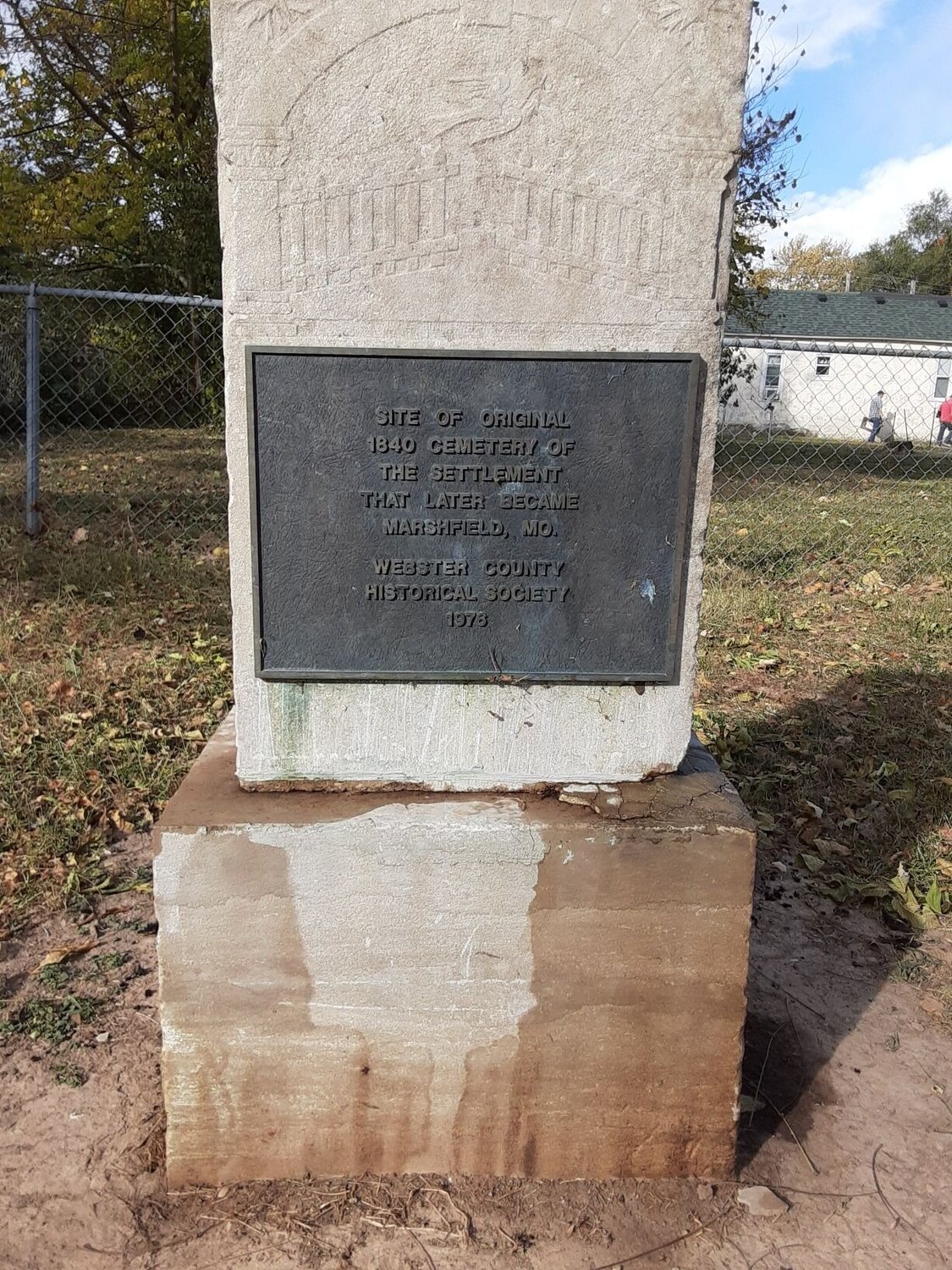 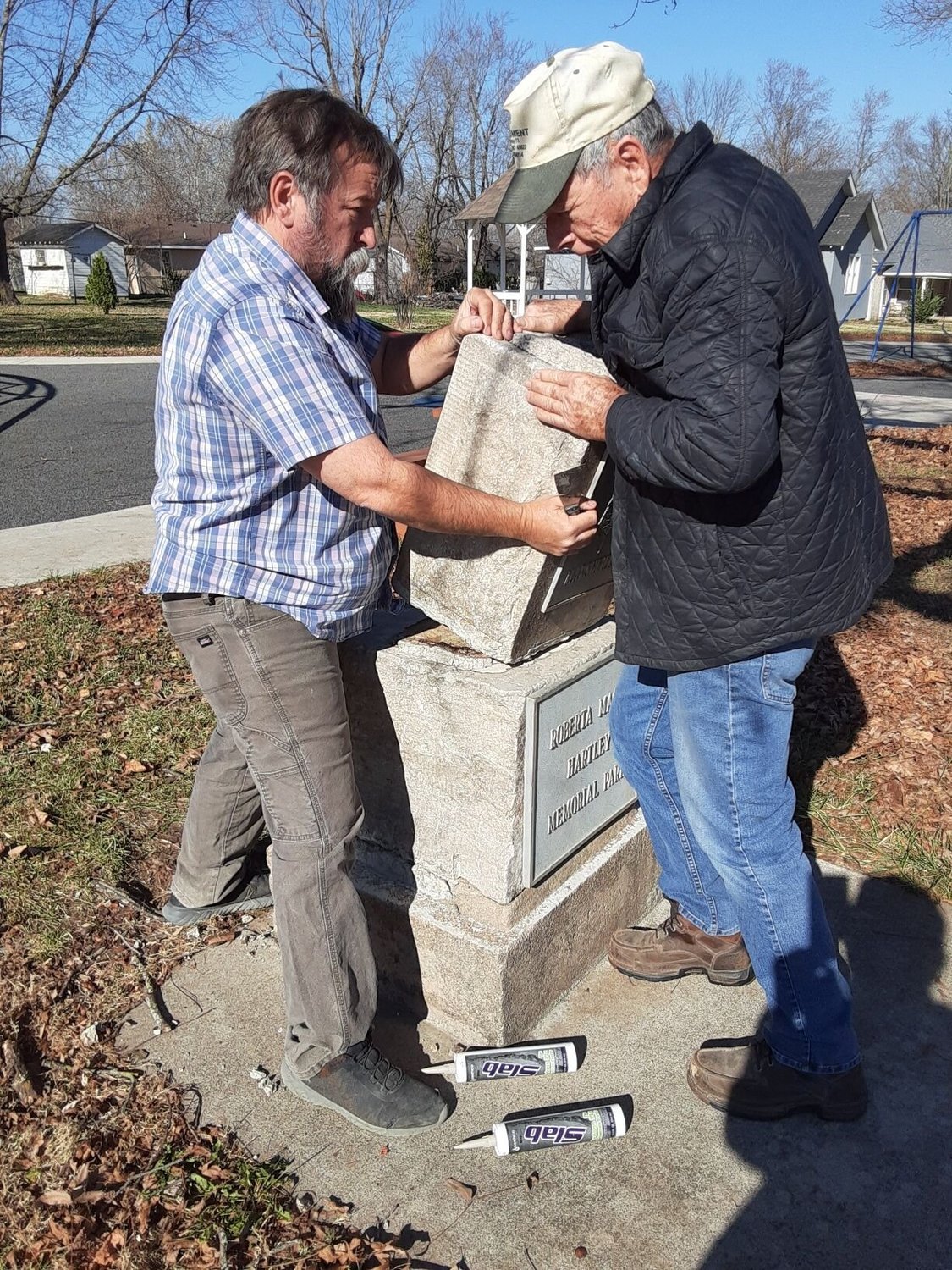 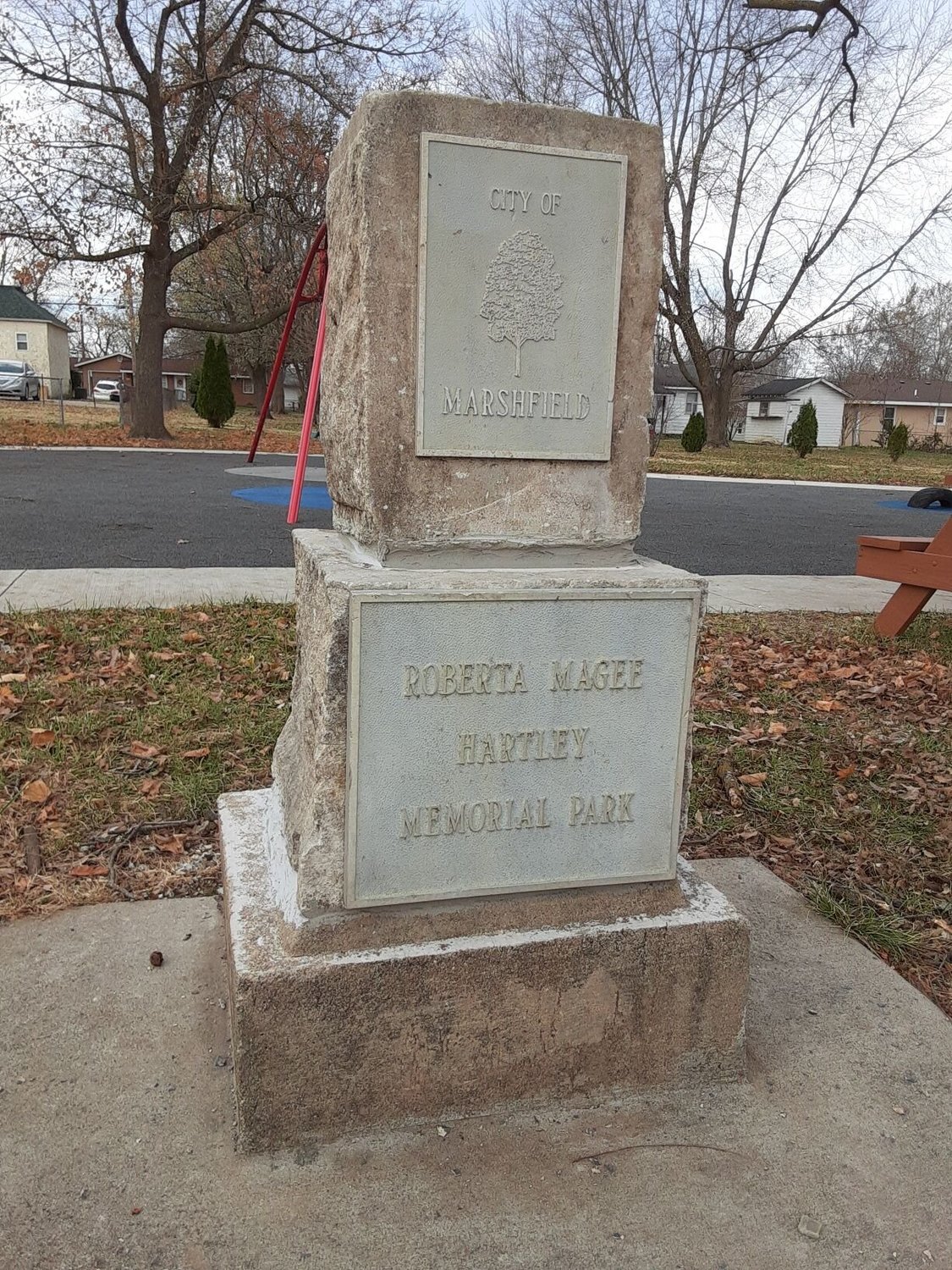 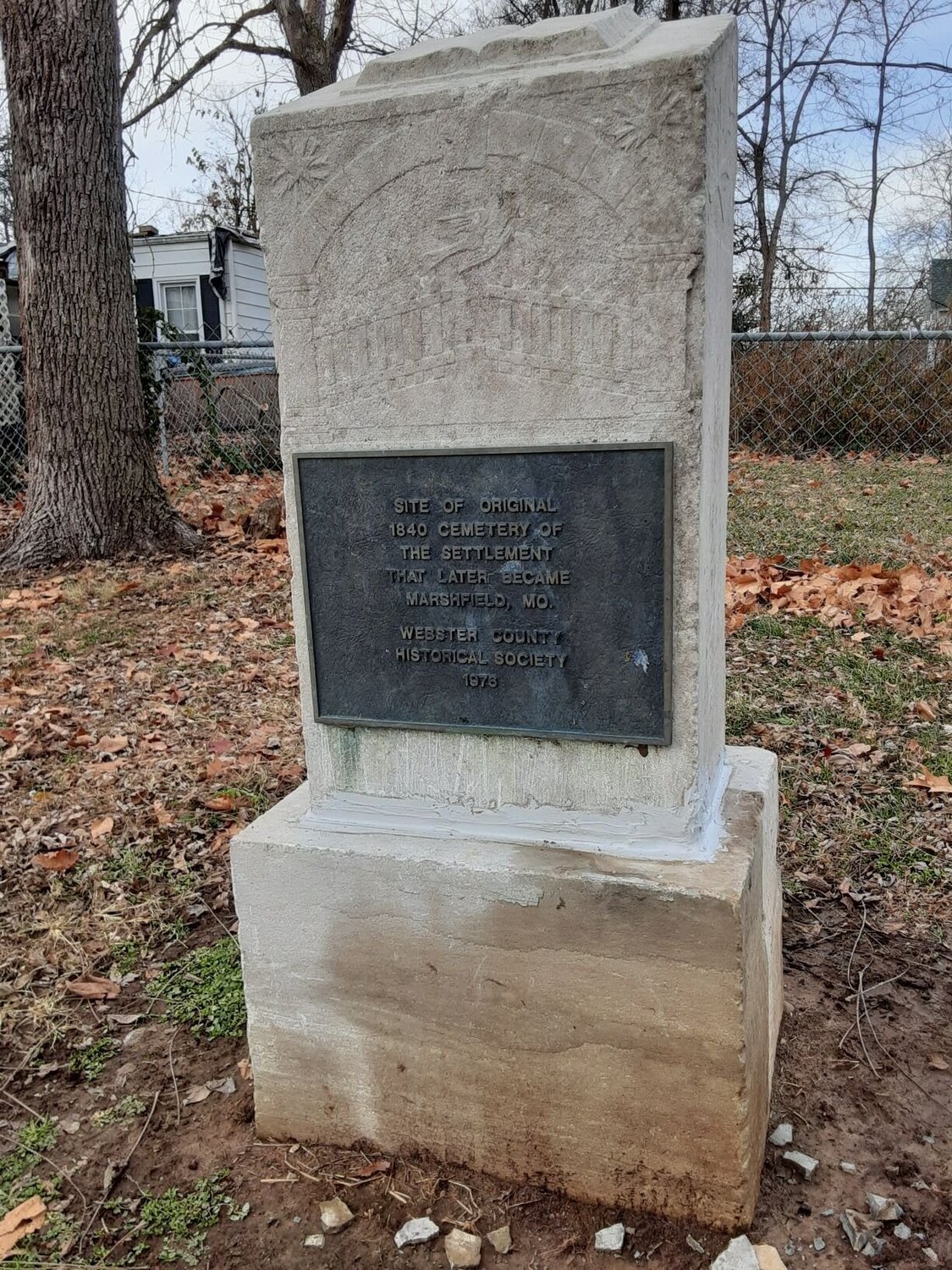 Who is Roberta Magee Hartley for whom the Hartley Park on N. Clay Street is named and how/why was the property donated to the city for a park? This was a question posed by Webster County Historical Society members and city officials during a recent meeting to discuss the aging monuments in the park. A visit to the park to inspect the monuments in Hartley Park and the one on the adjacent lot designated as the first burial site in Marshfield revealed both monuments were badly in need of resealing.

In 1976, the Historical Society had placed the bronze marker on the monument marking the lot to the south as the "Site of original 1840 cemetery of the settlement that later became Marshfield, Mo". The Historical Society accepted responsibility, in cooperation with the city, for seeing that both monuments were resealed, a task recently completed by Holt Monument employees.

Historical records reveal this burial lot was from the T. T. Watters estate and was used as a cemetery until 1842 and that a Mr. Flanagan is buried there. The Flanagan family is purported to be the first settlers to what would become Marshfield, that "a log house was built on a hill south of a spring near a sand quarry."

It is unknown to what extent the site was used as a burial ground before the Burford Cemetery came into use in the early 1840's, later becoming known as the current Marshfield Cemetery. Some of the first burials in the "Burford Cemetery" were the Burfords and Drydens who in 1856 donated 30 acres each for the establishment of Marshfield as the county seat.

But who is Roberta Magee Hartley? Roberta Magee was the daughter of James William and Julia Thomas Magee. She was born in Harrison County, Mo. February 26, 1876. On March 17, 1904 in Webster County, she married William Douglas Hartley (1867-1942) and they had one son, David Douglas Hartley, born August 25, 1905. (William Douglas was the grandson of centenarian Jesse Hartley who lived to be 105.)

Her Funeral Notice reads, "The funeral cortege will leave the family residence on Clay Street tomorrow morning at 9 o'clock". Services were at Timber Ridge at 12 o'clock. She was eulogized by Frank P. Reno as follows, "She was loved by everybody who knew her... The congregation was large and sympathetic. The church was full of people."

After Roberta's passing, W. D. and his three-year-old son, David, moved to Springfield to live with W. D.'s sister, Minnie and Dave Johnson who had no children. David Douglas Hartley was educated and went on to become a chemist with Sun Oil Company. It is known that David often corresponded with extended family in Marshfield and his letters were shared with others.

One can only imagine the devastation felt by a three year old child in losing his mother at such a tender age. But the memory of her and life in Marshfield evidently was kept alive for him by his father and aunt and uncle and in 1975 David transferred ownership of the family residence on N. Clay Street to the City of Marshfield for the purpose of developing a children's playground in remembrance of his mother, and thus today children enjoy the Roberta Magee Hartley Memorial Park. David Douglas Hartley died June 21, 2001 at the age of 95 and is buried at Rose Hill Memorial Park, Tulsa, Okla. He and his wife Helen had no children.

And now as one drives on N. Clay Street, it is hoped the Roberta Magee Hartley Memorial Park will have a little added meaning to passersby and those that use the park, perhaps sharing the love and memories felt by a three year old boy for his mother.