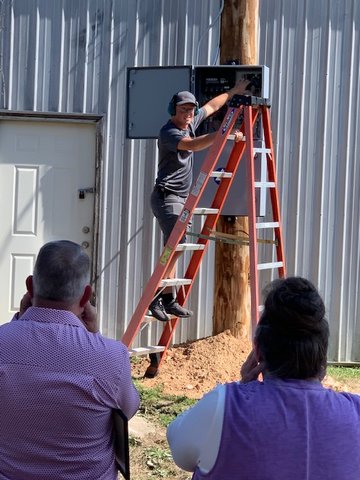 Tornado warnings are pretty standard weather alerts living in Webster County. When the tornado siren goes off, you know it’s time to take cover. But what happens if you’re town doesn’t have a siren?

“When I went to visit the Village of Diggins, I spoke with Penny. She said ‘look, we need a siren. We have nothing: we don’t have a siren, we don’t have a storm shelter, we have nothing.’ So I said let me work on it,” shared Douglas. “So February til now I’ve been making calls, trying to look for grants.”

Storm sirens can run anywhere from $30,000 per siren depending on the model. “We (Webster County) we can’t afford that. Diggins can’t afford that…Being the fiscal conservative that I am, I want to find the least expensive way to find something and still get the work done,” shared Douglas. “A kid, I say a kid because he is only 21…, he called me back…when I was talking to him he gave me a quote around $20,000 and I said ‘man we just don’t have it’.”

After talking with Cruz Newberry, owner of Table Rock Alerting Systems, Newberry explained to Douglas that he was currently taking down an old siren in another town. “He said, let me take a look at that and see if we can retro fit it, fix it, and see what we can do. If it works I’ll just donate it to you,” explained Douglas.

The controller box, the part that receives the signal from 911 to activate, was refurbished and the total cost for the new siren went from $30,000 to only $7,800.

“I approached the commissioners and they were absolutely on board. They didn’t like it that there was a population of our county that wasn’t covered,” Douglas expressed.

Things moved fast once the plan was in place and the Village of Diggins celebrated the installation of their new Tornado Siren on Monday, August 8, 2022.

“It’s not about me, this whole thing…it’s not about me. We are a rural county and this kid, he’s just like ‘here’s $10,000’,” reflected Douglas of the generous gift Newberry gave to the county by donating the siren.

“I gotta give props to Webster Electric Co-op. Above and beyond…Tom Houston didn’t even blink when I said ‘hey we could use a little help’…They brought the pole, the crew…they drilled the hole and wired it up. That saved us about $1,000,” shared Douglas. “It absolutely was a community coming together to make this happen.”

During the pole raising on Monday, the Village of Diggins held a celebration and tested the siren. “This older guy came out and said ‘you call that loud? The trains louder!’. Just as he said that a train comes through and blares the horn. I went man you’re right the trains louder,” laughed Douglas.