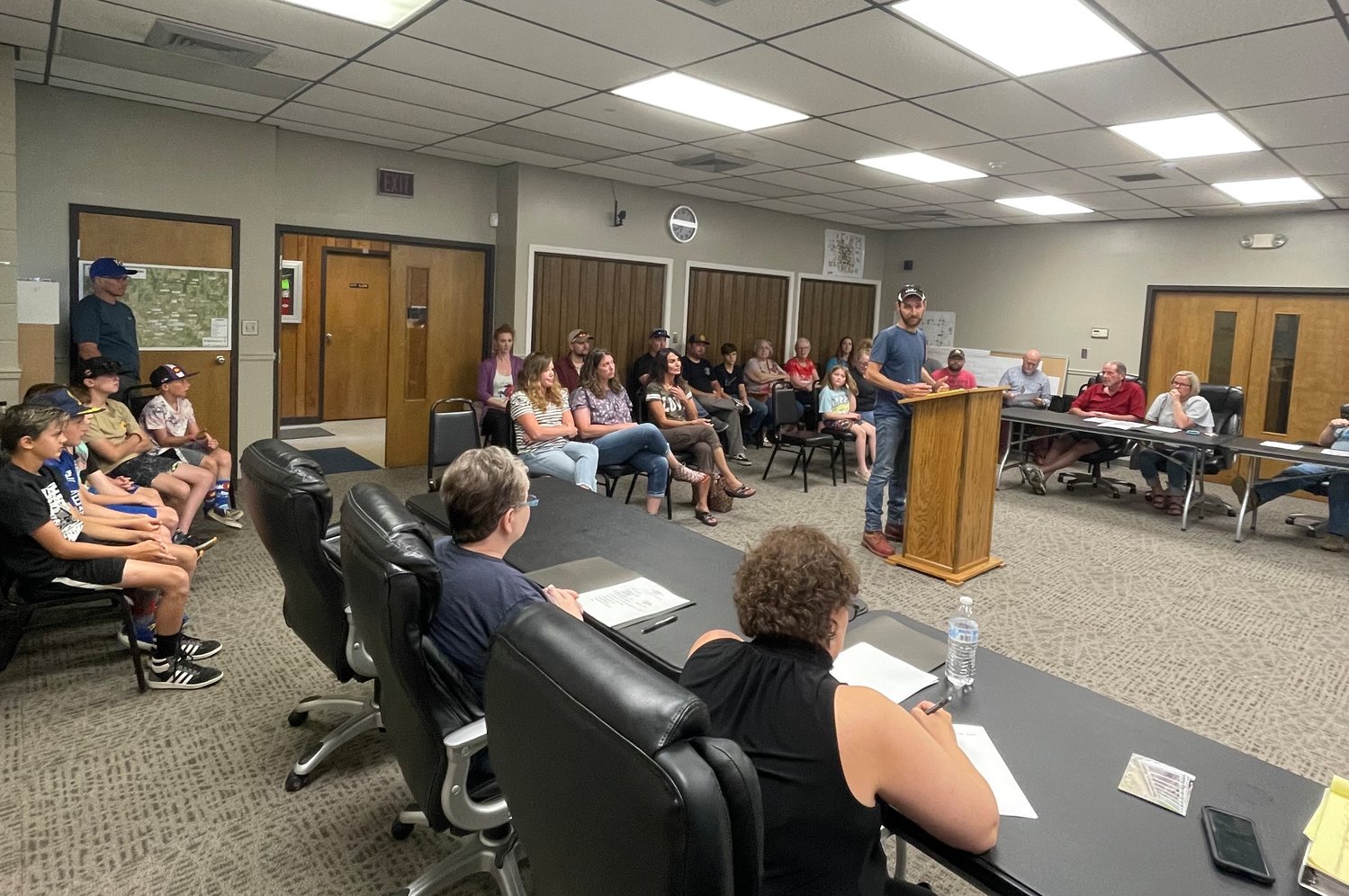 Kris Hurt, secretary of Marshfield Action Sports Syndicate stands at the podium presenting the goals and vision for MASS. Several members of the community showed up to support the organization. “You’re going to find an advocate in us.”
Amber Brand
Posted Wednesday, June 15, 2022 12:00 am
Amber Brand amberb@marshfieldmail.com

Everyone in Marshfield has heard about the city’s “master plan” over the last few years. It’s no secret that the city leaders have been hard at work to focus on creating a community that is well rounded. This past Tuesday, June 7, the Park and Rec Board was approached by the Marshfield Action Sports Syndicate (MASS) with a goal to partner with the city to build a modern concrete skatepark.

The Marshfield Action Sports Syndicate: is a grass roots organization with one goal in mind; “to create a top-quality concrete skate park in Marshfield, MO in order to provide a safe, family oriented and all-inclusive free-to-use sports facility for our community,” according to their Facebook page.

“We were formed because there is a distinct lack of action sports in the Marshfield park system. We often times find kids and adults out in the streets riding their bikes, riding their skateboards and scooters,” Kris Hurt, secretary of the MASS explained to the Marshfield Park and Recreation board at the meeting on June 7.

The newly formed organization MASS was created only two months ago according to Hurt.

“We partnered with John Visser at Hero Ride Shop (President of MASS). I got acquainted with him over the past year as a skater and BMXer. Conversation after conversation: ‘Marshfield needs a place to ride’, ‘we don’t have any place local to ride’, ‘we can’t skate on the square, we are stuck in the streets, we just need a place to ride’,” reflected Hurt. “The shop developed a place for like minded people to come together finally.”

The meeting took place at City Hall, where over twenty people showed up in support of the organization. Second on the itinerary, Hurt waisted no time when it was his turn to go before the park board.

“…We would like to form a partnership with the city…You’re going to find an advocate with us for a diverse park system.” shared Hurt to the park board. “What we would really like to be focusing on over the next two to five years is developing a plan to construct a community concrete skate park and asphalt pump track. These skateparks are good safe places for community members to come together and ride.”

With loads of information Hurt spent his time on the floor presenting the short term and long term goals to the park board; with a lengthy conversation around the suggestion from MASS on an interim skatepark to bridge the gap while funds are raised and the park is built.

“We would propose, since the tennis courts over here (gestures toward Rotary park) are not in great shape and are not being utilized very much, be divided in half. The two eastern courts be spruced up a little bit, seal the concrete, maybe paint-they could be utilized for tennis. The two western courts could be developed into a temporary or interim skatepark while the modern concrete skatepark is developed,” presented Hurt.

Among the chatter and feedback from the park board members several suggested that MASS meet with the Foundation for an Active Community in Marshfield (FACM). “We have worked with groups (in the past), we would not have a pool if we didn’t have the FACM group that came on board and helped parks to get that started,” explained Ann Rost, Vice-President.

Overall the outlook seemed to be positive with a majority of the board anxious to see the MASS and FACM meeting come to fruition.

The Marshfield Action Sports Syndicate is comprised of a four person board: John Visser, President, Luker Anderson, VP, Kris Hurt, Secretary and Davilin Giles, board member. At the June 7 meeting the MASS had a couple of goals in mind: “We were hoping to introduce ourselves to the community: who we are and what we want to do and to get an advisory committee and I think we accomplished that,” reflected Hurt in an interview after the meeting.