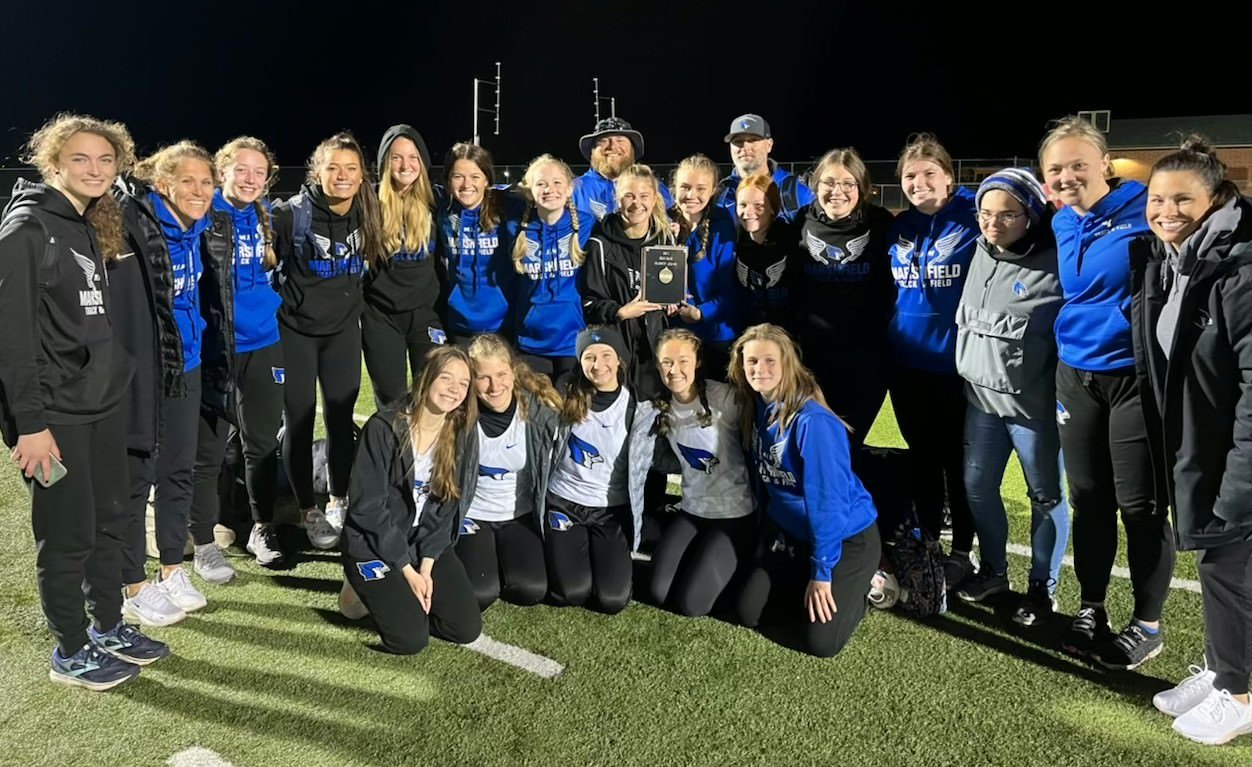 The 2021-’22 Lady Jays Track and Field Athletes win the Big 8 Conference Championship for the second year in a row. 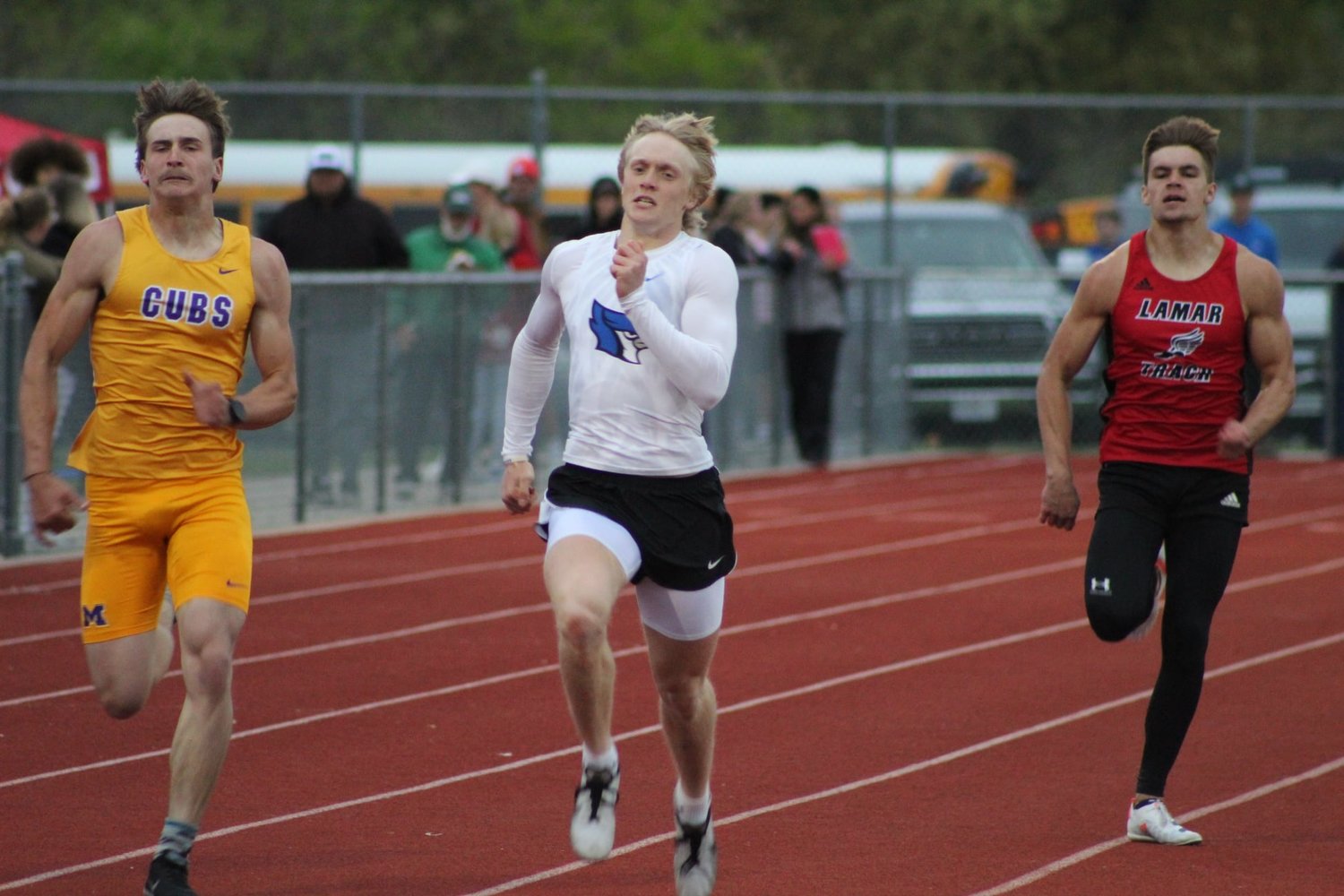 Senior Cooper Kimrey continues to “raise the bar”. Kimrey holds the current record for the BlueJays 200M with a time of 22.76. 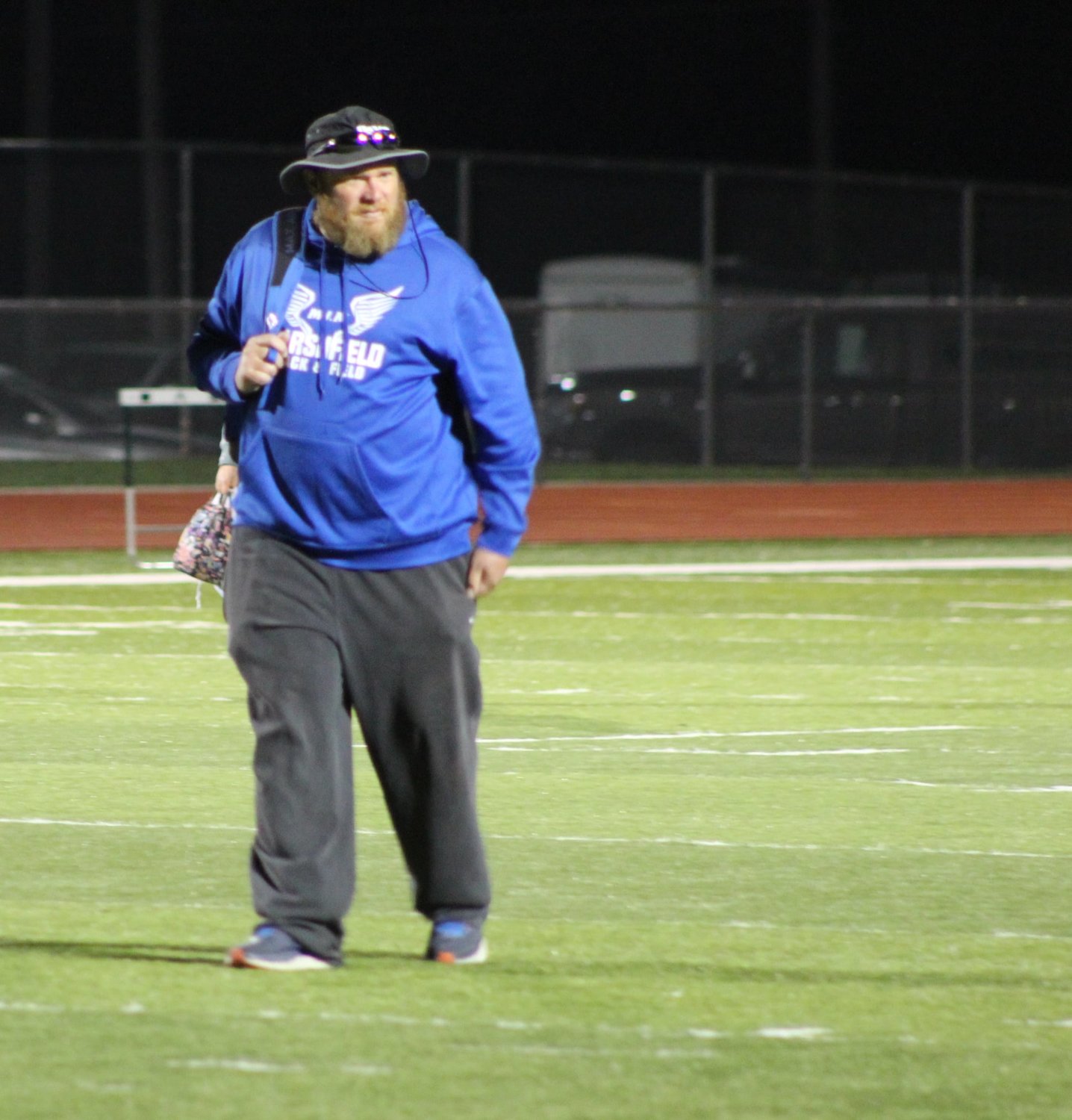 Coach Roy Kaderly named the 2021-22 High School Girl’s Coach of the Year.
Previous Next
Posted Wednesday, May 11, 2022 11:10 am
By Alyssa Andrews alyssaa@marshfieldmail.com

Van Halen’s “Jump” echoed throughout Mt. Vernon stadium during the final moments of the Big 8 Conference Championship on May 3. The ’80’s classic also made for a memorable soundtrack to Marshfield Senior Chelsey Brown's final attempts in the girl’s pole vault; setting a personal best and conference record at the same time. Her audience; Marshfield High School (MHS) Track and Field athletes, officials and a handful of Blue Jay parents.

“There were multiple jumps that night that were her best jumps,” explained Head Track and Field Coach Roy Kaderly. “That was really exciting to have the stadium to ourselves, with the music playing and watching her break the record.”

Brown finished the meet with a height of 10’6.25’’ and a back flip to celebrate. Brown would be one of many athletes throughout the evening to find success at the Big 8.

The Blue Jays boys team pulled out all the stops, either by PR’s or pummeling the competition. Senior Peyton McBride not only broke his school record for the Triple Jump, but the Big 8’s with a whopping leap of 14.66M. McBride is currently ranked No. 2 in Triple Jump in the state of Missouri. Senior Cooper Kimrey bested his own school record again in the 200M with a time of 22.76. Kimrey is now ranked No. 11 in Class 4.

The chances of securing first was in sight for the Jays, however, nail biting finishes and injuries landed them in second. The boys team represented in 18 of the 19 events earning a total of 108 points, trailing behind East Newton’s 120.

The Lady Jays were crowned the Big 8 champions for a second year in a row, showing up, and off, in all 19 events. The powerhouse crew scored 119.50 points, besting Nevada’s 102.

The Lady Jays finished the night off with Brown’s superb performance, but had numerous showings throughout the day.

“We have talked a lot about raising the standard. That’s our motto, a team united,” reflected Kaderly. “It's just been fun to see everybody working together and they understand the importance of team points. Raising the standard is also earning conference championships now. It is what is expected now. Not just by myself or the other coaches, but by the athletes. They expect this.”

In fact, Coach Kaderly is also raising the standard, earning the title of Big 8 Girls Track and Field Coach of the Year. Still, Kadely graciously gave praise to his athletes and fellow coaches, stating “all the credit goes to them.”

The Blue Jays will fly to Carl Junction on May 14 to compete in Districts against Carl Junction, Bolivar, Hillcrest, Logan-Rogersville, McDonald County, Monett, Webb City and Willard.

“I think we have a good shot of getting out of districts and sectional in Class 4,” shared Kaderly. “We are going to have to continue to compete at a high level.”