A group of active and retired service members gather as Marshfield pays tribute to those who answer the call to serve.
Mail Photo by John “J.T.” Jones 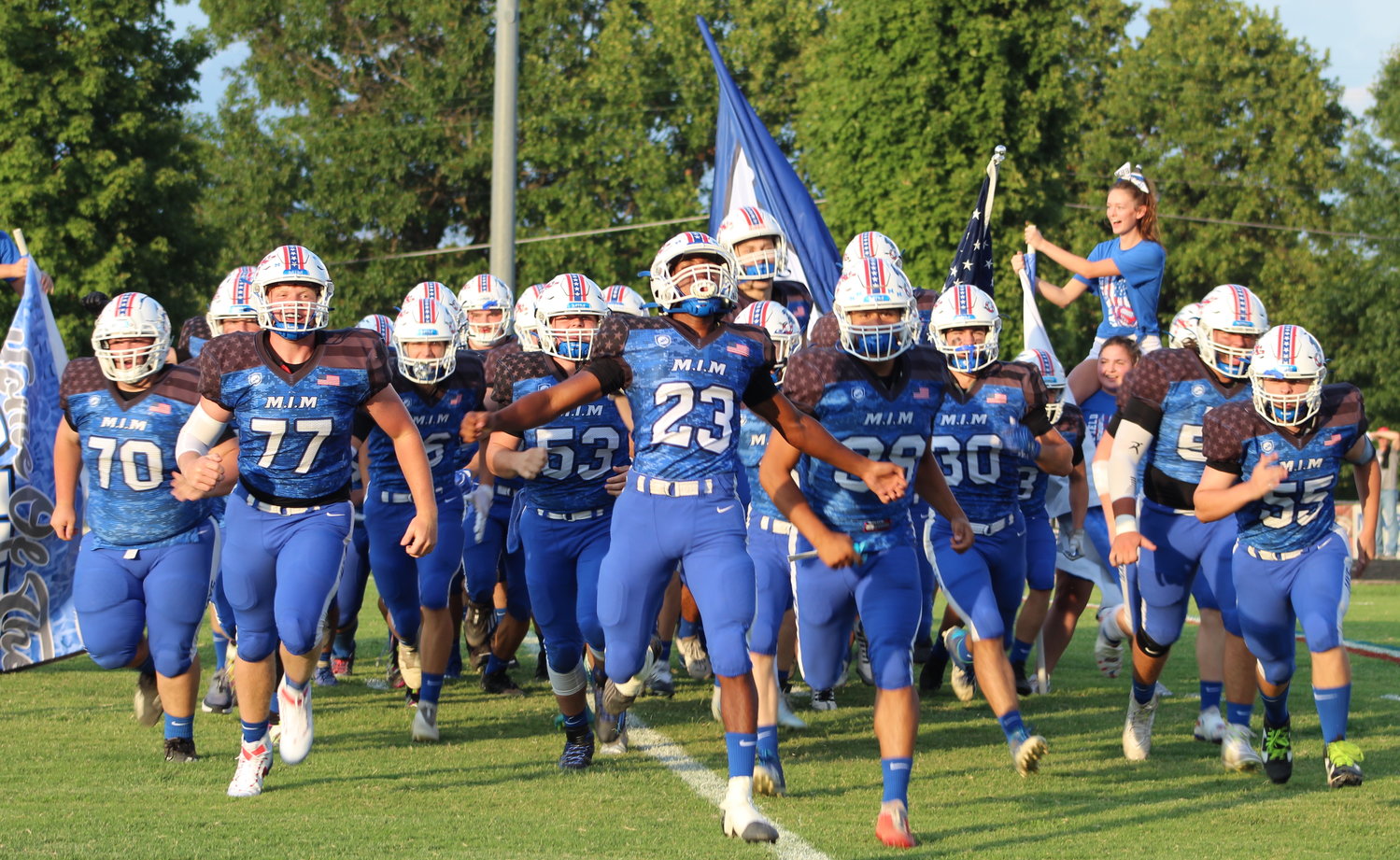 #23 Joseph Martin and the rest of the Bluejay Varsity team fly out of the Marshfield banner, full of pride and excitement as they prepare for their first official game of the season.
Mail Photo by John “J.T.” Jones 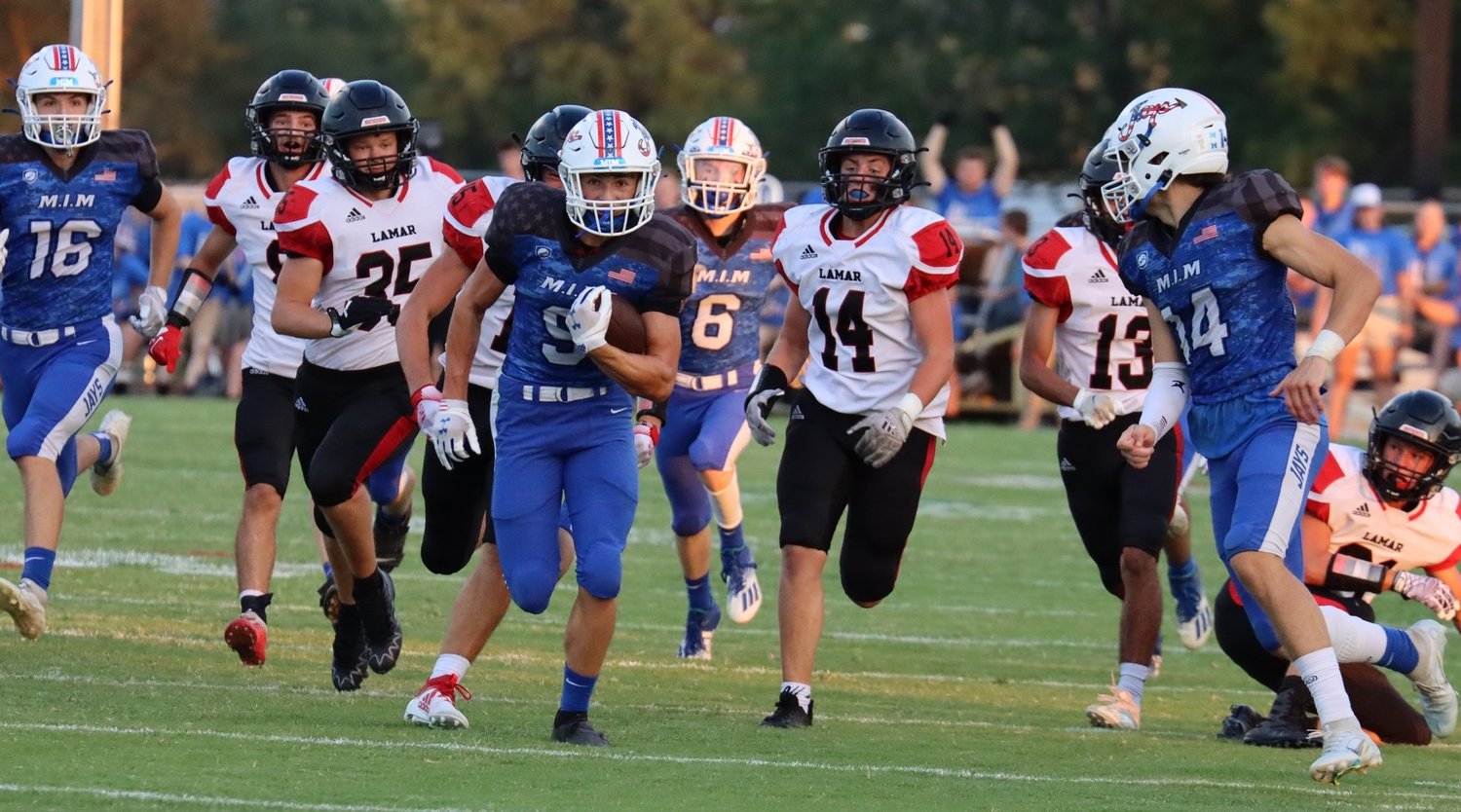 #9 Marcus Blackstock runs down the field a total of 75 yards during the first quarter of the game before getting stopped by Lamar Tigers Defense.
Contributed Photo by Breanne Rost 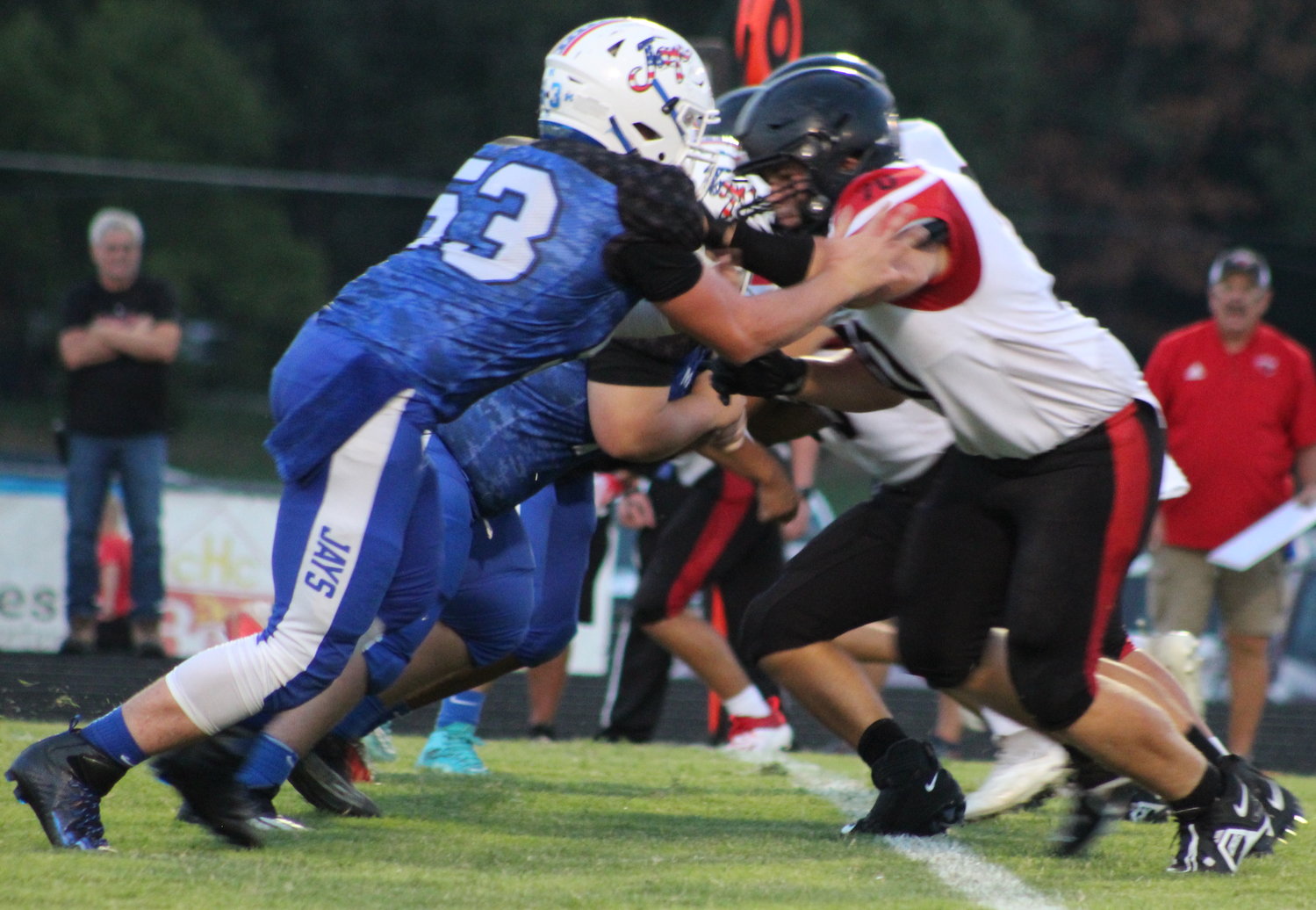 #53 Jagger Robinson squares off against Lamars Offense as he and the rest of the Jays' defense try to stop the Tigers from gaining years.
Mail Photo by John “J.T.” Jones
Previous Next
Posted Wednesday, August 31, 2022 12:00 am
By John “J.T.” Jones johnj@marshfieldmail.com

Aug 26 was the start of a familiar and welcoming sight of Friday Night Lights as the Marshfield high-school Varsity Football Team started their season against the Lamar Tigers.

Friday Night kicked off with a dance routine thanks to the True North Movement Dance Team. The celebration continued with a salute to the armed forces and first responders. Crowds cheered as the men and women who answered the call to serve made their way across the track. The very talented high-school choir then performed Marshfield’s school song, which was met with a cheer.

Speaking of cheering, the Marshfield Blue Jay cheerleaders also gave a performance honoring the troops. The high school band then performed the National Anthem. Both teams stormed the field, where a flip of the coin determined who would start the game, Lamar’s Tigers.

The first quarter started with some big moves from the tigers. They made a 34-yard run scoring the first touchdown of the game. The Tigers did not stop there and made two more consecutive touchdowns and completed all three field goals. Marshfield’s #9 Marcus Blackstock ran a kick-off to Lamar’s 6-yard line, a total of 75 yards. But the tiger’s defense ensured the blue jays would fly no further to the goal. The first quarter ended with a score of 0-21, with Lamar Tigers in the lead.

In the second quarter, the Jays would try to make their move, but they would not be successful with several fumbles, incomplete passes, and flags. The Tigers then, in a handful of plays, gain 80 yards to score a touchdown. It did not stop there as Lamar’s offense would score two more touchdowns, ending the second quarter and first half of the game with a score of 0-41, Lamar ensuring their lead.

During halftime, the Marshfield Bluejay Band gave us a fun break from the game with an entertaining performance featuring inclines, flags, and good music. Afterward, halftime wrapped up, and it was on to the last half of the game.

In quarter three, the Jays would make a play with #23 Joseph Martin, fighting to the 43-yard line. The Jays attempted a field goal, but that was unsuccessful. The Tigers’ offense would then score another touchdown and successful field goal ending the third quarter with a score of 0-48, Lamar Tigers winning.

The fourth quarter saw some last pushes, with Larmar starting off with a complete pass for 35 yards. However, having had enough, the Jays’ defense would not allow the Tigers the satisfaction of another point. The Bluejay’s #10 Andrew Beckner lead the way and pushed the Tigers back. The Jays’ offense would see the teamwork of #23 Joseph Martin and #11 Bryant Bull trying to get gain yards for the Jays and possibly a touchdown. Again, the tiger’s defense would prevent that from happening, and the fourth quarter ended.

The first game of the Marshfield’s Bluejays varsity season ended with a loss against the Lamar Tigers with a final score of 0-48. The Varsity Bluejay fly to McDonald County on September 2 to face the Mustangs at 7:00 pm.