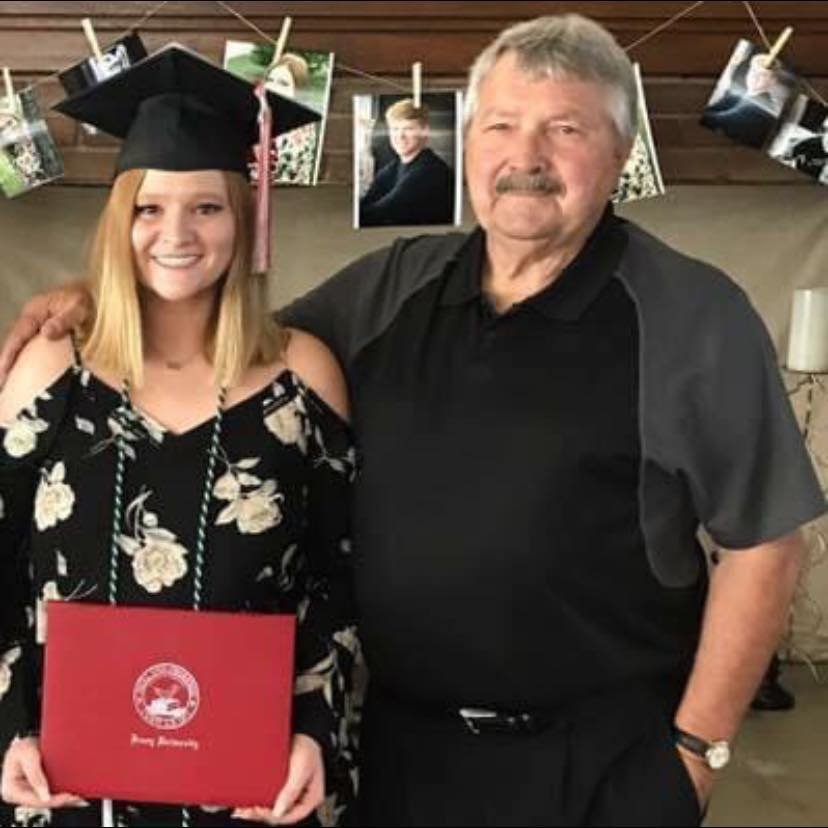 Mail editor Shelby Atkison pictured next to her grandfather, Bob Atkison at her college graduation.
Posted Tuesday, October 19, 2021 12:00 am
By Shelby Atkison shelbya@marshfieldmail.com

Just like any profession, there are days where I find myself questioning how on earth I found myself on this career path.

I wanted to be a doctor. *Cue laughs*

Actually, I didn’t take a single communication course until I was starting my senior year at Drury University. However, soon after I graduated I found myself day-dreaming of working alongside Marshfield grad Don Louzader, pumping out news at KTTS.

Luckily, I got my chance to work on Mr. Louzader’s team prior to COVID’s massive shutdown. For me, the opportunity to learn from someone like Don was truly a dream. I can’t think of a stronger news voice in the region…

The skills I picked up and sharpened while writing multiple news stories a day, reporting go-patrol traffic, storm-chasing are all tools that I use daily at the Marshfield Mail.

Reflecting, it was quite chaotic. It became easy to feel down on myself while working part-time at a zoo to supplement my income at the radio station.

I was immediately drawn to the Editor position posted by the newspaper and couldn’t keep myself from applying – after all, isn’t it the dream to do what you love in the hometown you know and love?

I chalk it all up to God for pulling me in the direction of a news career, and I thank him daily for the trials I’ve faced since joining the mail 14 months ago. Every corner I’ve turned, I’ve learned a lesson that I’ll carry with me throughout the rest of my career, wherever it leads me.

However, I know of a few angels who probably played a part in it. This past week I was brought on to the Board of Directors for the Ozark Press Association, an honor I never would have imagined for myself.

While attending the annual conference at Bennet Spring, I was able to meet and network with so many news professionals from around the region. What I wasn’t expecting was for these folks to bring up my great-grandfather, Leon Atkison or my Papa Bob.

My Papa Leon is known for many things – his music, service as a County Commissioner, being a school teacher, sawmill, dump truck and concrete truck operator. He actually helped build Table Rock Dam.

However, it wasn’t this that he was mentioned for. My Papa Leon was the editor of the White River Leader and the Taney County Republican before co-founding the Branson Beacon newspaper, of which he was the managing editor. How could I not expect these seasoned newspaper owners and editors to recognize my last name?

My grandfather, Leon's son, Bob Atkison once petitioned the FCC to bring a radio station to Marshfield, where he then worked and called Blue Jay sports action with his buddy, Mike Ahrens. (Guess that’s where my dad gets it!)

The gentleman that mentioned my Papa Bob asked me, “Did Bob get you into the radio business?” Not exactly, but I heed my Papa’s advice every day that I produce the news.

He was still here when I started writing for the paper and I'm so happy for the simple, yet effective advice that rings in my mind daily. He said, "Just be sure to cover who, what, when, where, why and how and nobody can ever complain."

Every interview I conduct, I'm always repeating these words in my mind.

While everything seems to be coming full-circle, I can’t help but feel overwhelming gratitude for my family and the path they seemingly paved for me before I even realized it.

I have never enjoyed a day of “work” more than I did at Thursday’s conference, reminiscing on the accomplishments of family that has gone before me. Today, Oct. 19, marks the one year anniversary of my Papa Bob leaving this earth and boy do I miss him everyday.

I only hope I’m making him proud.