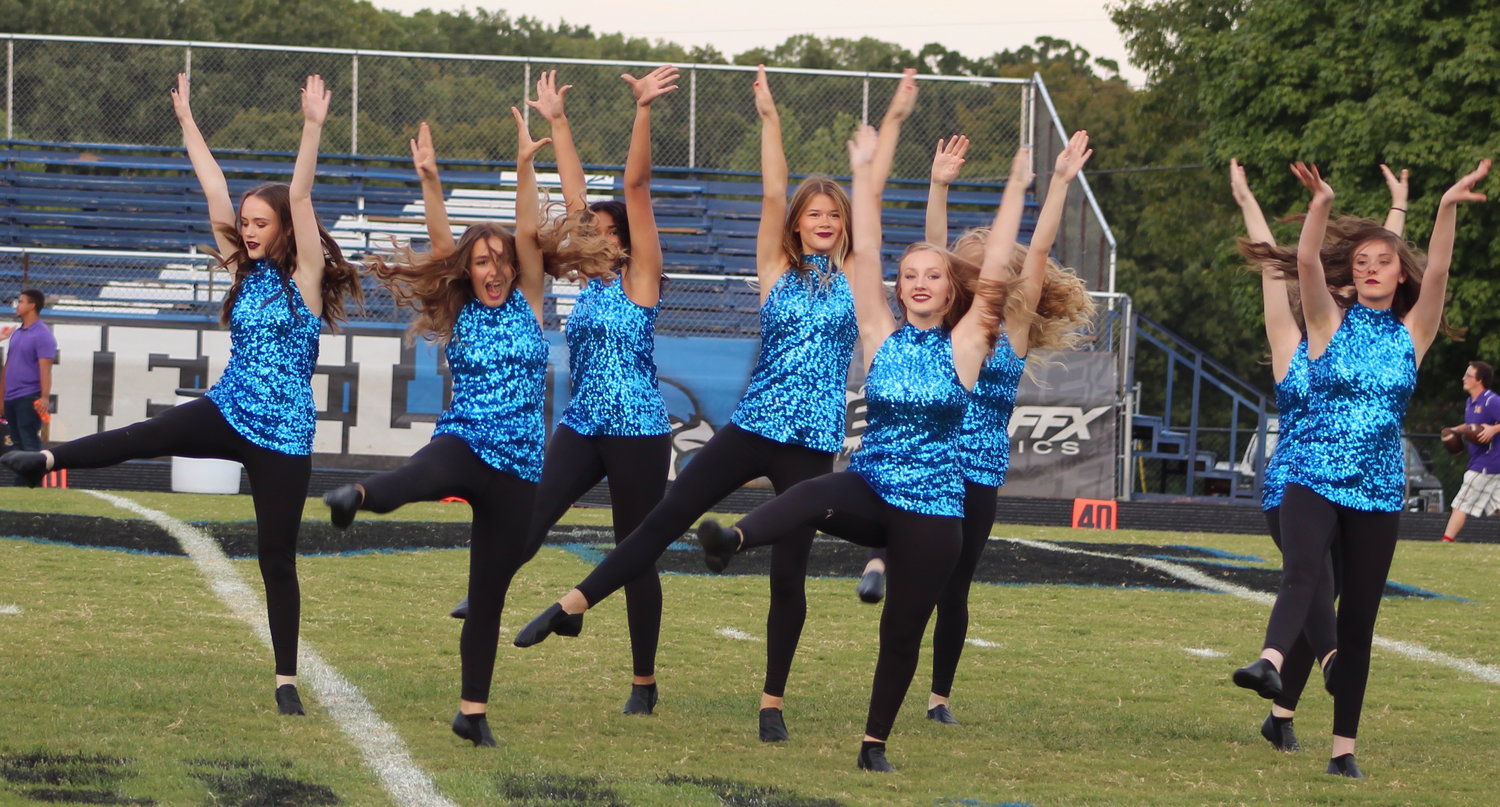 All smiles and sparkles are the Lady Jaywalkers giving a dazzling pre-game performance.
Mail Photo by John “J.T.” Jones. 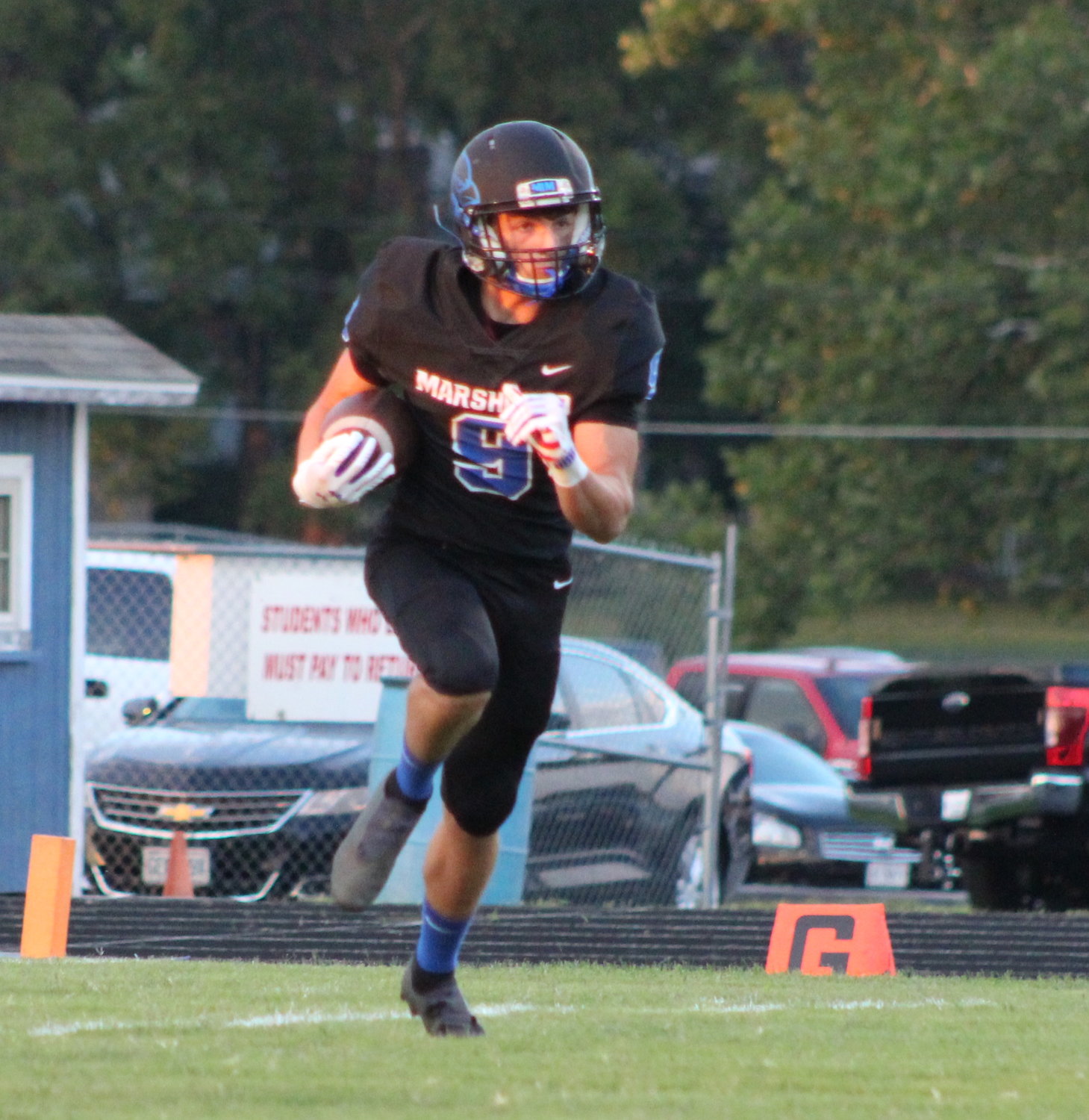 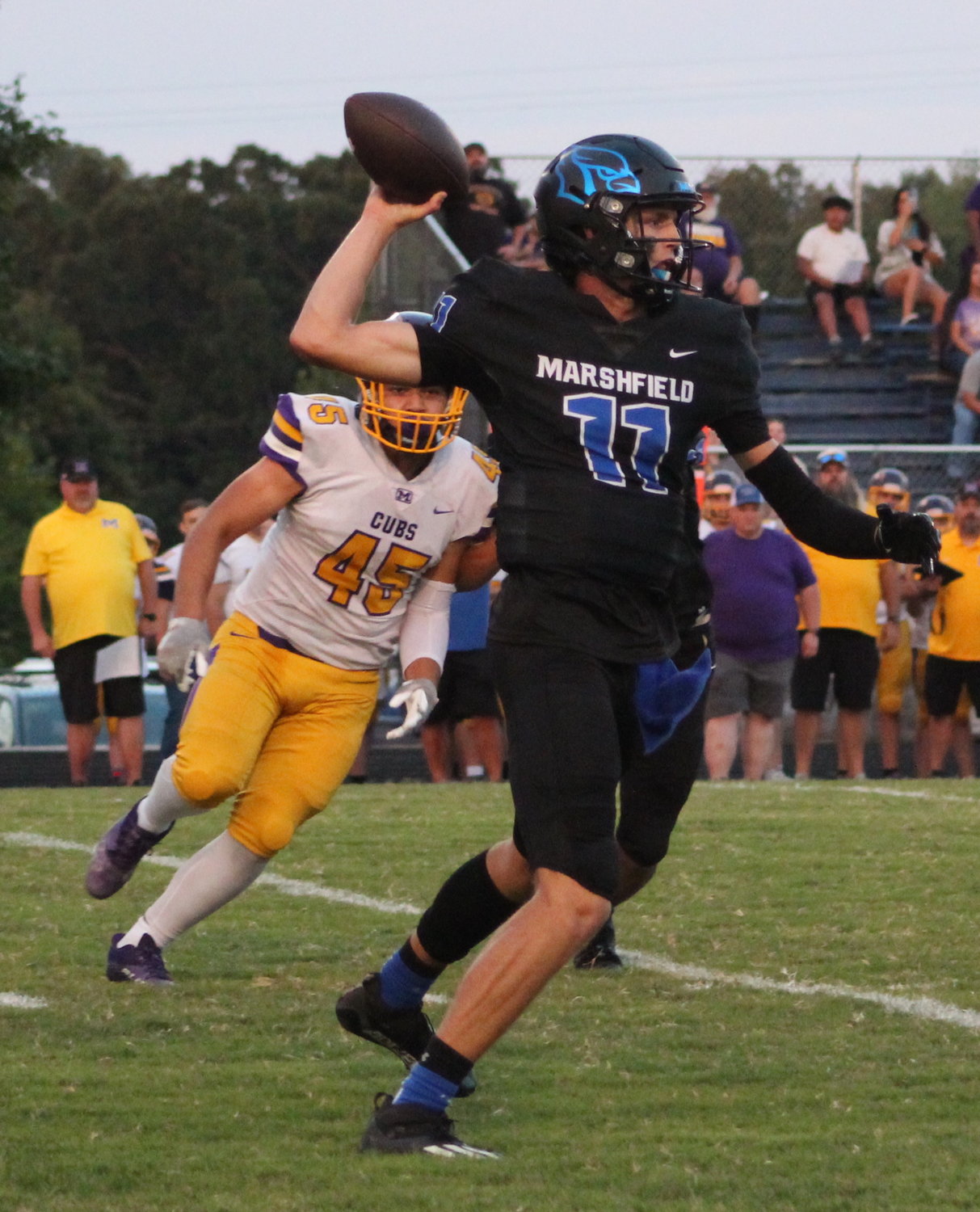 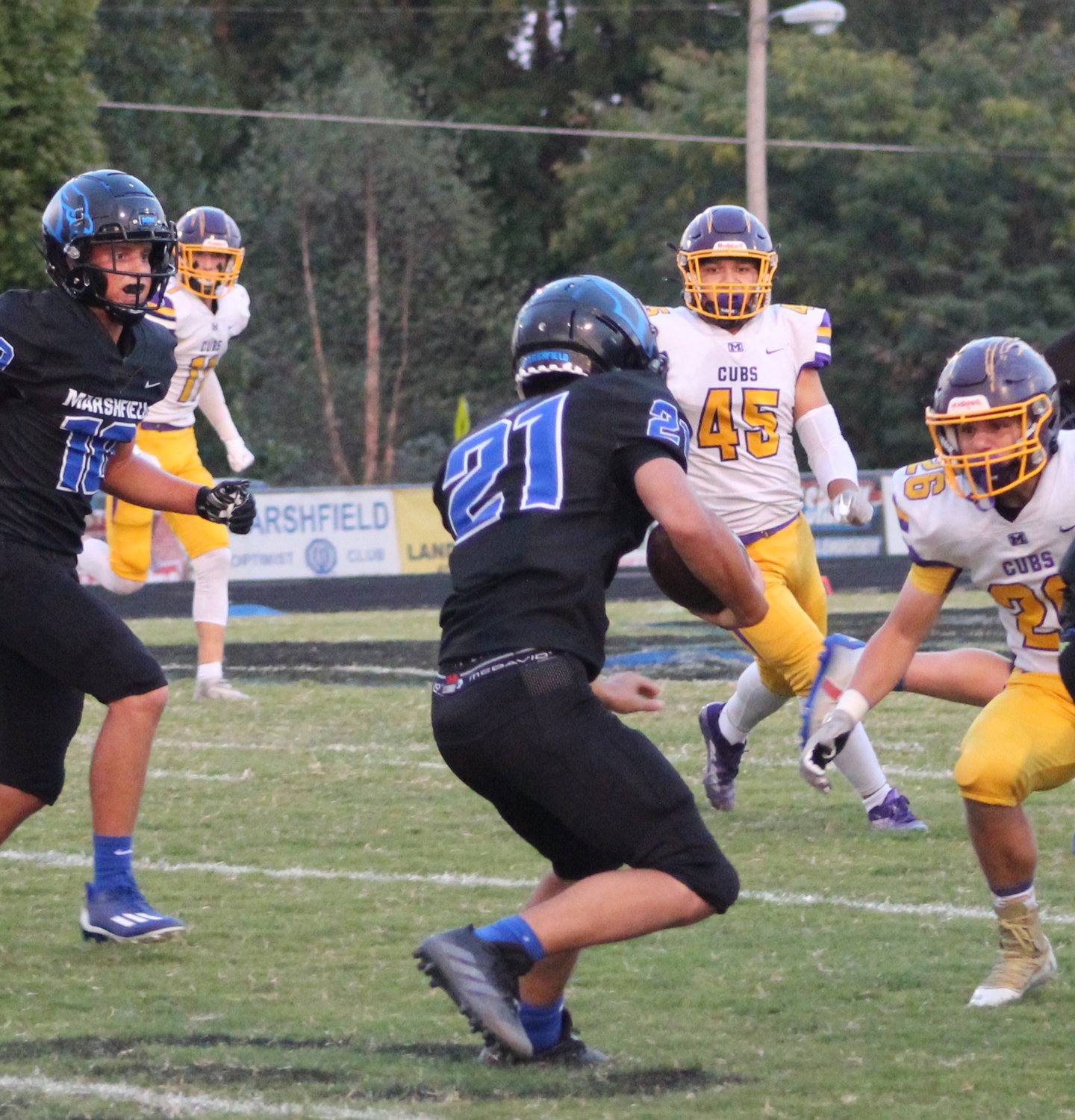 Dayvion Harris, Junior and key RB for the Jays weaves through the Monett Defense
Mail Photo by John “J.T.” Jones. 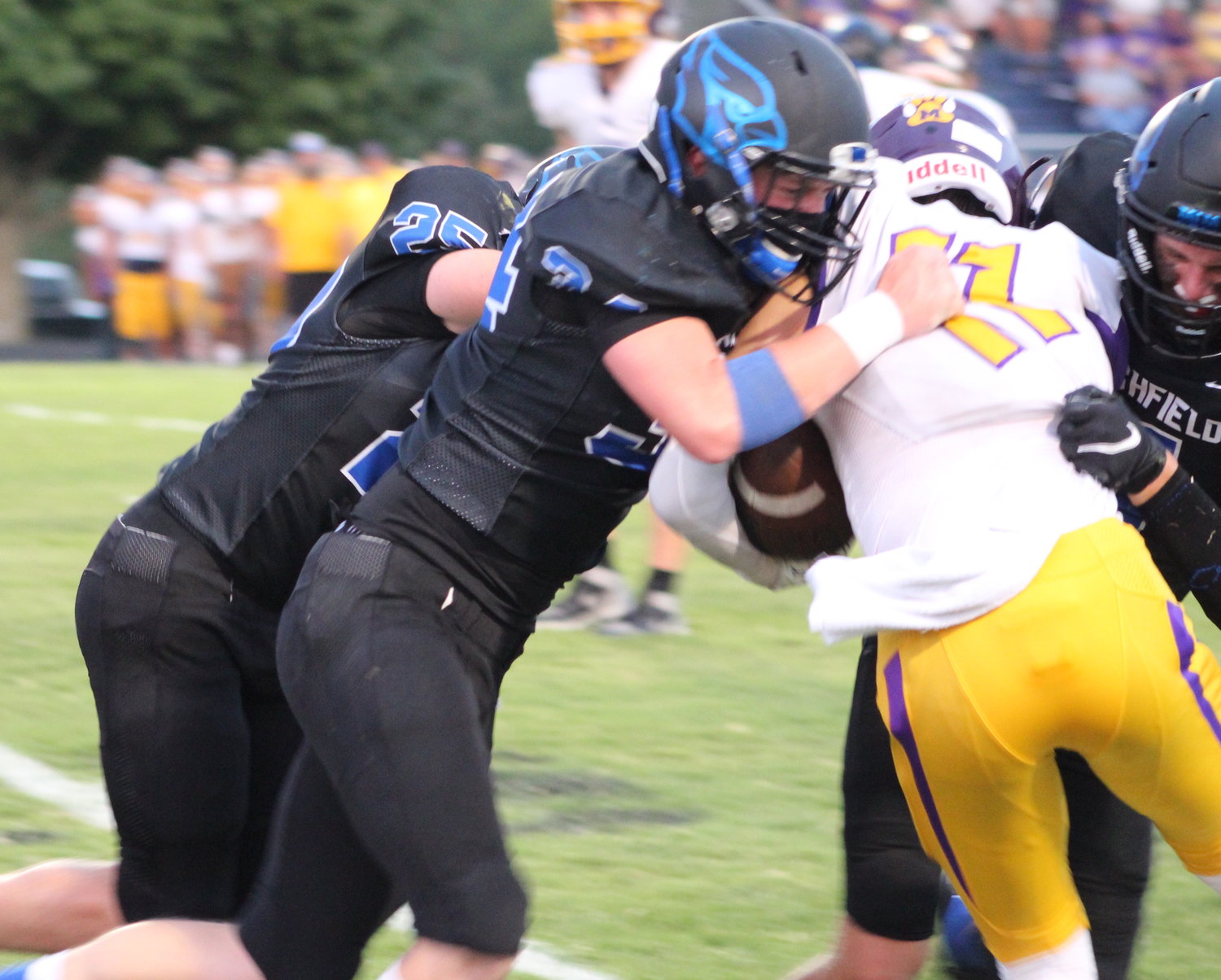 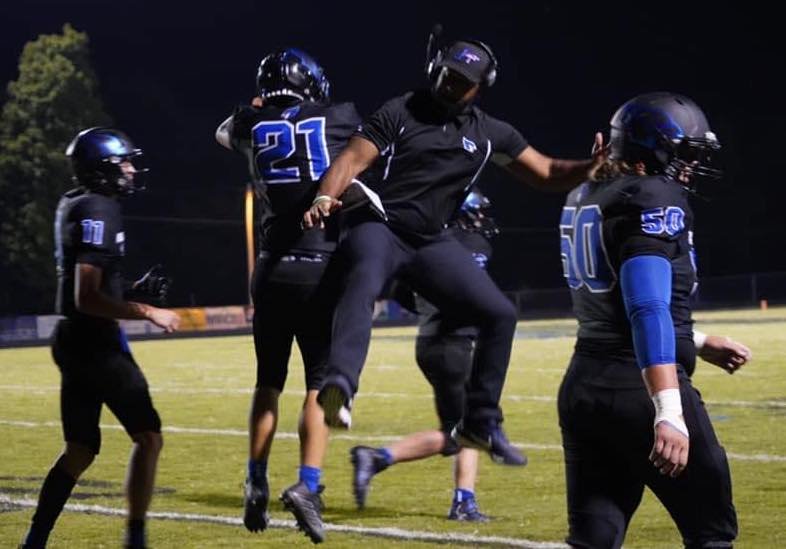 Coming off a close and eventful win, the Marshfield Bluejays were looking to keep the momentum on Sept. 16 when they took on the Monett Cubs.

Monett would kick off the first quarter, giving way to an impressive dash from Jays #9 Marcus Blackstock who received at the Jay’s 7-yard line and finished at Monett’s 33-yard line; a total of 66-yards. While it was an impressive way to start the game, it was short-lived as the Cub’s solid defense would prevent the Jays from advancing further. However, Marshfield would return the favor with its iron defense. With only 44 seconds left, Monett would score first with a field goal ending the first quarter 0 to 3.

The second quarter would see the Jays ruffle some feathers and make some impressive plays originating from the Jays' quarterback #11 Bryant Bull who connected a 33-yard pass to #86 Tyler Young. A few plays later, #11 Bryant Bull would complete a 28-yard pass to #3 Marcus Gritts scoring the Jays' first touchdown of the night and the extra point courtesy of #70 Shawn Bearden. Bluejay Defense would hold strong resulting in a turnover back to the Jays.

The Jays would complete a 13-yard touchdown run thanks to #21 Dayvion Harris. Unfortunately, the Jays were unable to complete the extra point.

The Cubs retaliated by breaking through the Bluejay defense, scoring a touchdown and scoring an additional point.

Marshfield, again, responded with #11 Bryant Bull launching a 35-yard pass to #4 Travis Greenfield and scoring another touchdown. With the completion of another field goal by #70 Shawn Bearden, that play would close out the second quarter of the game with the Jays' leading 20 to 10.

The Marshfield Bluejay Marching Band provided the halftime show and performed its 2022 production titled Elevated; an uplifting movement with theatrical themes presented throughout.

The third quarter kicked off with a run by #11 Bryant Bull, which ended at the Cub's 41-yard line. A few plays later, #11 Bryant Bull would pass to #21 Dayvion Harris, who pressed on further and scored the next touchdown and extra point. Marshfield would keep the pressure on Monett, forcing the Cubs to punt.

The referees would see action in the 3rd quarter, awarding penalties against both teams. Flags ranged from holding, face-mask, and pass interference. The Cubs would follow that bad news by intercepting #11 Bryant Bull’s pass after using a timeout at 2nd & 30. However, the third quarter would end with the Jays leading 27 to 10.

The fourth quarter would be a roller coaster of emotions and plays. The Jays' #30 Jackson Dill would recover a fumble which would set up the Jays up for a momentous play by  #11 Bryant Bull. The Jays quarterback decided he wanted in on the touchdown, ran the ball 10 yards, scoring the fourth touchdown, and completing the extra point. The Jays would kick off to the Cubs, who responded with a touchdown and extra point of their own. The Jays and Cubs finished off the better half of the fourth quarter with a game of tug of war but ultimately ran down the clock. The Jays would secure their 2nd win of the season with a final score of 34 to 24.

With two wins under their wings, the Jays (2-2) will be flying away this coming Friday, Sept 23, as they take on the Reeds Spring Wolves (3-1). It will be paws vs. wings match, and only one will win. The only way to find out will be by attending the game, which starts at 7:00 p.m.