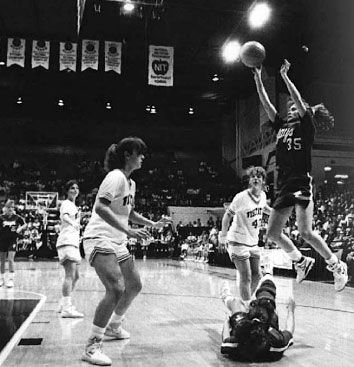 Melody Howard (35) launches a midrange jumper from the corner in the Lady Jays’ thrilling 55-52 win over Visitation Academy in the 1989 Class 3 state championship. The win gave Marshfield its second straight state title, and moved “The Streak,” to 64 games in a row.

Former and current Marshfield High School Lady Jays Basketball players and coaches gather for a picture following the program’s induction at a Missouri Sports Hall of Fame ceremony in 2019.

Previous Next
Posted Thursday, August 5, 2021 6:32 am
By Bryan Everson bryane@marshfieldmail.com

Compared to Missouri itself, Marshfield’s girls basketball program is quite young. Its inaugural season was just 1975.

It cannot be omitted, though, when talking about the Show-Me State and historical greatness.

The Lady Jays, until recently, had the most unfettered period of dominance in the state’s history. From the start of the 1988 season and into 1991, they strung together 102 consecutive wins.

It’s a streak that’s not only the second-longest for a boys or girls hoops team in the state’s history, it’s among the 30th longest win streaks all-time in girls basketball in the nation.

Spectacular as that streak was, incredible successes followed as the torch was passed from one coach to another.

In the first winter of the program, Marshfield finished just 3-7. Its four first coaches were unable to reach the double-digit plateau for that matter.

It wasn’t until Scott Ballard arrived in 1982 that the tune changed. The team finished 16-7, then took another jump the next year by going 22-4, including a Central Ozark Conference title and the first appearance in a district championship game.

What his teams lacked in size –– no one stood over 5-foot-9 –– they made up for with incredible pace, which was seen with the Lady Jays’ full-court press that produced turnovers and points in bunches.

“We (forced teams) to play like their hair was on fire,” Ballard told The Mail in 2012.

“Our size never really was our strength,” added Stephanie Nunn (Ezard). “We would hear refs talking about not wanting to do a Marshfield game, because it was so fast.”

After averaging near 20 wins early in his tenure, Ballard's 1987 team foreshadowed greatness. Marshfield made its first state quarterfinal appearance and finished 25-5. A four-point defeat to McDonald County ended that season, and it turned out to be the last loss for quite some time.

The Lady Jays went into the Class 3 state championship 31-0, and took on another undefeated (32-0), powerhouse St. Charles Duchesne, in what some Ozark area sportswriters called "the best high school basketball game ever played." Tied at 35 at the inverval, the teams exchanged punches and counterpunches until Duchesne grabbed a one-point lead with five ticks left. Before time expired, All-State sophomore Melody Howard missed a long jumper, but another all-stater, Stacy Nunn, battled for the rebound and delivered a put-back bucket as time expired to win, 59-58.

In '89, Marshfield won multiple tournaments, fought off a Class 2 power in Springfield Catholic several times, and made a shorter trip to the state finals, beating Visitation Academy, 55-52, at the Hammons Student Center in Springfield to go back-to-back.

The 1990 season was another undefeated one as future Missouri State All-American Melody Howard and the Lady Jays dispatched Oak Grove by sixteen points to three-peat in Class 3.

At that point, Ballard translated his success to the college level and took the head coaching job at Missouri Southern. It could have spelled the end had Marshfield not nailed its task of finding a replacement in Morrisville’s Gary Murphy.

"I was a young coach and ready to get out and tackle the world when that opportunity came along," Murphy said recently. "I guess I didn't understand the enormous implications that came with the job. [They were] 96-0 when I got there, and a friend of mine told me, 'You want to be known as the guy who breaks the streak, huh?' I hadn't thought of it in those terms, but I just wanted to go somewhere where basketball was really important to the community."

By that time, basketball had become an incredible spectacle in Marshfield.

“Every away game was like the circus coming to town,” told Ballard. “Every time we went on the road, it was standing room only. The fact that our girls could handle that kind of pressure is simply amazing.”

Added Murphy, "We would get out of school at 3:10, and if we had a home game that night, there'd already be an enormous line at what's now the junior high. People would line up for a half-hour before the school day even finished to get in and get a seat. When we traveled, we'd go to any opponent's gym and three-fourths of it would be blue.”

“We always felt like we were the home team.”

A game against Catholic on Dec. 15, 1990 could have been the burst of the bubble. The defending Class 2 champs beat Marshfield in Springfield, 73-65, to end "The Streak” as players had to watch Catholic fans storm the floor like a college sports underdog knocking off the No. 1 team in the nation.

It wasn't. The Lady Jays avenged the loss to the Lady Irish over the holidays and ran the table the rest of the way, averaging over 79 points that season and finishing by again defeating Visitation for a fourth-consecutive state title.

"It was just expected to win a state championship [that year] and nothing less," Murphy said. The year before at Morrisville, we'd gotten second, and [winning a title] was something I'd thought I'd always want to be a part of, but it felt a little different than what I thought," Murphy said. "It was old hat to Marshfield. They had hotel reservations in October for the Final Four. I guess that's why I said [at the time] that it was a relief."

It took some time before Murphy proved he could develop a fresh batch of champions. “I felt a little bit like that the first year we won, it was Coach Ballard's players, and we did what we were supposed to do,” he said.

“When we got up there and won a state championship in '96, that was kind of unexpected because we weren't projected to do that well,” Murphy said. “Republic had been the dominant team who'd gotten the better of us, and when we beat Republic in the quarterfinals, then went into the Final Four and won easily, I felt not relief, but exuberance."

“That bunch had done it when there was only one senior, so that was fun because the best might have still been yet to come. The nucleus [in '96] was mostly juniors, and there was a talented bunch of freshmen that came in. That was probably the most talented group I coached. Our second group [of five] probably could have won the state championship, too.”

Could it be the next wave of history to be made by one of the state’s greatest hoops programs?

“There was consistency and winning tradition, class after class that wanted to maintain," Murphy said. "Where could you find a better place where the community had the passion for girls basketball than Marshfield? It was a special place throughout most of the time I was there...it meant a lot to me, and the program mattered to the kids, and the community."