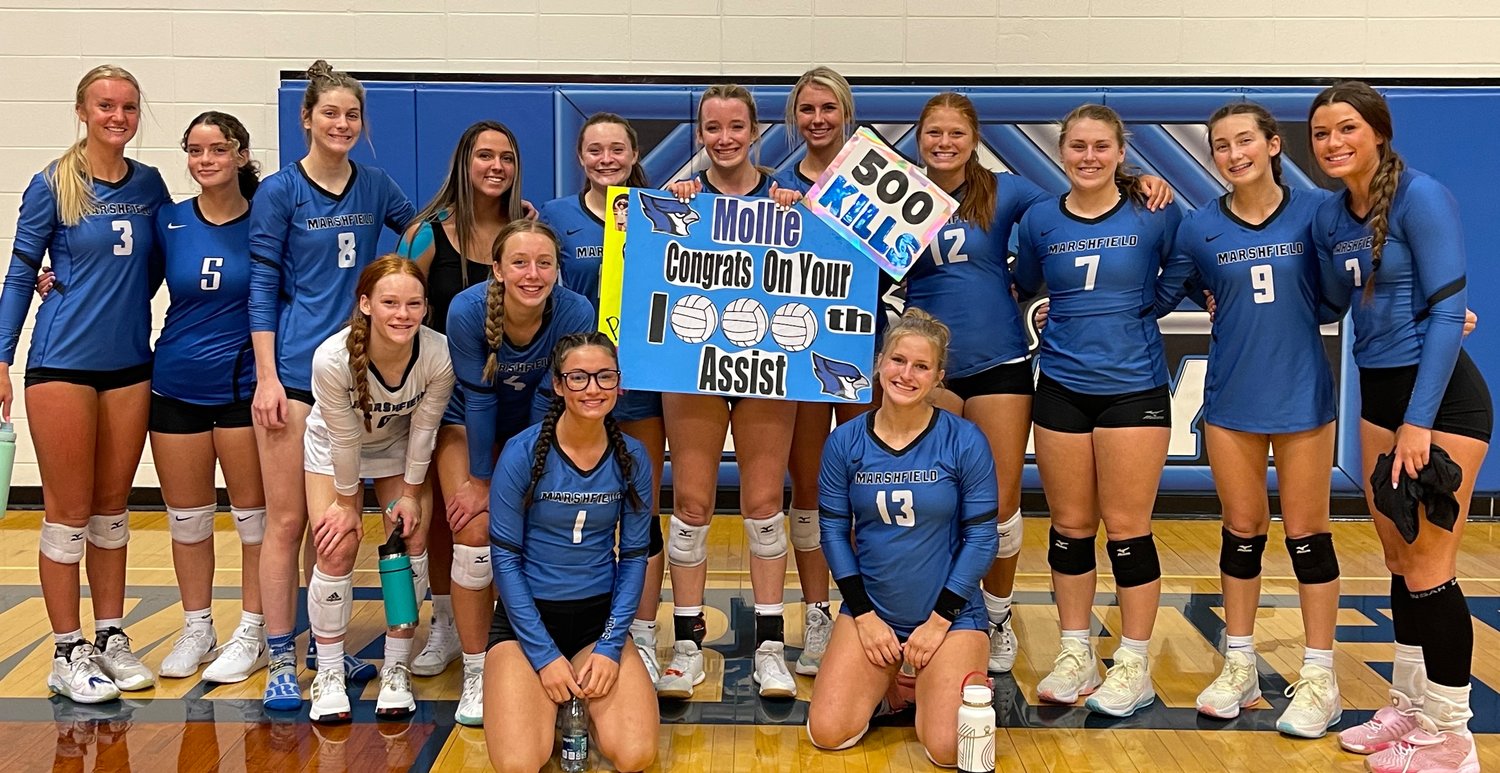 Mollie celebrates her 500 kills and 1,000 assists after the game against Republic on September 14.
Amber Brand 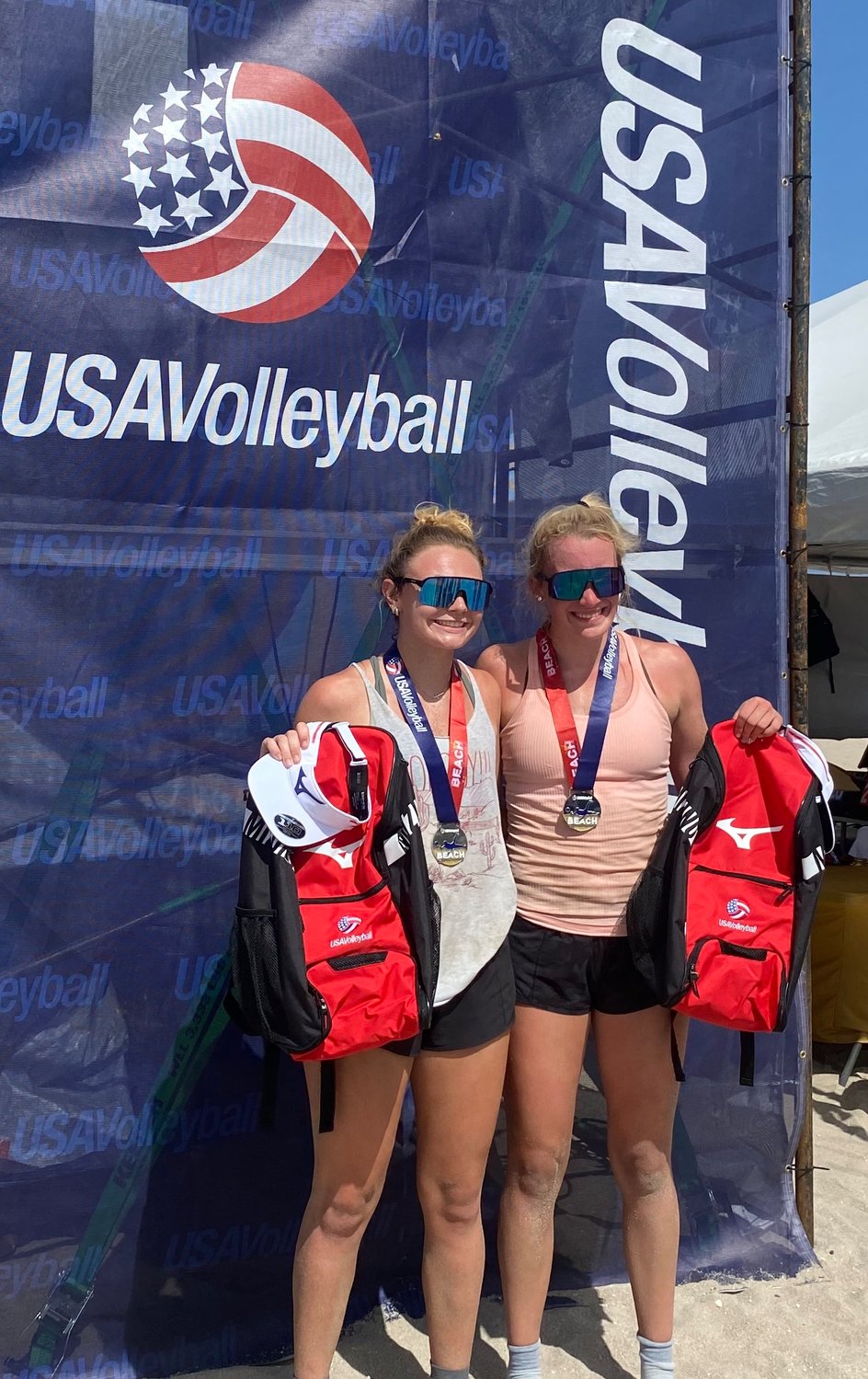 Mollie Thomas (right) has been playing beach volleyball for years. “I want to get better at blocking and attacking,” shared Mollie. “I’m looking forward to next summer a lot. We will be 17 playing in the 18s for beach. We got second this year, so I’m really excited for Nationals.”
Contributed by Leslie Thomas
Previous Next
Posted Wednesday, September 21, 2022 12:00 am
By Amber Brand amberb@marshfieldmail.com

It is nothing new to hear about Marshfield Schools Athletic Department turning out amazing athletes: from football players to wrestlers, the Blue Jays coaches continue to shape, cultivate, and coach some of the best athletes in the region.

But what happens when you combine a passion for the game, a hardworking and driven athlete, coaches and mentors from not just Marshfield, but across the nation, and parents committed to seeing their daughter achieve her goals?

Combine those things and you get Mollie Thomas, a 16  “almost 17” year old Marshfield High School Junior and volleyball player whose smile lit up the room during her interview with the Marshfield Mail.

“I’ve played indoor since I was nine I think, nine or ten,” shared Thomas. “I started beach when I was eleven, and competitively when I was twelve.”

Thomas, who started playing indoor volleyball at a young age, quickly realized her love of the sport and by eleven was playing year round by playing both indoor and beach volleyball.

“I’ve played club indoor for Apex volleyball and beach for Prime beach. This year I am going all beach,” shared Thomas after confirming that beach is her favorite type of volleyball to play.

While Mollie Thomas is only a Junior, her future is bright. This past week at the September 14 game against Republic, Mollie hit a personal record for her high school career claiming 500 kills and 1,000 assists.

“It’s awesome to celebrate, as far as personal records for assists and kills she’s not there yet but she is just a Junior. I see her being able to break that stuff,” laughed Coach Jared Olson, Head Volleyball Coach, Assistant Boy Coach and Building Trades teacher for Marshfield High School. “She’s a great setter, great hitter, has a very dynamic swing. I love having her out there on the outside because she can handle a lot of assists and ball; she just has so much experience.”

Mollie’s experience comes from playing both indoor and beach volleyball for the last several years.

“I have only known her on the beach but…as an overall player (she) is hard working, tenacious and mindful,” shared Vincent Miranda, owner at Prime Beach Volleyball and Mollie’s beach coach.

“…coaching her (with) Volleyball Beach Ozark, has been a great experience,” shared Miranda. “She is a great person and athlete. I remember my first coaching interaction with her. I gave her one tip to do something that would allow her to be more successful…without a blink…she implemented said task with vigor…”

In addition to racking up hits and assists during high school volleyball, while also being known as a dedicated and hard working player, Mollie was invited to try out for the fab50 with Carrie Walsh-Jennings, Co-Founder of fab50 and three time Olympic Gold medalist.

“I try out for that in November, then we just go on tour for the P1440 tour…We’ll just travel all winter, all over the country, for tournaments,” explained Mollie when asked what happens when high school volleyball wraps up.

“She will be playing on the P1440 Juniors tour. It’ll be two weekends a month out of state, lots of tournaments,” shared Leslie Thomas, Mollie’s mom, full-time travel partner and possibly biggest fan.

“Volleyball Beach Ozark has been great in letting us use their facilities,” added Coach Miranda. “(That facility) allows us to train even through the winter.”

And if all that isn’t exciting enough for the “16, almost 17” year old Junior, just recently Mollie gave a verbal commitment to play beach volleyball at Florida Gulf Coast University.

“During the recruiting process I’ve talked to a lot of different coaches. But my relationship with Coach Sweat…it felt right, it was really fun getting to know him. The moment I got on campus, I just knew right away,” reflected Mollie.

Mollie’s success and skill comes at a cost. While most of her friends spend their summers at the pool, taking vacations or having sleepovers; Mollie spends a lot of time practicing.

“She misses a lot of things. She doesn’t go to the lake. She misses parties. She misses dances. She’s given up a lot to be able to play at this level,” shared Leslie Thomas, Mollie’s mom and possibly, biggest fan.

“But I don’t think she regrets it-do you regret it,” she asks Mollie who quickly shakes her head NO and confirms what Leslie already knows. “This is her dream.”

While Mollie has verbally committed to a school to play beach volleyball, she still has no clue what she wants to study. “They have a really cool water school, it’s not like marine biology-its different, but I might look into that,” she laughed.

While Mollie still has another year and a half of High School to finish before moving away to Florida, her parents and coaches are excited to see her grow in her sport. “I just like watching my little girl play,” smiled Mollie’s dad Craig Thomas. “Wherever she’s at and wherever she’s happy.”