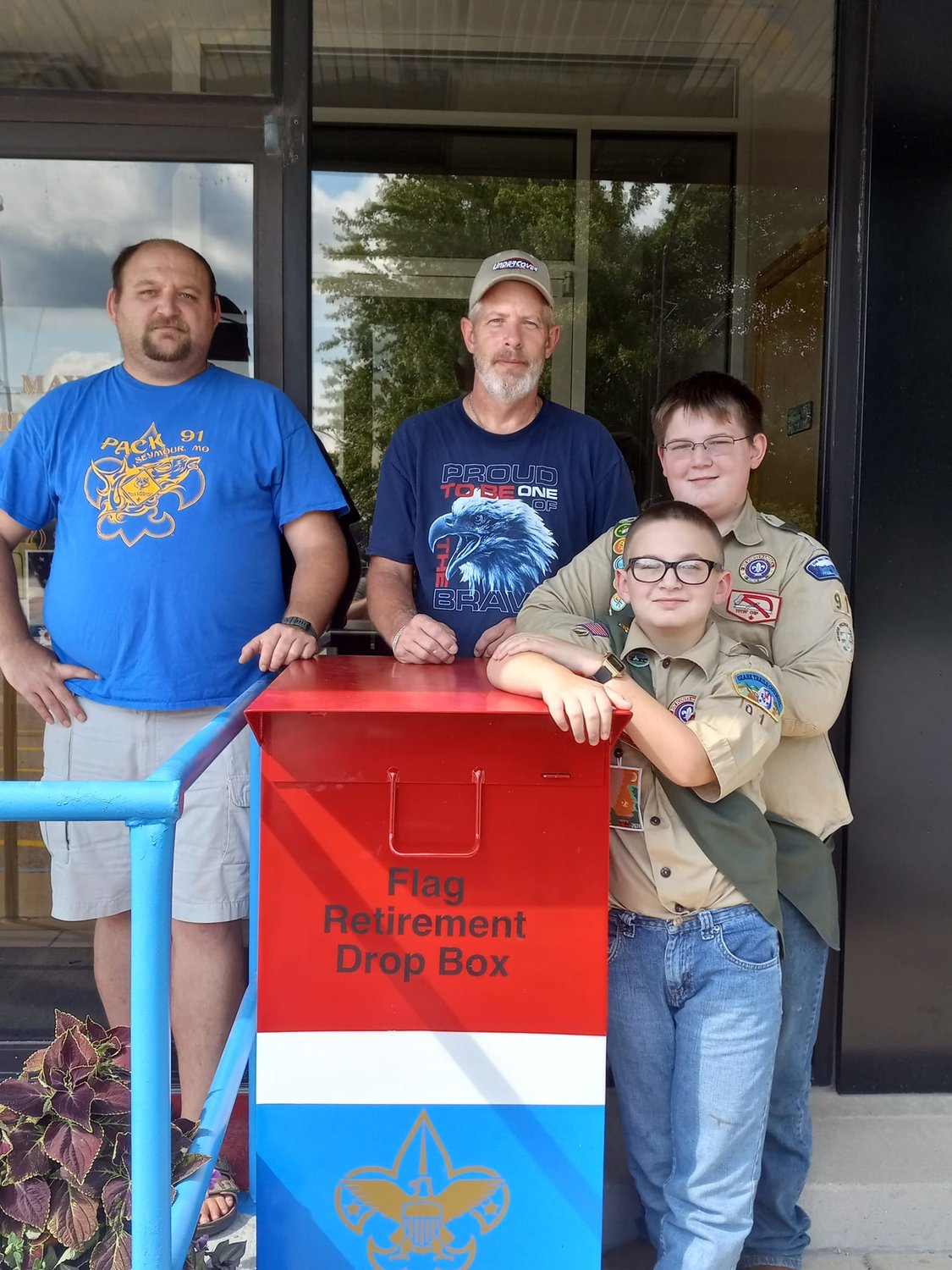 Scout Master for Troop 91B Richard Bell (left) stands with James Gagne (right) and his two scouts, Vaughn and Scot Gagne, with one of the two new retired flag drop boxes. Bell shares how the idea came to him, “I had seen that many different Scout Troops across the country have set up drop boxes for retired flags…So I thought this would be simpler for everybody involved.”
Contributed Photo by Nicole Christeena Lucas
Posted Wednesday, September 7, 2022 12:00 am
By John “J.T.” Jones johnj@marshfieldmail.com

The American flag is one of the oldest symbols in our country. Its significance and imagery represent our country and what it stands for, but what happens when that representation of America starts to age? When the weather has taken its toll, it is torn, or the colors have faded? Well, for citizens of Seymour, the answer was always Scout Troop 91. Every year, a retired flag ceremony is held by the local boy scouts. In the past, the scouts would gather around 40 to 50 flags ready for retirement.

However, coordinating the time to gather the flags proved to be a challenge. Troop Master 91B Richard Bell remembers receiving calls from the Seymour City Hall, the Library or various other businesses offering flags ready for retirement, meaning he would have to change his schedule or count on one of the scouts to pick them up.

Bell recalls "I had seen that many different Scout Troops across the country have set up boxes for retired flags, so I thought, ‘instead of me getting a call from the library or city hall telling me they have flags. Why not do that?”

That is in fact what happened and these drop boxes carry with them a fascinating history.

Bell educates, "They used to be ballet boxes. The Secretary of State for Missouri has a surplus of them”.

"Joyce Simmons, our Library Director, got a couple of them for book drops for the library. She and I were talking about the boxes and told me, 'I can order some more, they do not cost a thing.' So about six weeks later the boxes came to the library and we set them up,” Bell shared.

These drop boxes will make things much easier for the scout troop and everyone involved. Now anyone can turn in a retired flag. The drop boxes are located at the Seymour Community Library on 320 E. Clinton Ave, and the other box is located at the Seymour City Hall on 123 W. Market St. The troop's plan is to stop by and pick up the flags once a month. Then around Veterans Day, the scout troop will have an official flag retirement ceremony that everyone is allowed to attend. Details are still being worked out for this year.

Bell also informs, "It is generally at the square. Anyone can attend.”  He also encourages First Responders, Active Duty, and retired Veterans to participate in the flag retirement ceremony.