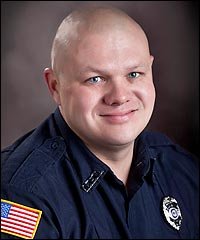 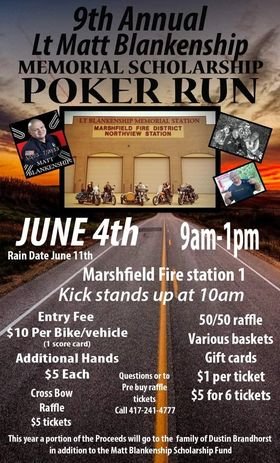 The life and legacy of Lieutenant Matthew Blankenship is one not easily forgotten in the small town of Marshfield. In July 13, 2013, Blankenship responded to a structural fire near the Niangua area. He received severe burns and injuries after being temporarily trapped inside the building. Blankenship was rescued by fellow firefighters and airlifted to Mercy Hospital, however, passed away from the injuries received in the line of duty on July 20, 2013.

To honor Blankenship’s ultimate sacrifice and assist with any financial burden his family would face, fellow firefighters and local community members put together a poker run to raise money. The poker run has now become an annual tradition, seeing its 9th year on June 4.

Raising a significant amount, the money has since been invested into a scholarship fund.

“In 2014, we put a scholarship fund together…We sponsor a scholarship each year for a high school student who is interested in emergency services or related fields as a career option and we've awarded that scholarship every year since,” explained Chief Michael Taylor of the Marshfield Fire Protection District.

The scholarship is $500 and available to any student interested within the Marshfield Fire Protection District.

Along with the scholarship, a portion of this year’s proceeds will also benefit the family of Dustin Brandhorst. Brandhorst was an Ebenezer firefighter who recently died in the line of duty in March of 2022.

The poker run also acts a moment to commemorate the lives of lost firefighters.

“We've always had a an excellent turnout from the community and of course from our organization, as well as other departments in the area,” shared Taylor. “It’s good for Matt's family to be able to see the support that is ongoing for Matt and get everybody together again.”

The poker run will run between 9 a.m. to 1 p.m. at the Marshfield Fire Protection District headquarters at 521 S. Prairie Ln, in Marshfield. For questions or to buy pre-buy raffle tickets call 417-241-4777. The rainout date is planned for June 11.