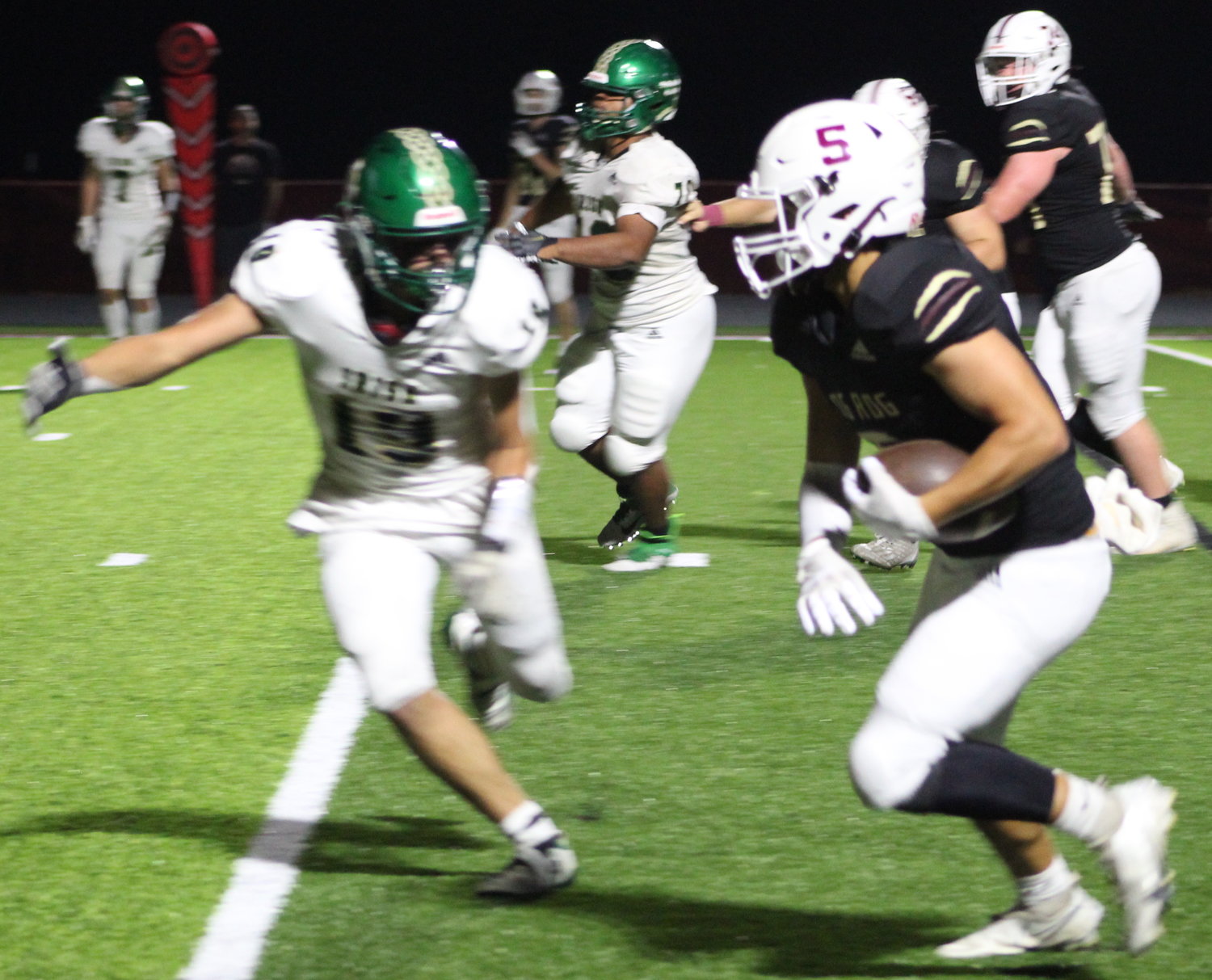 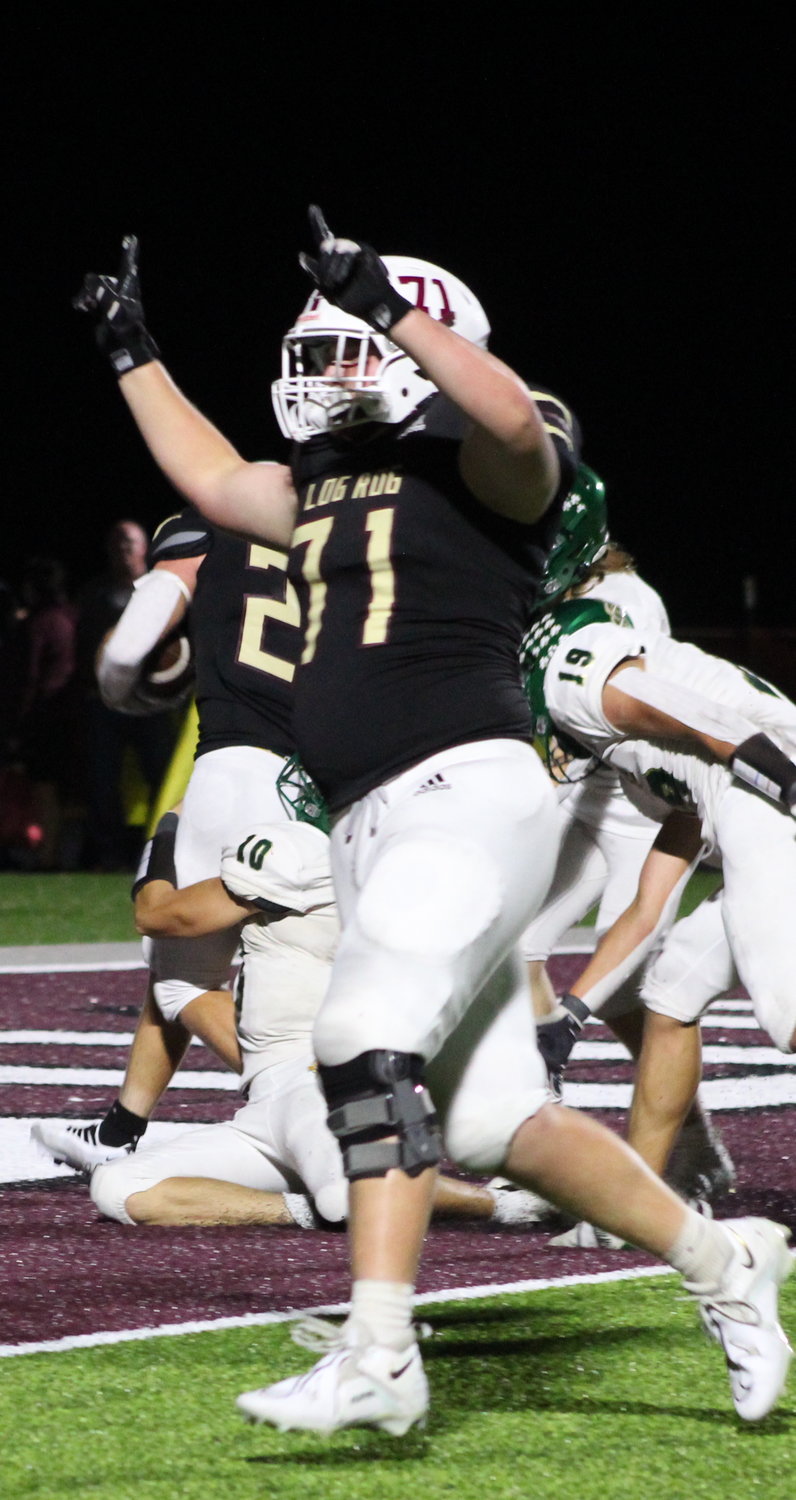 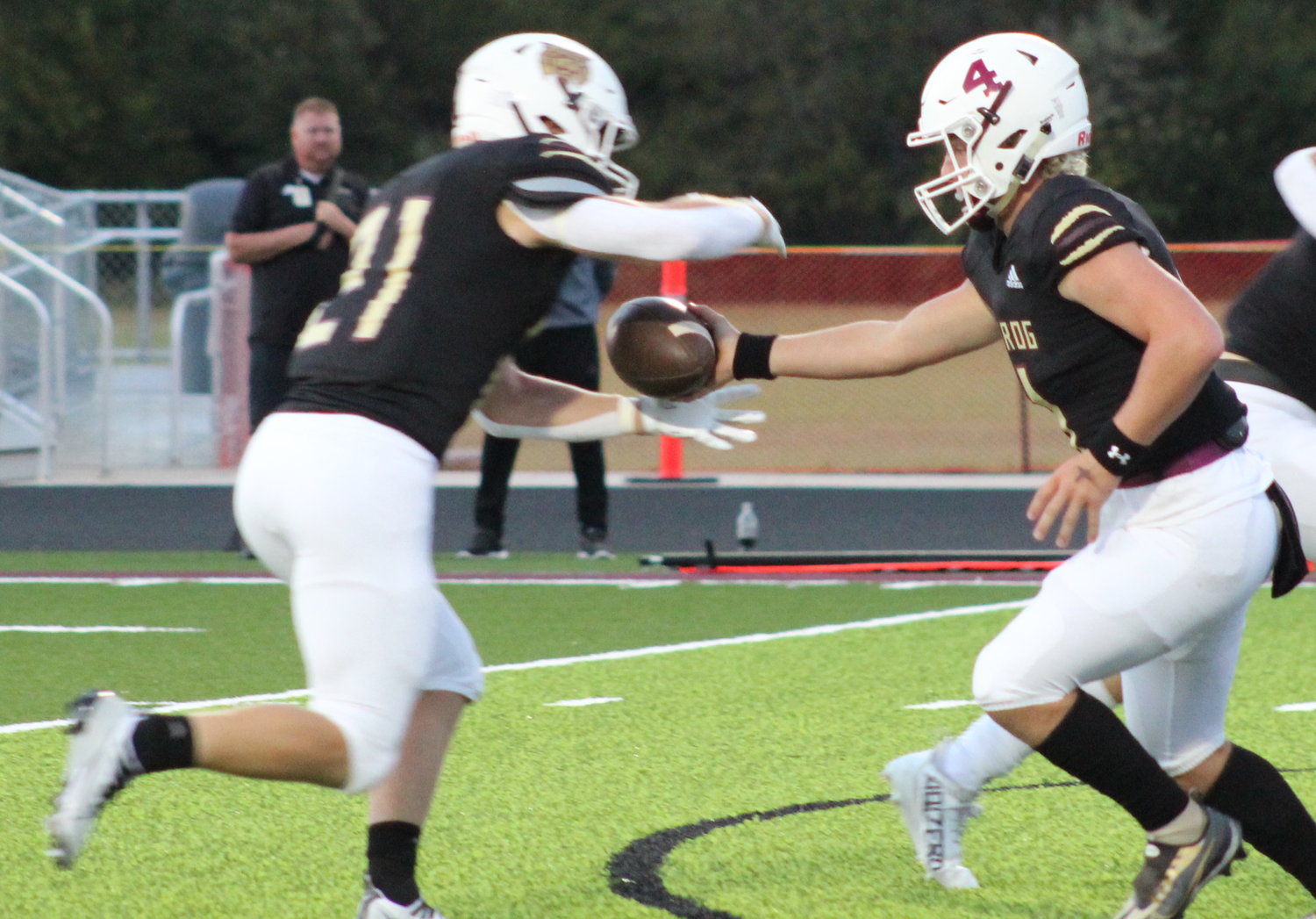 Is it a hand-off or a fake-out? Only seniors Luke Hauer and Thessen Prenger know for sure.
Mail Photo by John “J.T.” Jones. 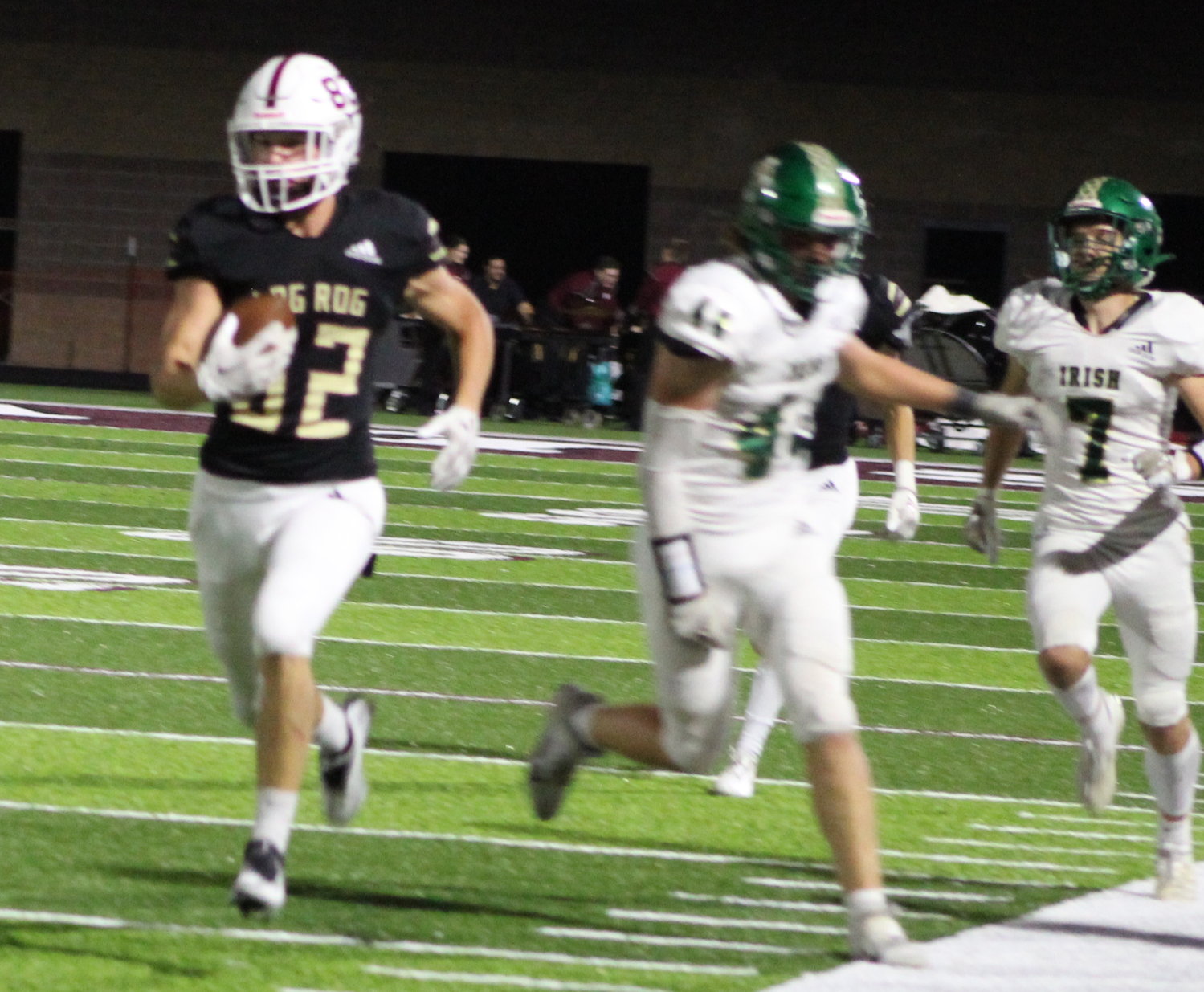 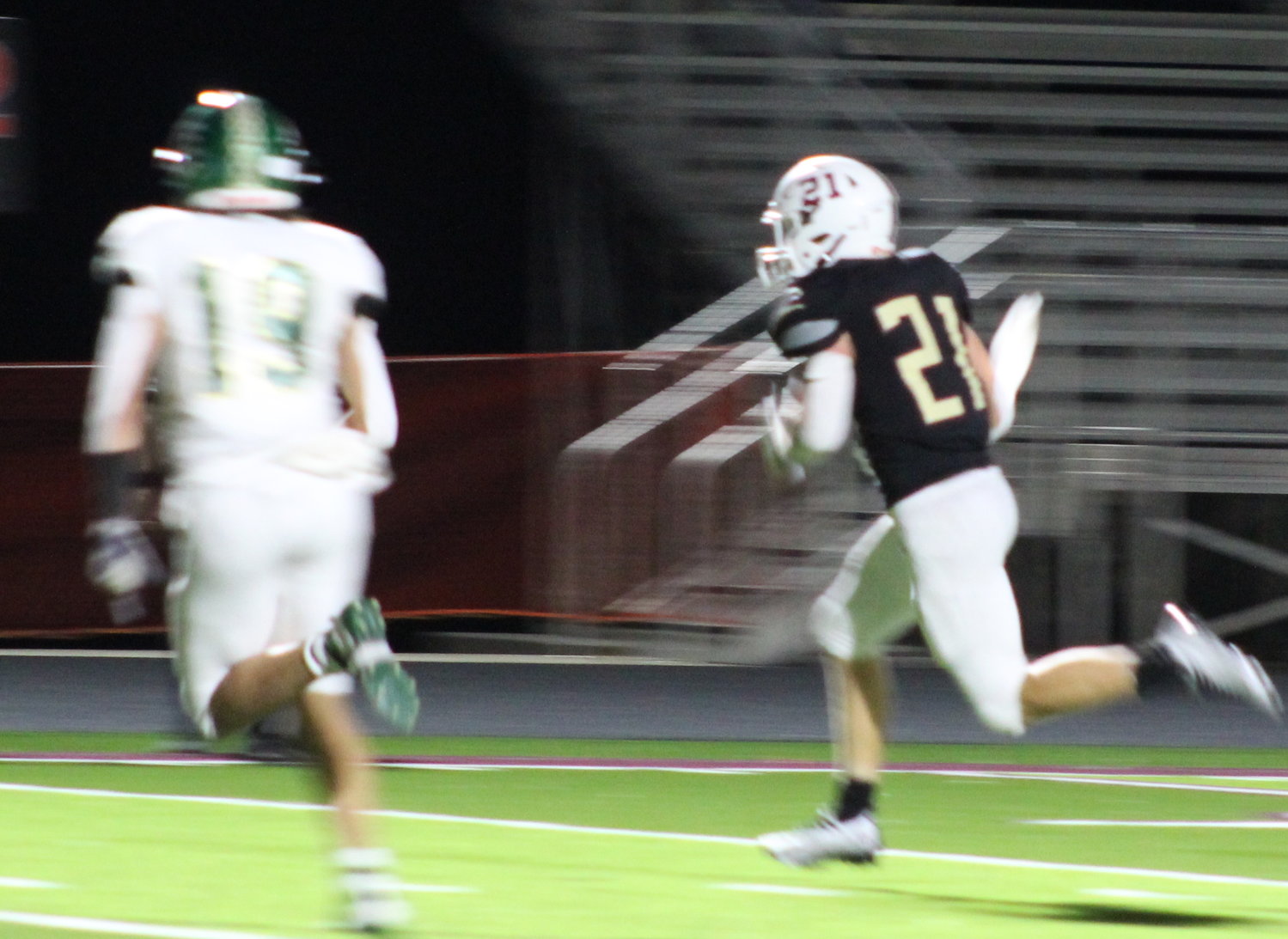 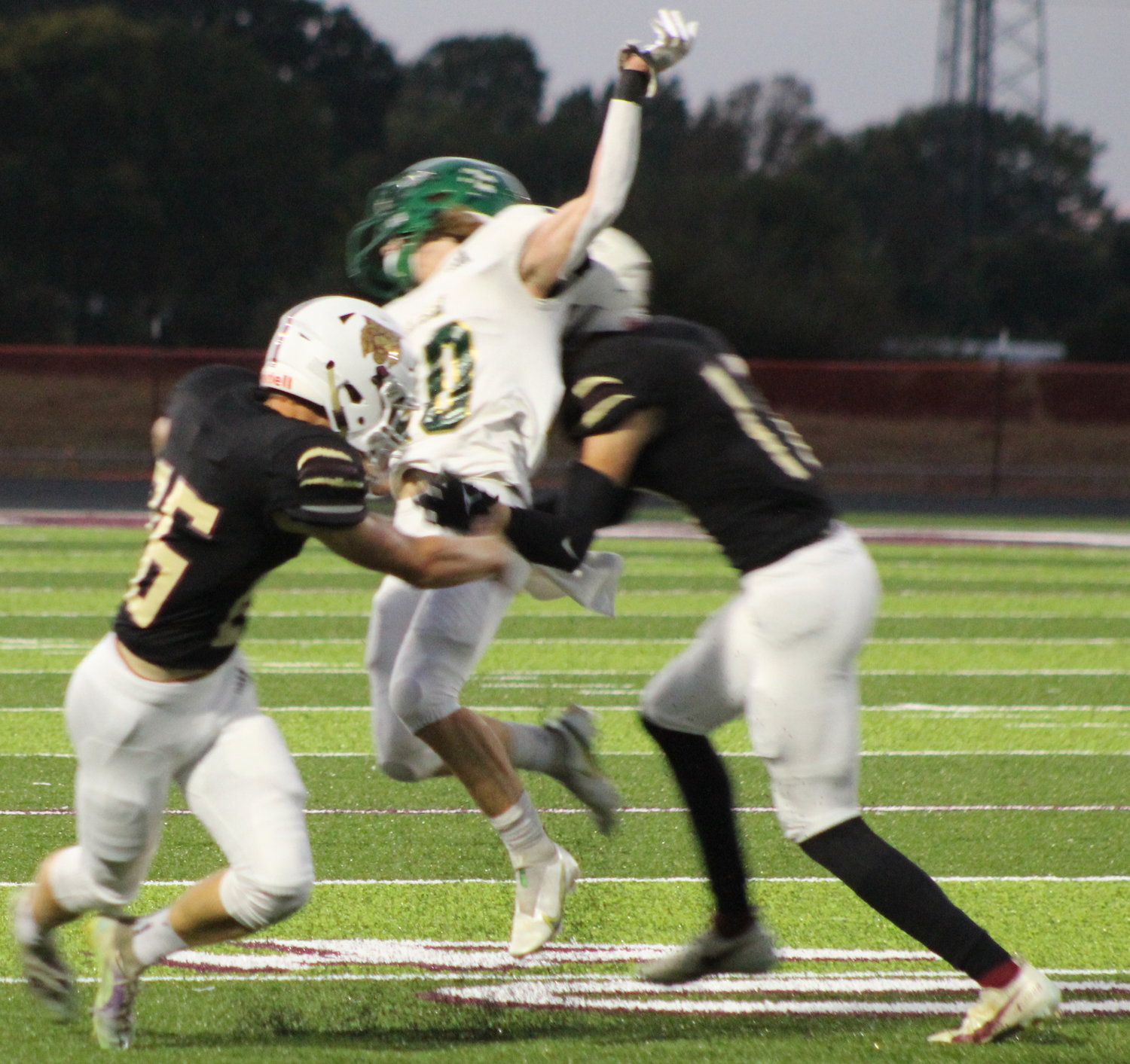 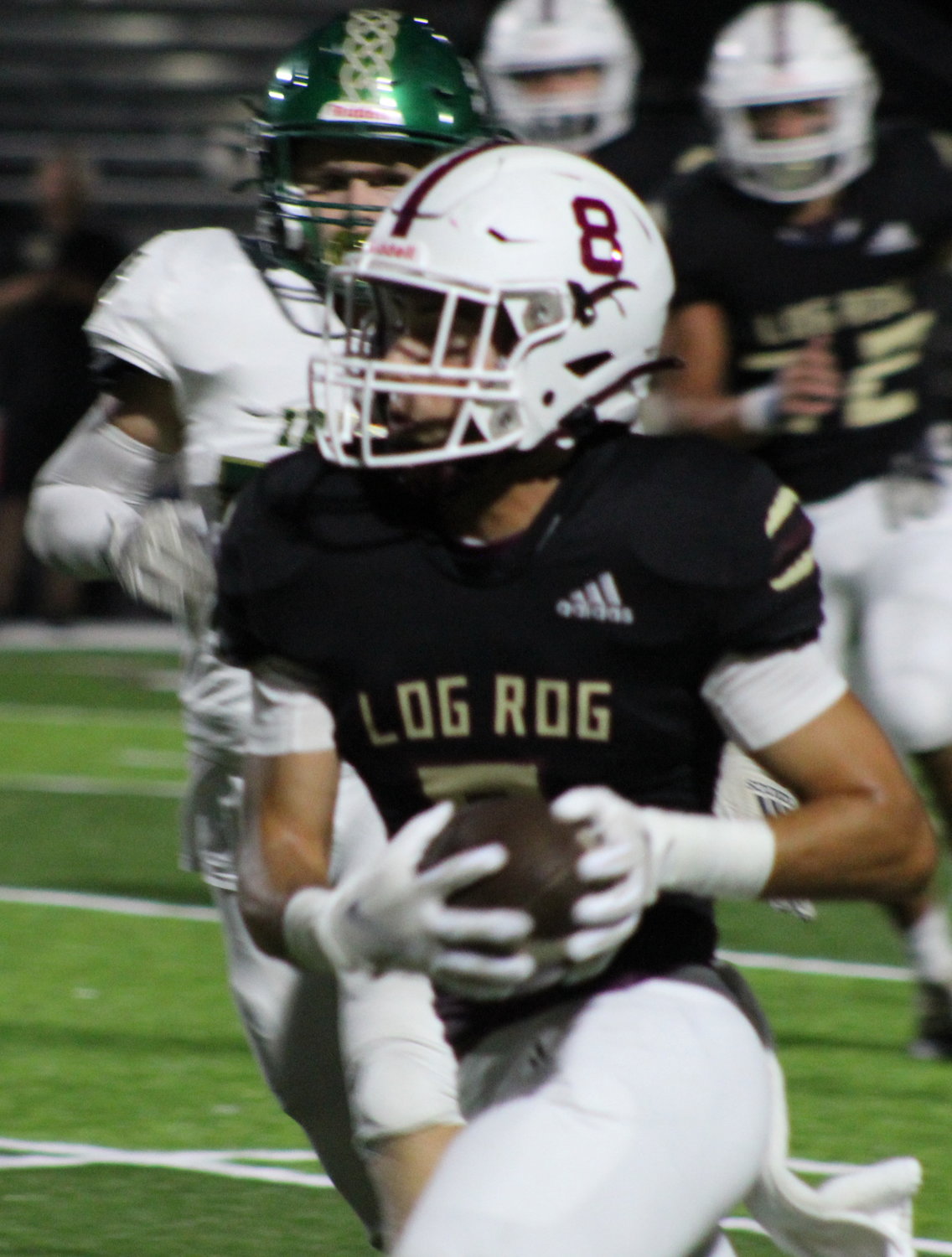 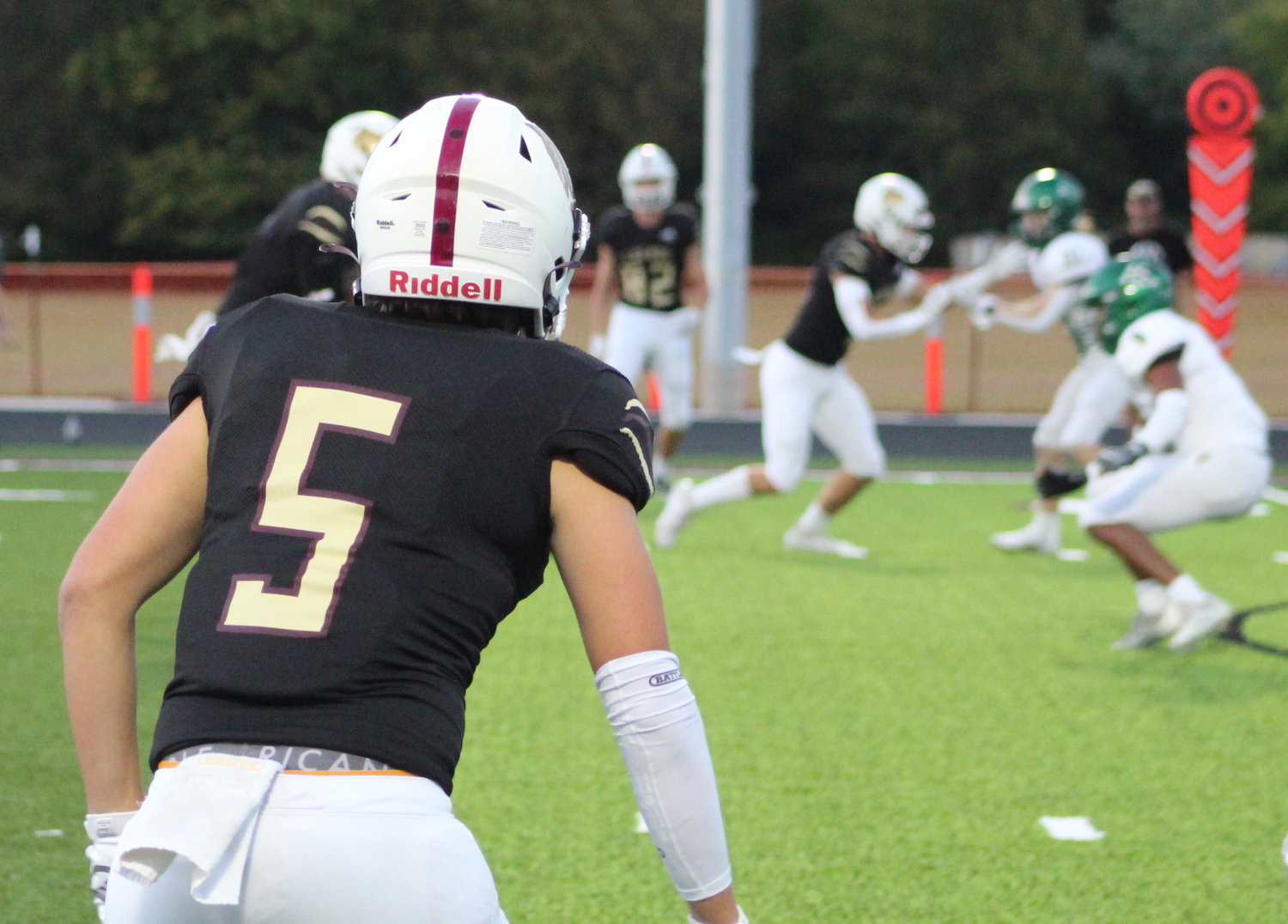 Last Friday, Sept. 23, fans of the Logan-Rogersville Wildcats gathered to celebrate Senior Night! Little did anyone know what would unfold that night; touchdowns, cheers, music, and… bears? The Wildcat Band honored their seniors, played the National Anthem and atheletes roared onto the field. L-R won the coin toss and chose to kick off against Springfield Catholic.

The first quarter started for S-C when #8 Garrett Carlson intercepted the pass and gained ten yards. Inching closer to goal, #2 Caleb Cole would eventually score the first touchdown and #4 Thessen Prenger would kick the field goal and earn the Wildcats an extra point. Several minutes later, the Fightin’ Irish would have another round of bad luck as they fumbled the ball. Thanks to the quick action by #9 Brady Buckman, the Wildcats recovered the ball. Wildcats would quickly move the ball down the field and welcome #21 Luke Hauer drive in and score another touchdown. #4 Prenger earned the extra point. Just as things were wrapping up for the first quarter with only 35 seconds left, #82 Cameron Wray would intercept, giving control to the Wildcats for the third time in the game. The first quarter would end 14-0, L-R.

The second quarter would see the Wildcats complete a trick play against the Fighting Irish. #4 Prenger faked a punt and completed a 22-yard pass to #8 Carlson, who then ran for roughly 20-yards further. The next play, however, would see L-R fumble the end-zone. Still, thanks to #61 Brayden Kent would recover the ball, again, securing not only the Wildcats’ third touchdown but also his first varsity touchdown. #4 Prenger would earn the extra point.

The Fightin’ Irish would attempt to punt on their fourth down, but had other plans and #17 Carter Anthem immediately sacked the ‘un-lucky’ Irish and leaving the Wildcats just nine yards from the goal. #4 Prenger would secure this opportunity by passing to #1 Hayden Sircy, who would score  another touchdown for the Wildcats. The Wildcats would be unsuccessful in the extra point, but it did not appear to slow their momentum.

With less than two minutes left, #82 Wray would nab another interception and run the ball down 50 yards to S-C’s 12-yard line. #22 Kolbey Ballowe completed the dash to the end zone, and #4 Prenger secured the extra point. The second quarter would end in Logan-Rogersville favor 34-0.

Halftime was a two-part show which combined the hard work of the Pomcats dance squad and Logan-Rogersville band. Their performance took us camping, where the Band's performance gave fans a mix of earthly sights and sounds until a bear entered the stage. Lucky no harm resulted from the furry guest as a brave member of the color guard chased it off. The overall halftime show was the right mix of hype, school spirit, and campiness.

The third quarter would continue L-R's dominance against S-C. #21 Luke Hauer would complete a 16-yard handoff scoring another touchdown for the Wildcats. #4 Prenger completing the extra point. Later in the quarter, #2 Cole would complete a 38-yard handoff and set the Wildcats ready to pounce at the one-yard line. #2 Cole would rush in, scoring the last touchdown of the night, and #4 Prenger would kick the final extra point of the night. The quarter would end 48-0 L-R winning.

The fourth quarter of the game would see S-C still fightin’ but continuously stopped by the L-R defense. The Wildcats would also be halted in their attempts by the Fightin Irish, but at that point in the game, the Fightin’ Irish's luck had ran out. The Logan-Rogersville Wildcats would come out on top, ending the game 48-0.