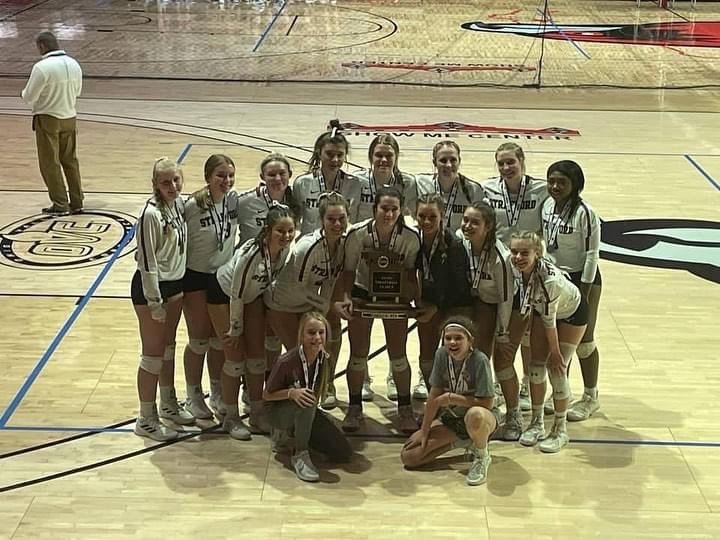 The 2021-22 Lady Indians pose with their second place trophy. Strafford conducted a send off for the girls when they left for state as well as inviting the community to welcome the state placers home on Nov. 6.
Photo by Strafford Volleyball Facebook Page.
Posted Saturday, November 13, 2021 8:00 am
By Abigail Swanigan abigails@marshfieldmail.com

The Lady Indians ended the season with a 30-4-3 record. Its final game was played against Blair Oaks for the Class 3 State Championship on Nov. 5.

“We were so proud of our kids and all of their accomplishments this year,” Ashley Bough, head coach mentioned. “It was such an honor to represent Southwest Missouri at the state tournament. I was proud of our team and how hard they worked to make it to the tournament as well as how hard they fought during the tournament. This team set goals to make this happen and I hope they will cherish this as much as I do. The standard for future Lady Indians to come has been set and I look forward to seeing what the future holds!”

The Lady Indians lost to Blair Oaks in three straight sets. Losing the first set 17-25 the second set 16-25 and the third set 18-25. While this ended the season, the Lady Indians returned home to Strafford with a second place trophy in Class 3.

An outlet for homeschooled atheltes

The stigma of young love