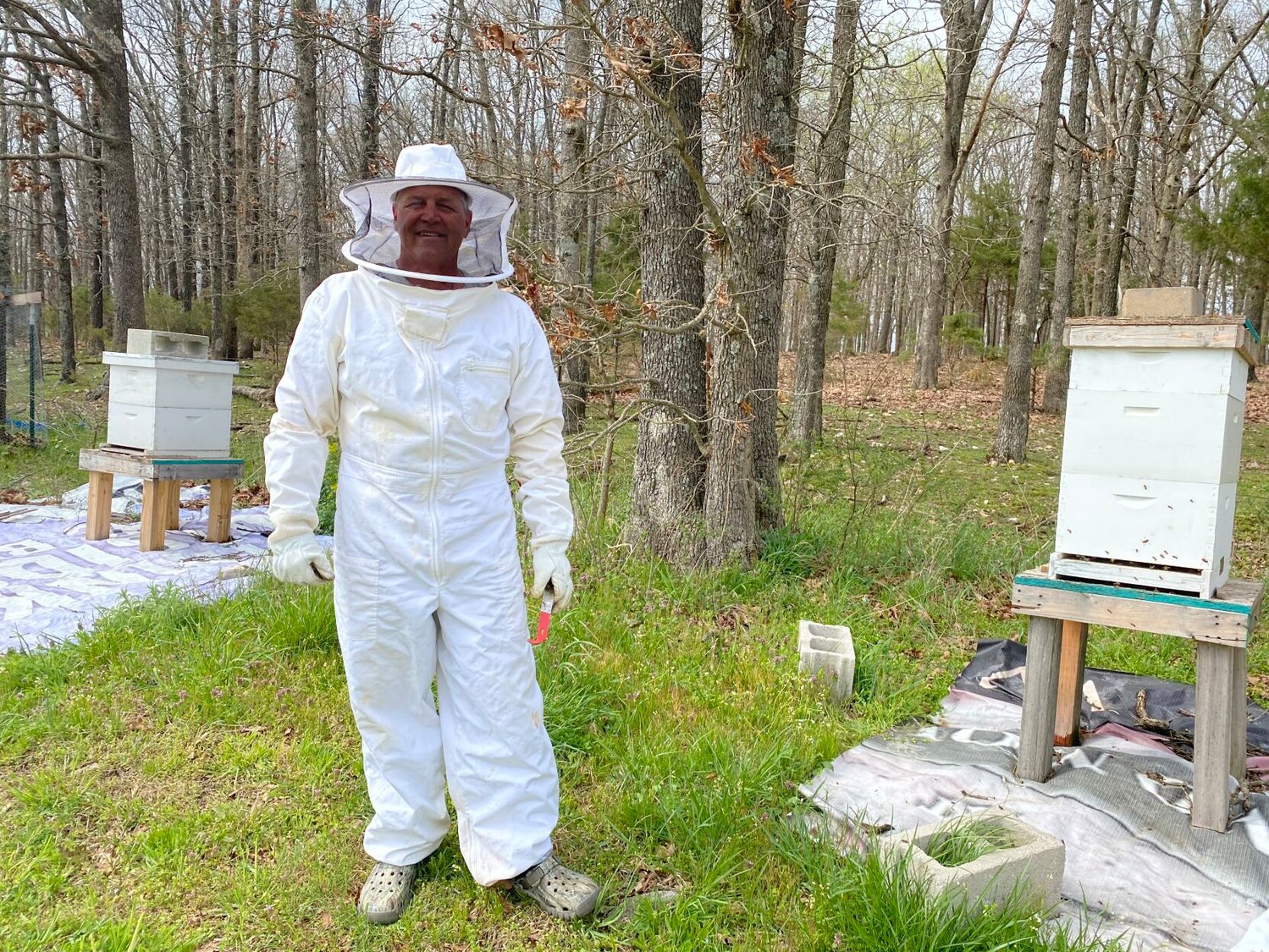 Terry Hardy pictured between his two nucs in his backyard located in Marshfield, Mo. 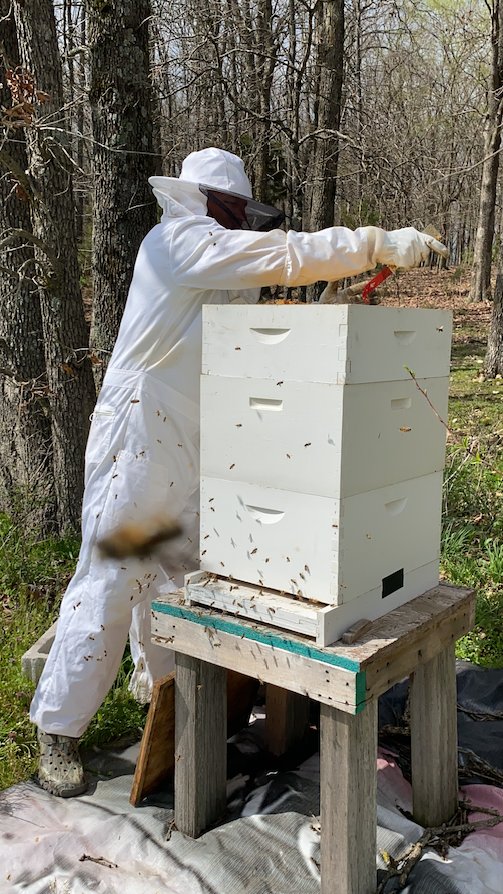 While Hardy will often tend to his bees without a suit, he tries to always wear a masked hood to avoid stings to his face. 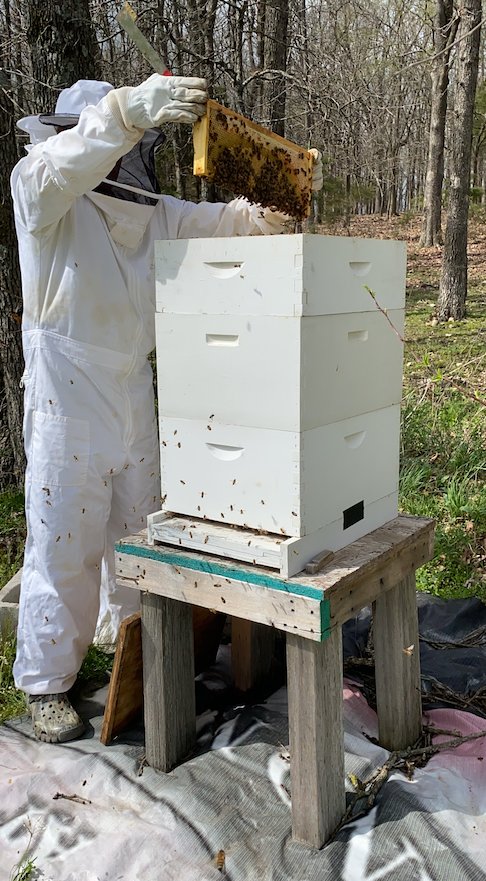 The bees are calm and composed as he removes a frame from the nuc to display the girls hard work. 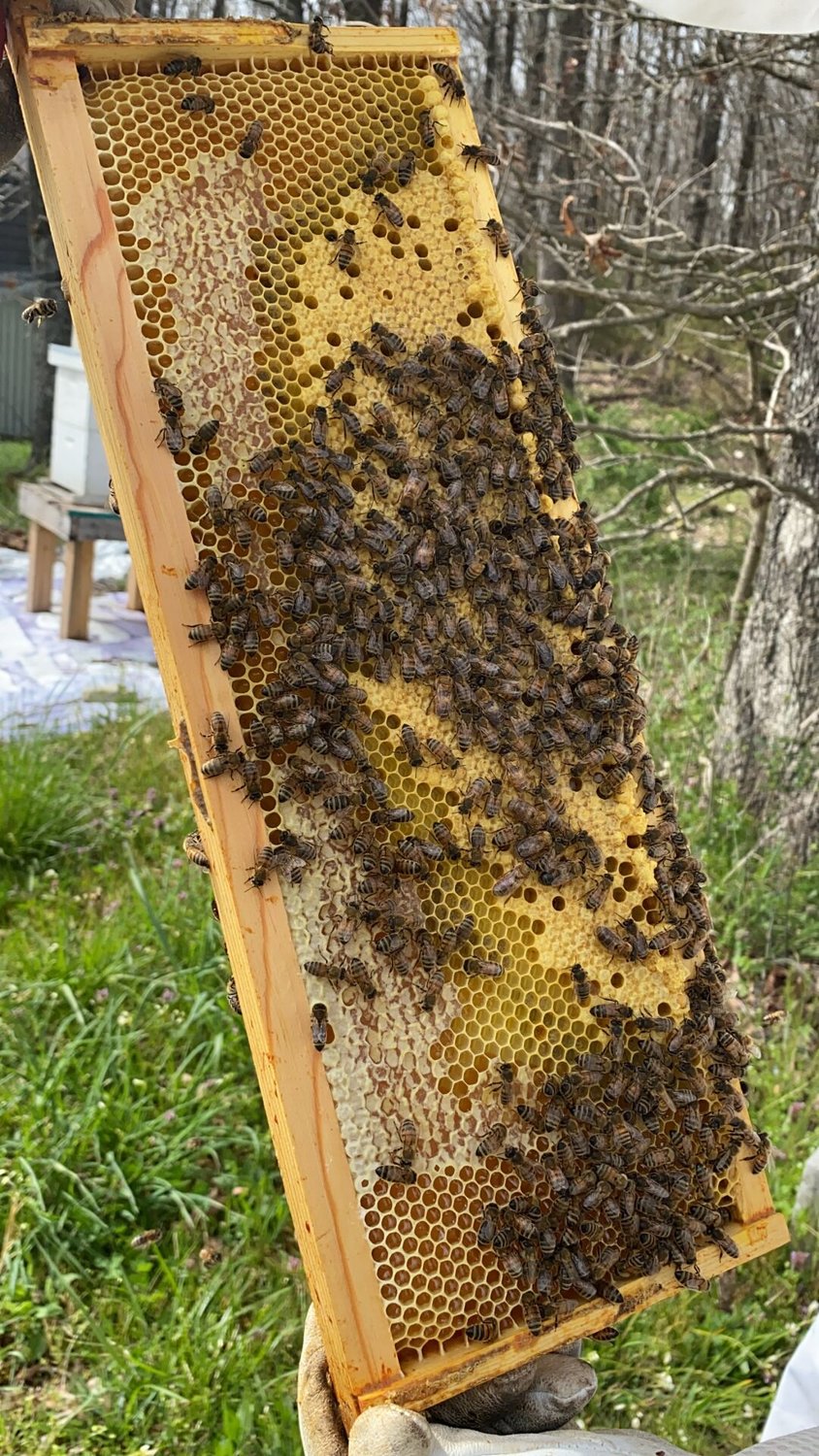 Pictured are octagon shaped honeycomb, which hold more honey than a regular circle would. Bees are fascinating, intelligent creatures who have perfected the most efficient way of producing liquid gold.

Previous Next
Posted Thursday, April 15, 2021 6:00 am
By Shelby Atkison shelbya@marshfieldmail.com

Terry Wayne Hardy has been beekeeping for two years now. He said he’s always been mesmerized by he decline in the number of bees despite how vital they are to our survival. About a third of our food is produced by their pollination.

“Growing up I was like most folks and wanted to get into beekeeping and I thought about it for 10 years or so before I got my first batch of bees,” he explained. “Beekeeping is what the word says – bee keeping. They require a lot of care and you get out what you put into it. Find a mentor. Someone that can walk you through the steps of it, it works so much better if you’ve got someone you can sound off of. ”

For Hardy, it was a gentleman at his church who offered to help him get into the hobby. He found out right off the bat is that he’s allergic to bees.

“I swelled up quite a bit the first time,” he laughed. “When I got to urgent care they gave me a prescription for Epipens… but every time I get stung my body reacts less and less. Your body will fight it off and your allergies actually get better over time. It’s also done wonders for my arthritis.”

Hardy said the last few times he’s been stung hasn’t bothered him much at all, but joked it was kind of a bad way to find out you’re allergic to bees. Keepers have to be in the hive every 2-3 weeks, at least, to monitor changes. It’s important to check on the queen bee to ensure the bees stay at their nuc, treat for parasites such as mites and other environmental factors.

“I have had one hive die from mites because they had infiltrated my nuc and I had no idea they existed in our area,” he said. “The first hive that I lost I was out about $600, it can be expensive but also very rewarding.”

A nuc is what the bees live in. Each one contains a queen, drones workers, baby bees, nectar and honey.

Currently, Hardy has two hives behind his house and sells his honey to folks he knows.

“It goes really quick,” he smiled. “All I have to say is mention I have honey at work or at church and it’ll be gone by the end of the day.”

To those who have thought about beekeeping, he says spring is a great time to start. Hardy insists bees are a great hobby due to the rewarding feeling it gives keepers when they produce a successful hive, as well as all of the things you learn while keeping.

Hardy has learned the inner workings of the hive and how the bees interact throughout the seasons. He explained that a drones only purpose is to mate with the queen, which happens once before it dies.

“A queen bee is really incredible – she can lay up to 1,200 eggs a day which could last her whole life,” he explained. “And they live longest out of all the bees in the hive. A queen will live in a colony for up to three years before they die and you have to replace her.”

According to Hardy, a honeybee’s lifespan is about 28 days and she will produce about 1/12 of a teaspoon of honey in that time. It takes a lot of bees to sustain a healthy hive.

“I’ve had 100,000 bees come through here in the last year and I’m down to one hive,” he said. “One thing we don’t do around here is spray pesticides. We don’t kill weeds either. All of our honey around here is clover honey… real light colored. So it really bugs me when people cut down timber or spray pesticides because my bees could bring em back to my hive and it contaminates the product or kills the bees.”

With spring warming up, it’s getting closer and closer to ‘swarm season.’ Every year hundreds of folks in the Ozarks deal with swarms of honeybees popping up in unexpected places. The thing to remember is that there are keepers everywhere who would love to save the bees.

“Don’t call exterminators. Call a beekeeper,” Hardy said. “I’ve rescued swarms and it’s not much of a challenge for keepers. You physically just scoop them and get them in the box, once you get the queen it’s like a magnet.”

Those who are interested in becoming a beekeeper are encouraged to start sooner rather than later in the year and find a seasoned mentor. The first year is the hardest, according to Hardy. Keepers must check on them often and can’t harvest honey from them the first year because they need 50-60 lbs to get them through their first winter.

“If you take too much off of them or take it too late in the year, they can’t replenish it and you risk losing your hive,” he said. “Go ahead and bite the bullet – give it a try. [Beekeeping] is so important because they’re so fragile and such a necessity.”

Hardy said those who have questions about beekeeping or who are interested in organizing a club can contact him on Facebook. While there’s not a beekeeping club in Webster County at the moment, Hardy would support the formation of a new one.

“Since there’s not a large mentor program in our area, I recommend if you’re on Facebook to join groups like Ozarks Beekeepers,” he added. “That’s what I’ve done and it’s a great community of people with common goals. I would love for there to be a club local to Marshfield or Webster County again… Feel free to contact me because we do need to get a bee club together again.”