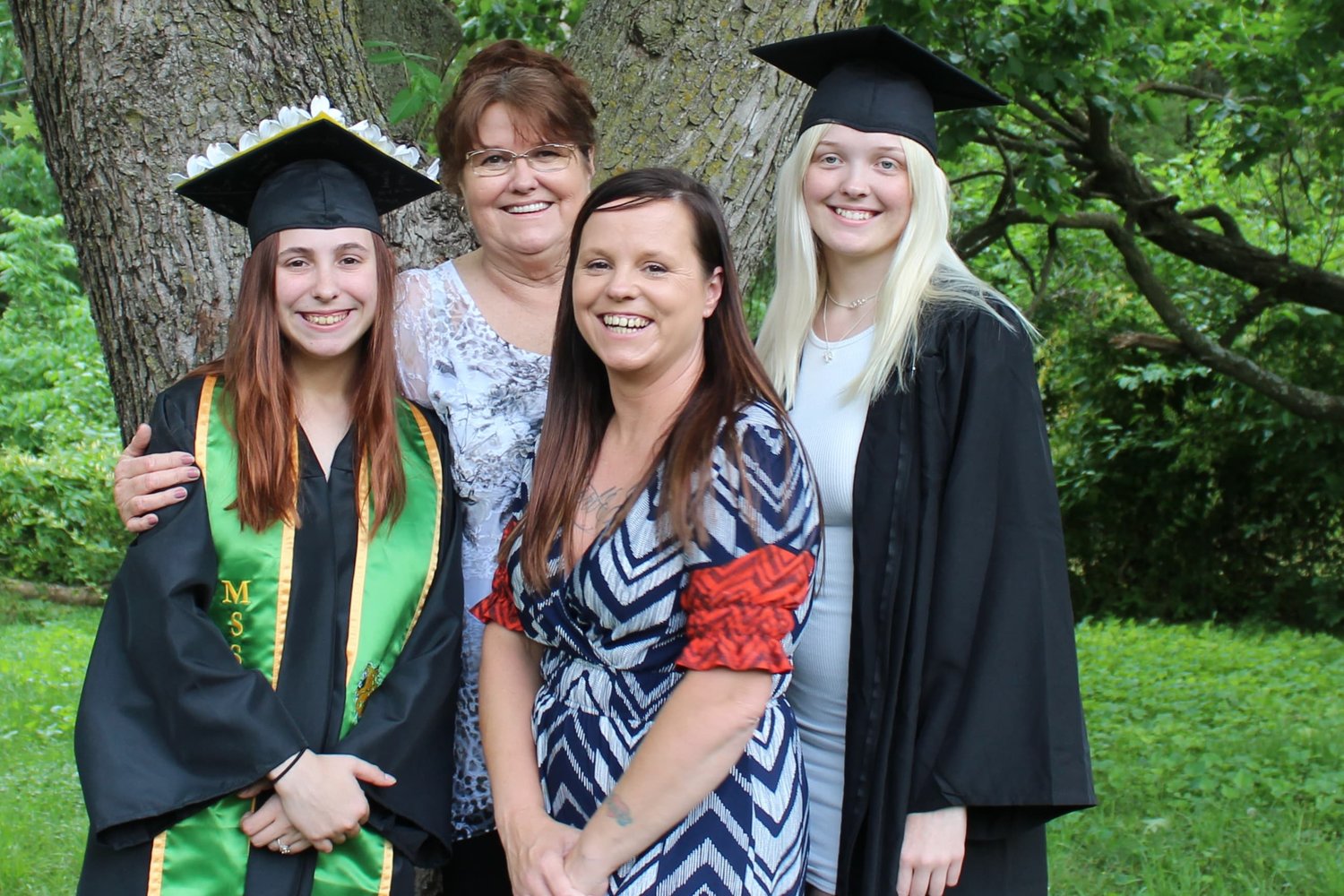 (Left to right) Katie Tanksley, Ruth Phelps, Amanda Brake and Lillie Tanksley have a lot to celebrate. Both Brake’s daughters celebrate their graduations from high school and college. Brake herself celebrates over four years of sobriety.
Posted Monday, May 30, 2022 12:11 pm
By Alyssa Andrews alyssaa@marshfieldmail.com

May welcomes the 30th anniversary of National Drug Court Month; a month-long celebration recognizing the lifesaving work, education and success found throughout the program. More than 150,000 individuals battling addiction have received lifesaving treatment from Drug Court, including folks here in Webster County.

The program is not new to our area, in fact almost 20 years ago, Judge Ken Thompson, Gail Barnekow, Dr. Ward Lawson, Brad Stocker, and other forward-thinking citizens helped open the doors of the Webster County Drug Court.

Doors Amanda Brake has walked through countless times during her battle with addiction.

“From the time I was 18, a boyfriend of mine introduced me into meth… from then on it was just every now and then,” explained Brake. “I’d use for several months and end up committing crime after crime. It’d be three to five months, maybe, and I’d end up back in jail every time. They sent me to prison four times, county jail countless times. This last time, I actually escaped jail.”

In 2018, Brake’s nephew had been arrested and was in need of money. With the desire to help him, and a warrant out for her arrest, Brake turned her self in. However, once dressed out in the jail’s jumpsuit she proceeded to escape through the elevator’s doors at the Webster County Jail. Brake was apprehended two days later. Brake was facing the same “old” fate she always did, until both of her sisters joined her in jail on drug related charges.

That is when Brake made a plea to Webster County Prosecutor Ben Berkstresser to be accepted into Drug Court. The prosecuting attorney is generally referred to as the “gatekeeper” due to the fact they decide who gets an application to drug court. Berkstresser stated there were many factors that played a role in his decision.

“Amanda was a real tough sell to get into drug court because I'd known her since I became a practicing attorney in Marshfield. She went on a string of crimes that were very serious and showed just a general lack of remorse. When she escaped the jail, she had earned a 10-year sentence from the Department of Corrections,” explained Berkstresser. “ I was resolved. Her attorney was a public defender, by the name of Joe Porter and Joe begged for me to take an opportunity to speak to Amanda and so I did.”

Prior to meeting with Berkstresser, Brake had been in jail for several months. Brake emphasized that her sisters needed someone to be an example for them and insisted that she wanted to change.

“I listened to her and I thought I’d give her a chance, but she'll have to do the work. When she got into the system and started treatment, it was amazing,” shared Berkstresser. “She faced moments where things were real tough. She worked so hard and was diligent.”

Berkstresser described himself as a “cheerleader” as Brake successfully navigated through Drug Court.

“Amanda has just a charismatic personality. She is very likable and I thought if she can get through this, potentially, her sobriety could have a ripple effect in her life and spread out through lives of lots of people; her children, siblings, and friends,” said Berkstresser. “She has just a great impact on the whole community. I gave her a chance, which I didn't want to do, but I did. After that, I became just a little bit of a cheerleader. She's certainly somebody I'm very proud of because it would have been easy to take the prison sentence.”

“It has saved my life. All credit due goes to drug court,” said Brake. “Drug court is an intense program. If people are looking for the easy way out better just go to prison because drug court is not it. I've been to prison, I've done that time and it is a cakewalk compared to drug court.”

“They expect a lot and if you're in that program, it's because they see something in you and they believe in you,” smiled Brake. “So, after 18 months I completed it.  A lot of others don't complete it in 18 months, but I did. I went in there. I told them I was ready and I meant business. I put in 100% and just did everything they asked me to do… and I found solutions to have a more successful life, not only while you're in drug court, but after.”

Now 39, over four years have passed since Brake’s successful completion of Drug Court. Brake currently works as a Certified Nurse Assistant in a nursing facility near Buffalo, MO, but has plans to move back to Marshfield in the near future. The reason: she wants to vote in Webster County.

“I am fixing to move back and the reason is gonna sound crazy,” laughed Brake. “I love my Webster County judges and prosecutors. I love all of them and so I want to vote. I've never been able to vote. When you're a felon, you can't do that. I recently got off felony probation for good, so I can vote now. I’m moving back here because I found out you have to register in the town you live in. I don't want to vote for people in Dallas County. I want to come back here to my hometown and support the very same people who supported me.”

treatment courts are so critical in the effort to address addiction and related crime.