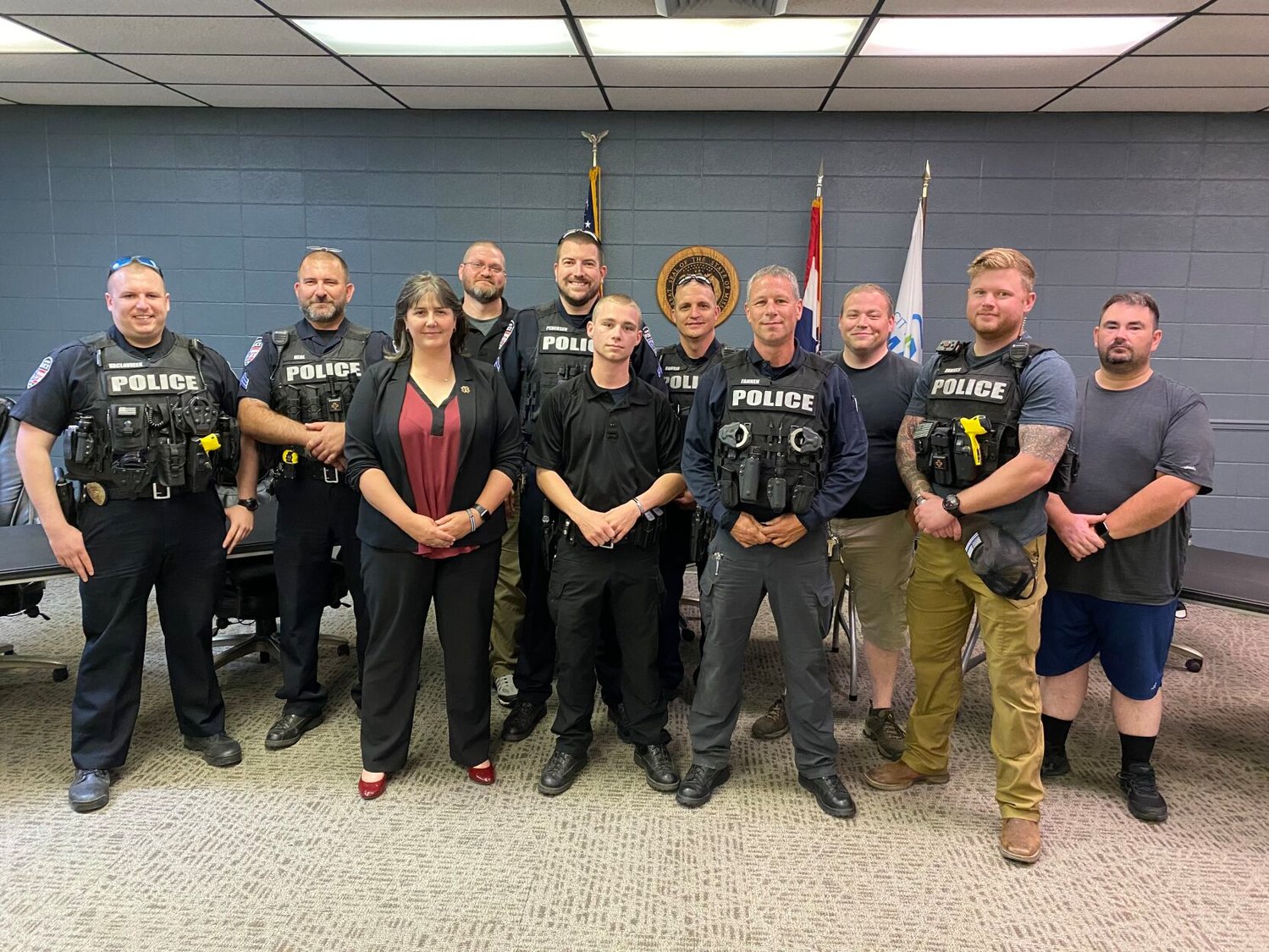 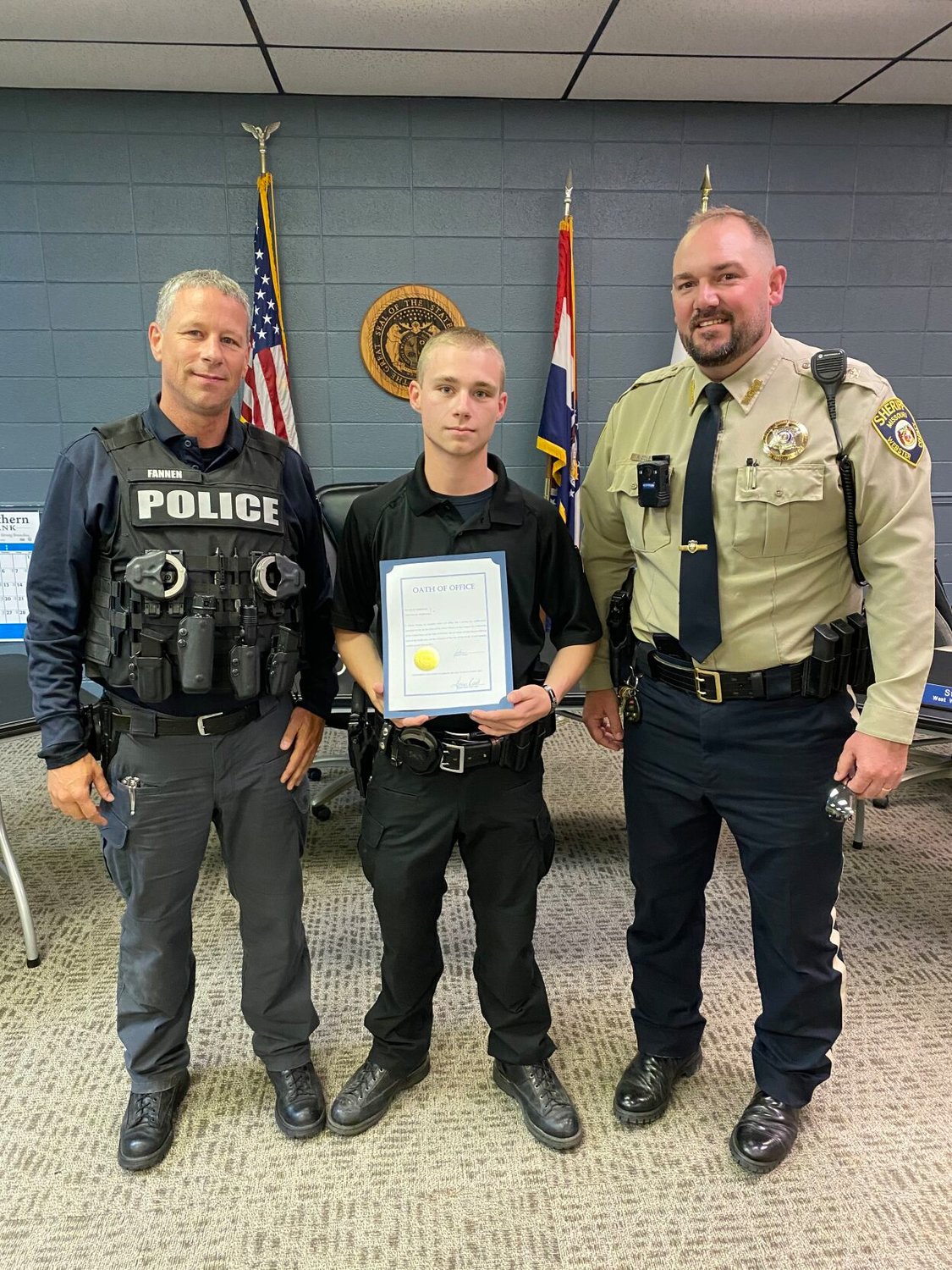 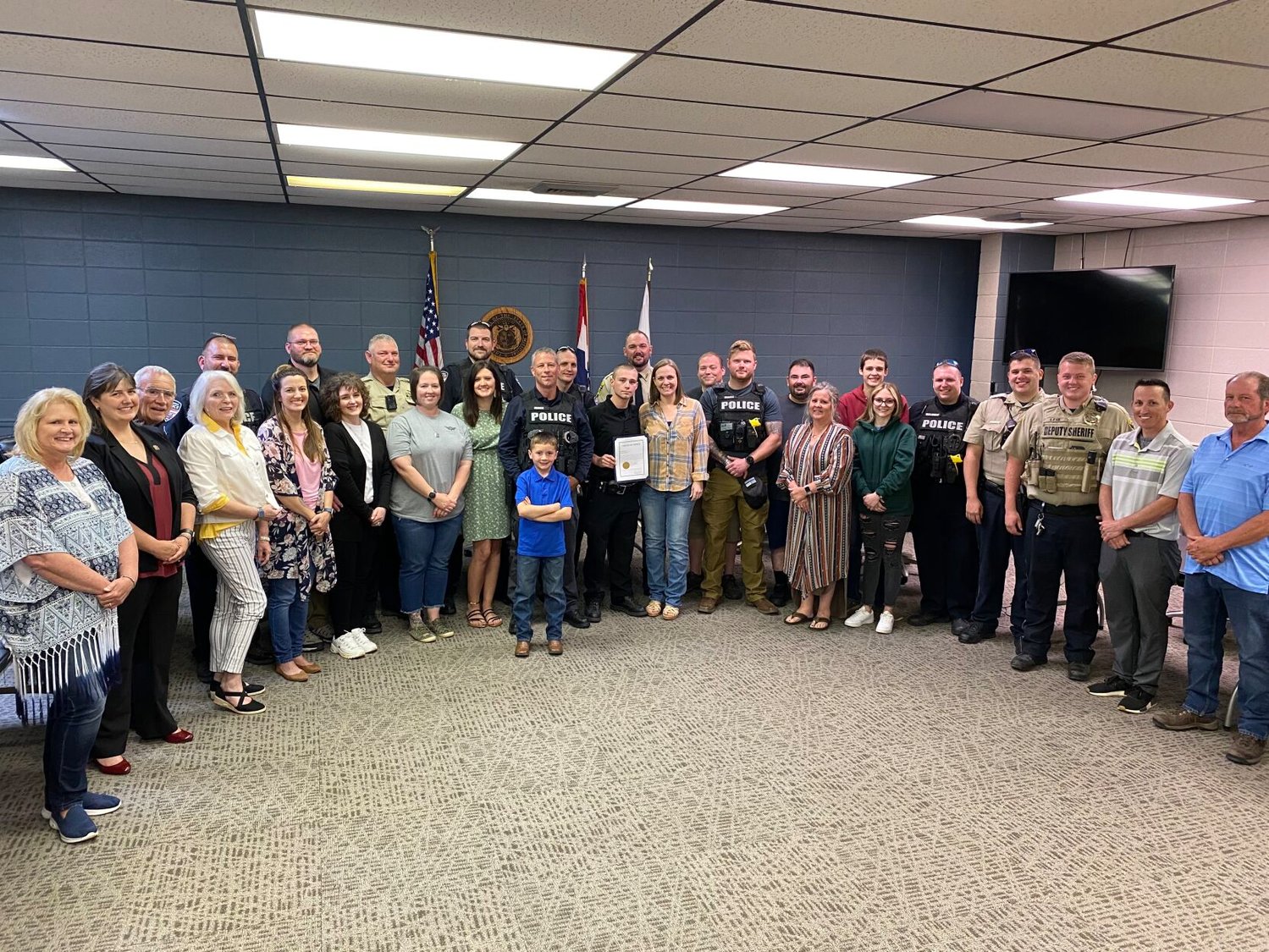 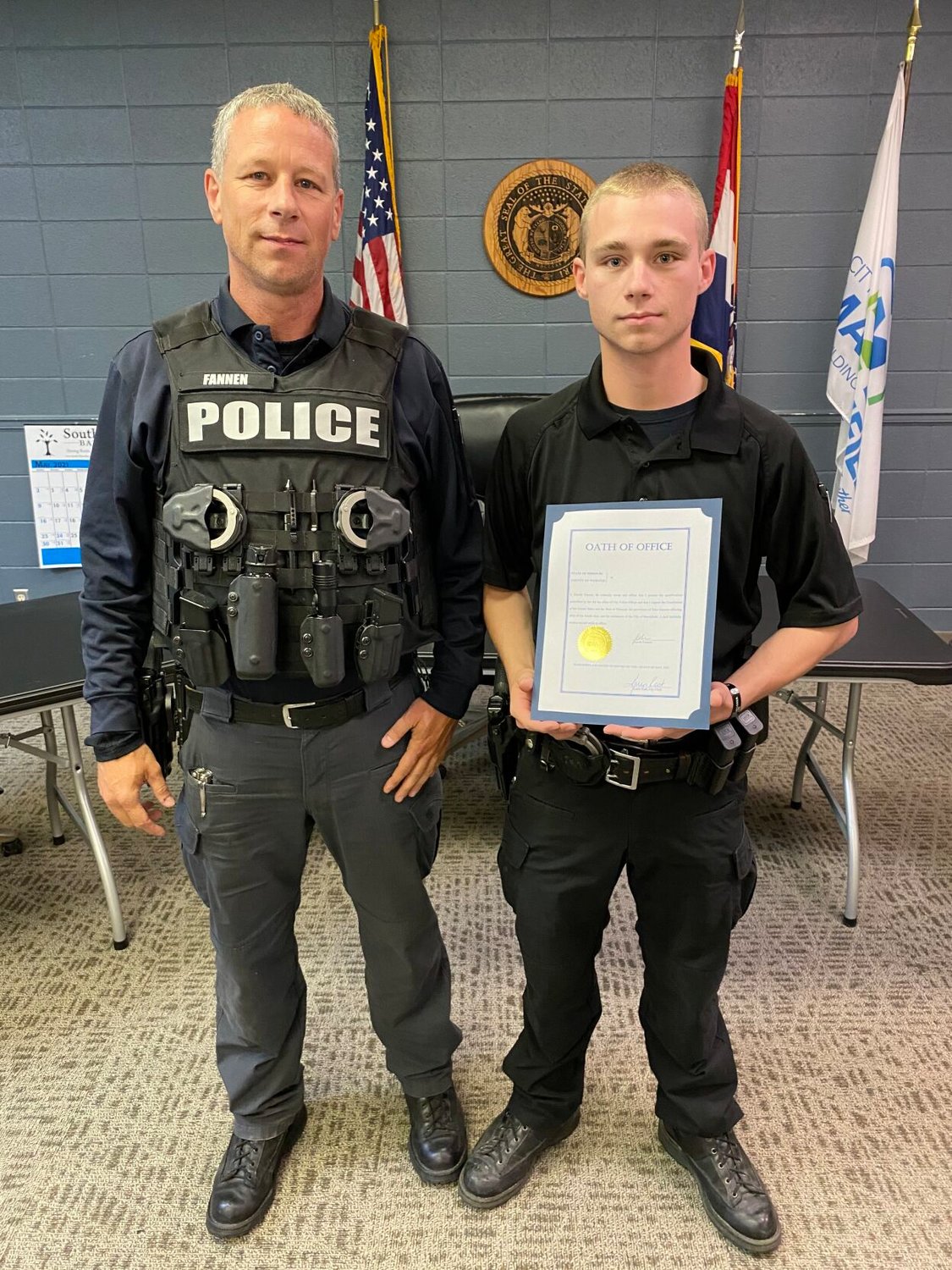 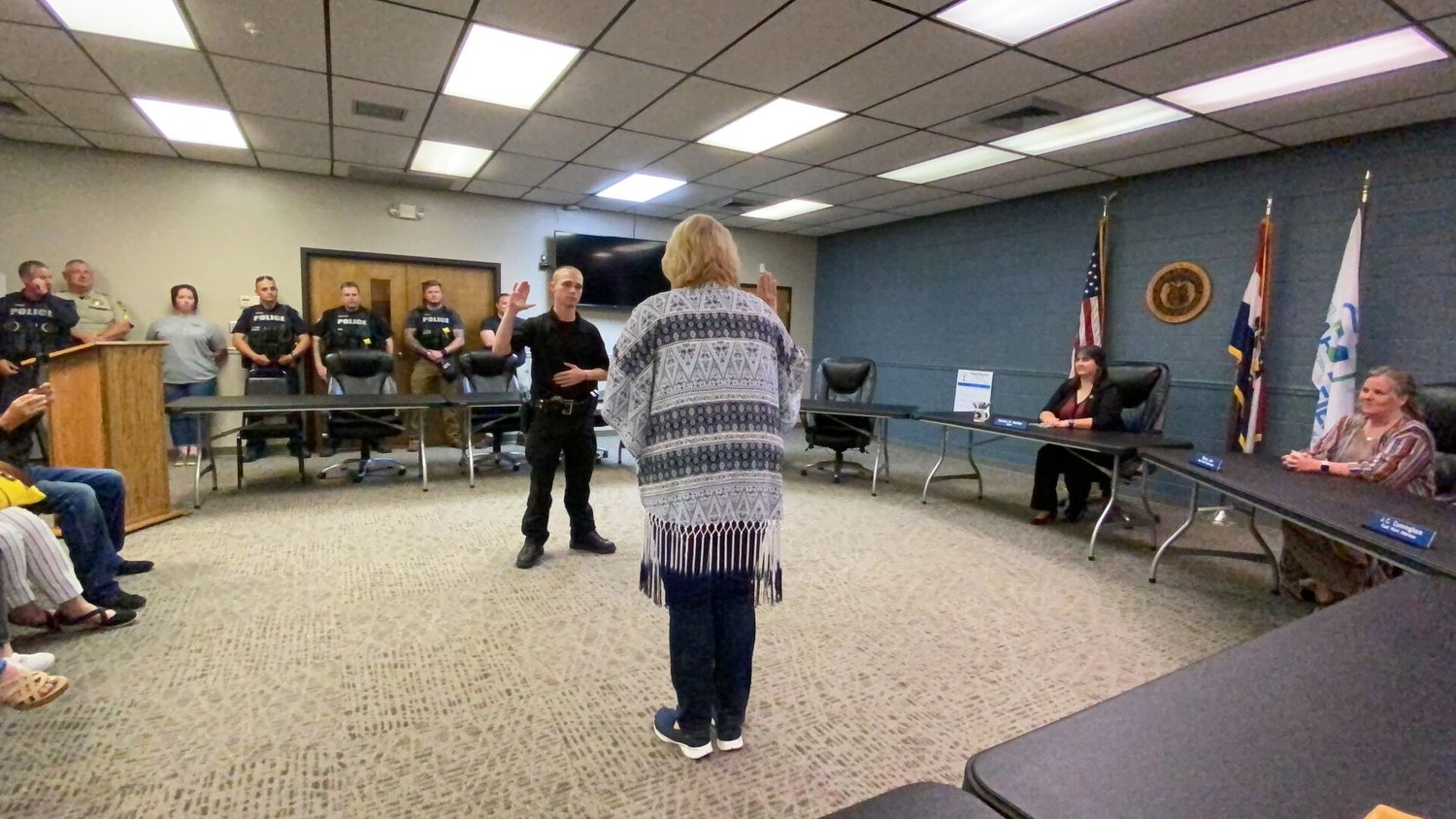 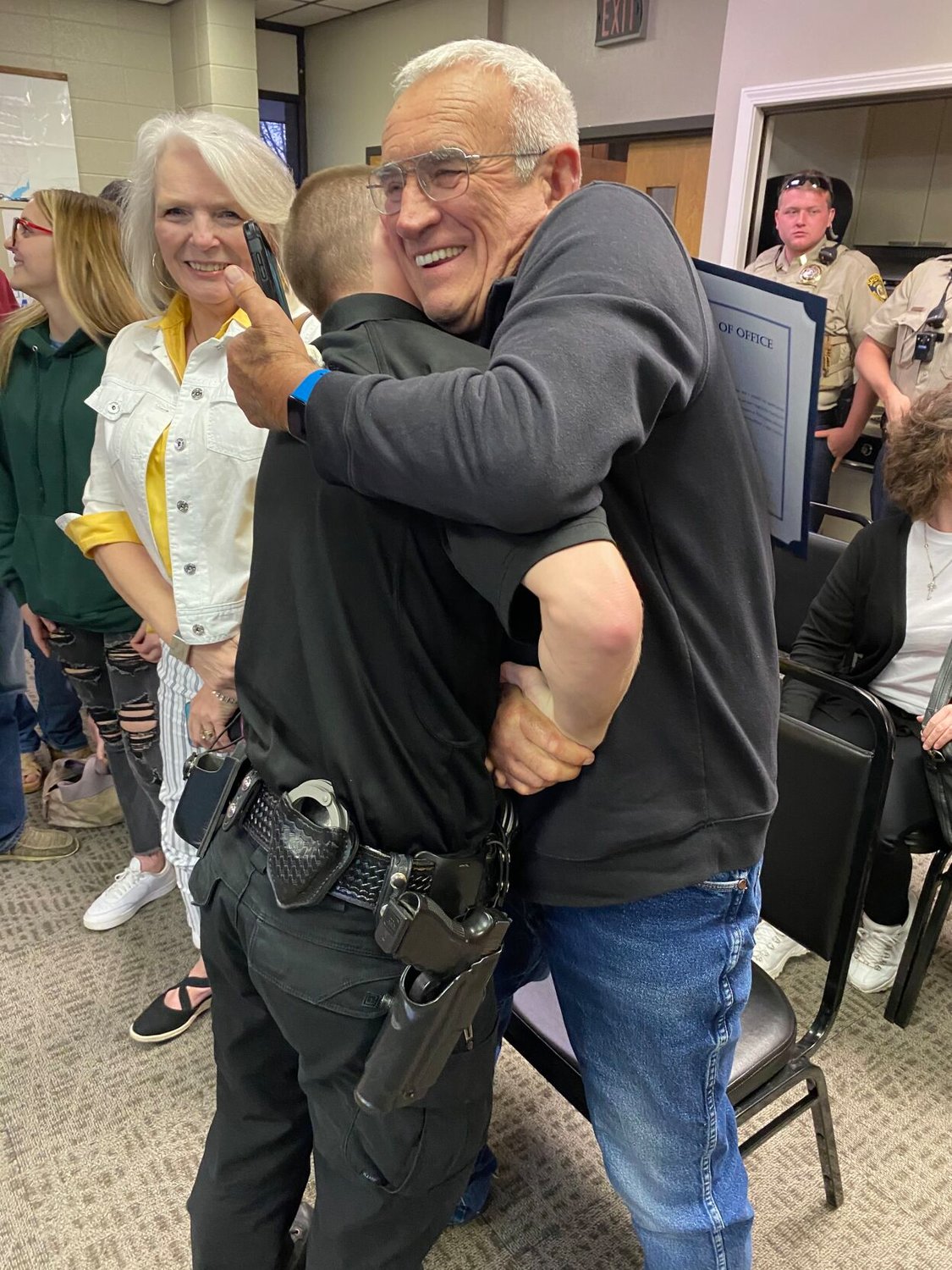 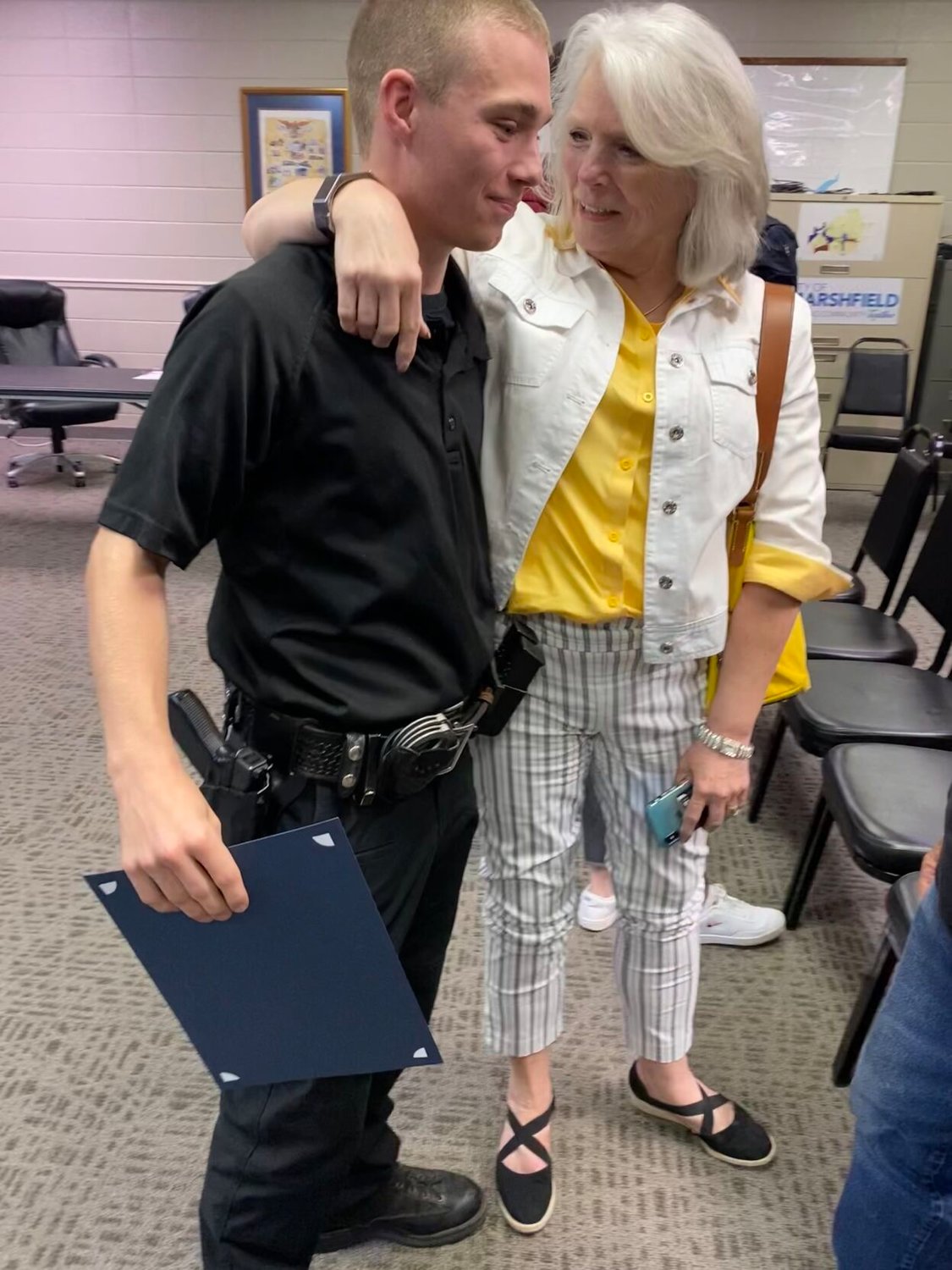 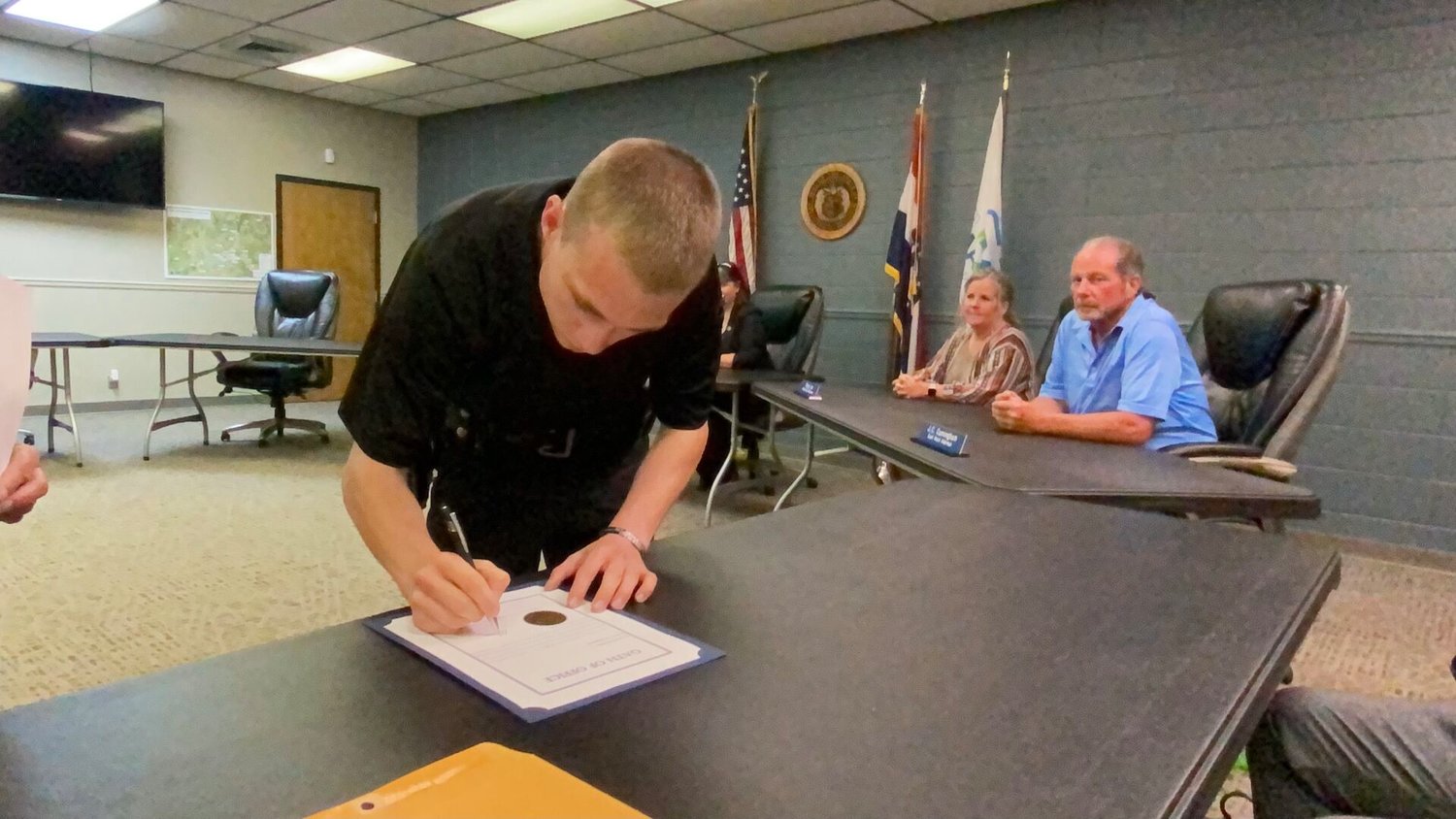 Garrett Fannen
Previous Next
Posted Wednesday, May 19, 2021 5:30 am
By Shelby Atkison shelbya@marshfieldmail.com

Garrett Fannen was sworn in as the City of Marshfield’s 12th police officer on Thursday, May 13. While an explosion kept the ranks occupied for the majority of the evening, dozens gathered at City Hall to witness a new Fannen take the oath.

Garret is one of three sons of Marshfield Police Chief Doug Fannen. When asked if his father impacted his decision to enter law enforcement he replied, “Absolutely. That’s what I modeled myself after.”

Since he had a good model, Fannen said it was easy for him to get on the right track and stay there. At 18 years old, Garrett began working in the Webster County Jail for Sheriff Roye Cole. He graduated from Seymour High School in 2018 and got right to work, first learning the ropes at the courthouse and then at the new Justice Center.

“When I got out of high school I knew I wanted to be a police officer, and I knew the jail was the best way to get acquainted with people, get to know the system and the officers,” Garrett explained. “To me, that was the no-brainer way to start.”

“A lot my family is military or law enforcement it’s a scary time for anybody to enter law enforcement,” added Chief Doug Fannen. “We’re all doing a job right now that nobody wants to due from lack of support, fear of being sued, officer death rates have just skyrocketed… this community is not like that but all across the country, nobody wants to seek out a career as a police officer. So when you see someone stand up and put a uniform on in these times, it’s awesome.”

Mayor Natalie McNish said the growth of Marshfield relies on the success of all departments, including our police department. With the hiring of Fannen as the 12th officer, there has been one employee hired per office or department at the city to help the city “continue to provide the services that the city expects at a higher level of excellence than we were already doing.” Since the newest applicant being related to the Chief of Police, the city had to take a different approach for the hiring process.

“This was not a typical process for placement because of the applicant pool containing a relative,” she added. “We had to remove the most knowledgeable person and best judge of character we have from the process. I’m incredibly proud of everyone who participated in the interview process, everybody did a remarkable job… after all was said and done Garret was the clear and obvious best choice for Marshfield and we are honored to have him join the ranks… he’s only going to add to that level of excellence as we move forward.”

With that, City Clerk Karen Rost read the Oath of Office and Fannen was sworn in as the City of Marshfield’s 12th officer and had his first day Monday, May 17.

“What a blessing it is to see him come on with the MPD,” said Chief Fannen. “This is a very unique community.”