Justin David fiddles for the crowd at the 2021 Pioneer Day program. 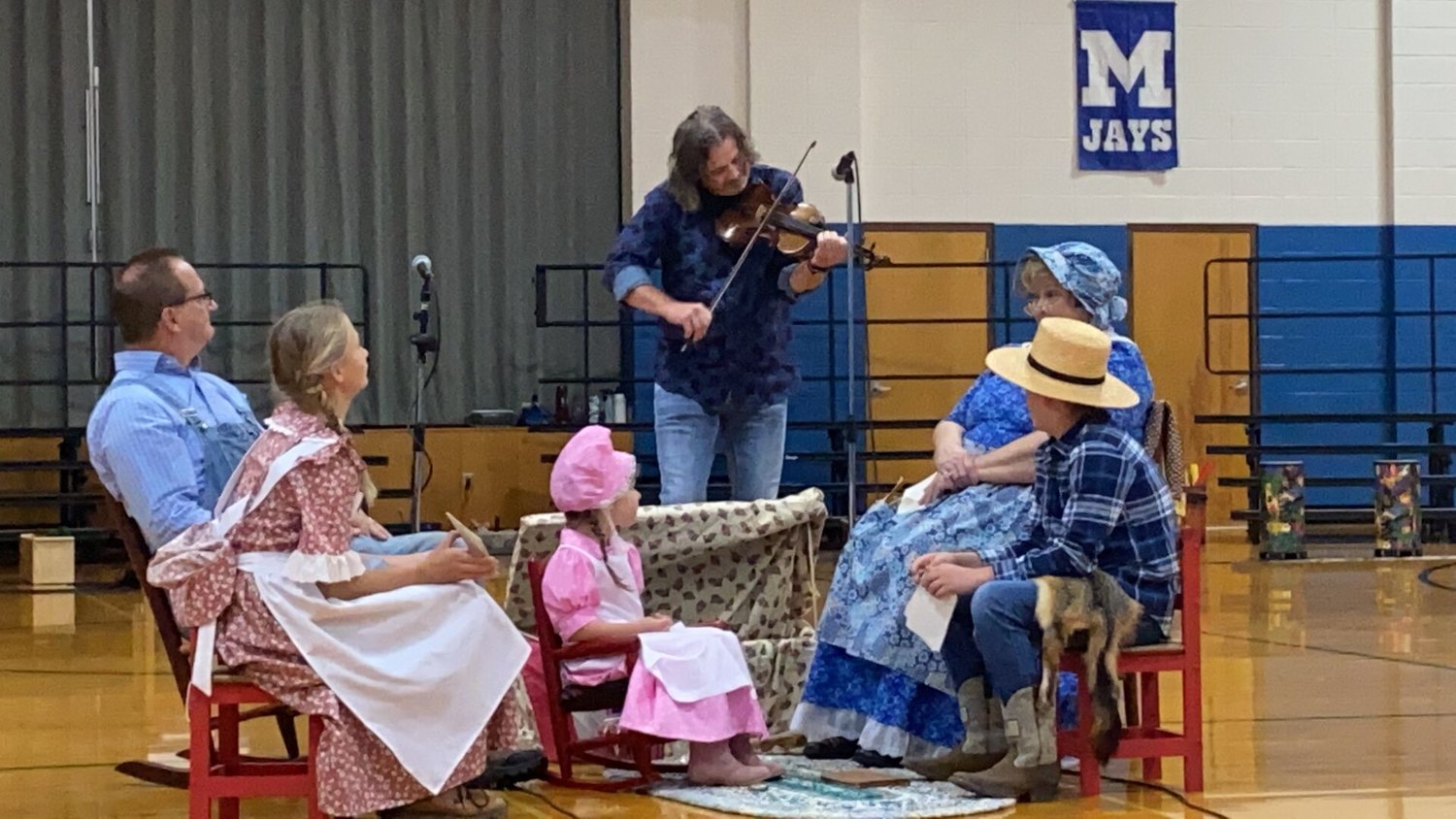 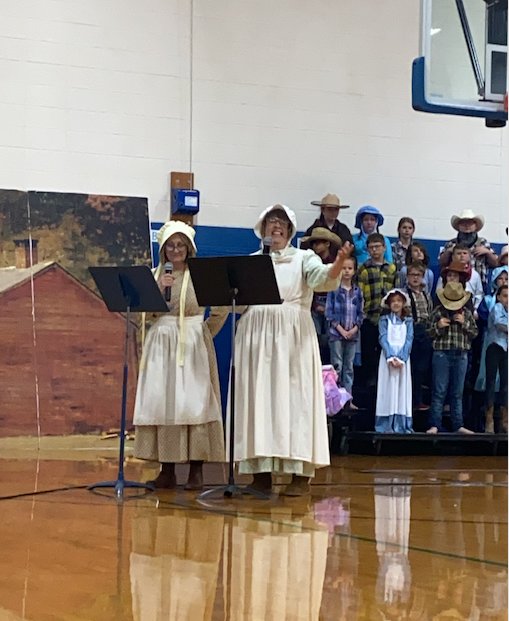 Deborah Wilkerson (left) and Marianne Baker (right) recall many memories spanning 30 years of Pioneer Day celebrations. The two women pioneered the program in May of 1991.

Previous Next
Posted Wednesday, May 19, 2021 4:00 am
By Shelby Atkison shelbya@marshfieldmail.com

“The first Pioneer Day was planned and held by two teachers on a sunny Sunday in May at the end of the school year in 1991. Fourth grade was still at Hubble Elementary at the time,” said Marianne Baker.

“We were exhausted pioneers after that first celebration,” Deborah Wilkerson laughed. “But we knew we’d do it again and the next year… and we convinced the other fourth grade teachers to join us.”

“Then in 2001 we moved to the new school, Shook Elementary and continued the Pioneer Day celebrations,” said Baker.

Each year, students show up on Pioneer Day dressed as indigenous people, cowboys, cowgirls and pioneers. They head to their classrooms to cook and consume their own pioneer-style breakfast before heading to the gymnasium for the program portion of the day. Program founders, Deborah Wilkerson and Marianne Baker opened this year’s show by traveling through Pioneer Day history – a tradition carried on through thirty years.

“The first year, we invited Justin Bertoldie, a high school junior to play his fiddle for the kids to dance to,” recalled Wilkerson.

Baker then chimed, “Who knew that he would later move to Nashville, change his name to Justin David and become famous?”

Justin was in attendance for the anniversary event with his daughter and fiddled for the crowd, similar to his Pioneer Day debut in 1991. The children partake in singing a series of pioneer songs, including the Missouri Waltz, which was led this year by the original music instructor for the program, Beth Burch.

“One of the things I hear every year when our graduates think back and reflect not their school experience... they’re asked what is the highlight? This right here is one of the things that typically gets mentioned,” said Shook Principal Heather Sample. “That says it all in a nutshell right there. It is such a pivotal part of our history and part of the beautiful experience for Pioneer Day is that it’s rooted right here and was created by our teachers themselves. ”

This year’s program was the fourth for Samples to help organize, who has been Shook’s Principal for five years now. While COVID kept the school from celebrating Pioneer Day last year, she said she was excited to continue the tradition in 2021. According to Samples, she was actually unaware fo the event until her first day visiting the school, the year before she started.

“I didn’t know about this beautiful tradition in in marshfield until then,” she said. “That was my very first day to come to shook and I was absolutely amazed by the community support, the outpouring of love and the fantastic educational experience of the whole event.”

As Marianne Baker and Deborah Wilkerson organized the Pioneer Day events through the years, they were able to get the entire school to buy in, with participation from every fourth grade teacher, as well as music, art and gym instructors.

“When they decided to do a program along with their Missouri unit, these two teachers truly blessed these kids. Having my own kids go through it – it’s one of the best memories that they have of fourth grade,” explained long-time Marshfield gym teacher, square dance instructor and Coach James McAnarney. McAnarney has been involved for 25 years and 24 Pioneer Days, due to COVID’s cancellation of last year.

“It really helps drive home Missouri history and they remember it a lot more through this experience, so I think it’s just awesome.”