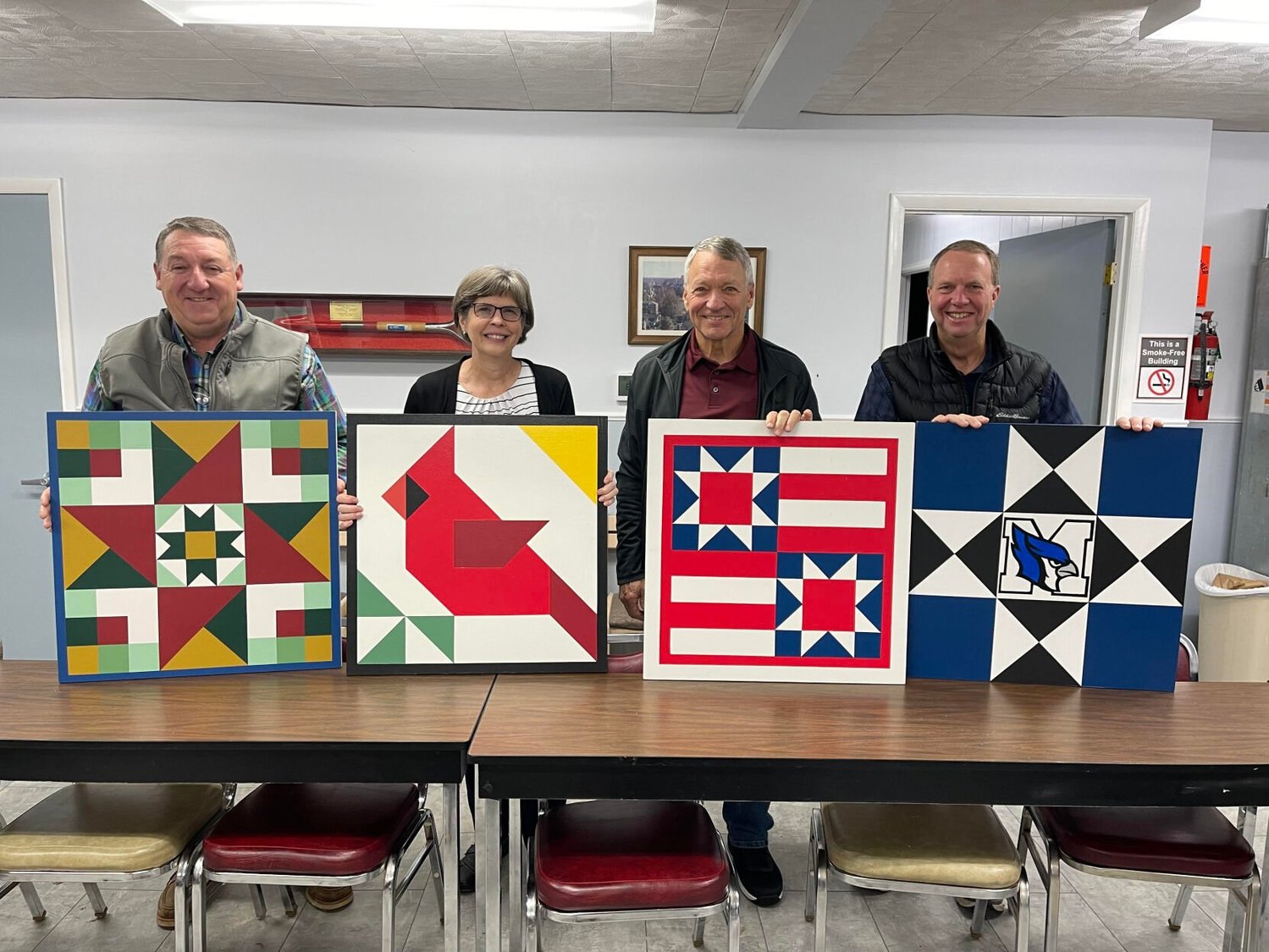 (Left to right) Kyle Whittaker, Janet Wutke, Mike Wutke and Alan Thomas show off their barn quilts. Janet, who started making barn quilts for her church, decided that she wanted to donate them to the Grow Education Marshfield fundraising efforts. The first 50 people who donate $200 to the fund will receive a barn quilt as a thank you gift. “I started teaching the barn quilt classes because there were some ladies that said ‘I wanna do this’,” laughed Whittaker. “…we want to engage people in what we do here…ultimately that’s what we are about here-to improve the lives of people that live in this county.”
Posted Wednesday, December 21, 2022 2:00 am
By Amber Brand amberb@marshfieldmail.com

It’s no secret that the teacher shortage is one worth taking note of; the number of positions open in the local school districts and the number of teachers applying to fill those positions has tipped in the last few years.

“In 2006 the (Marshfield School) district had 4 elementary openings and 313 applications. In 2020 the district had 5 elementary openings and 27 applicants,” explained Mike Henry, current Superintendent of Marshfield Schools. “The information that we are seeing on news stories about teacher shortages-…sometimes we hear those news stories and it’s on the coast or it’s somewhere else, in big cities-this is one that we are definitely seeing here.”

“Over the last few years there have been fewer and fewer educators coming out of college,” added Dr. Mike Wutke, retired Superintendent of Marshfield Schools. “With fewer (educators) available, districts are seeing the teacher shortage; not just in math and science like they used to, but even elementary education.”

When the teacher shortage hit an all time high, the state took action to try and come up with ideas to try and help districts with the shortage. One of those ideas money for schools in the form of a grant called “Grow Your Own”. The money was to be ear marked for one of two purposes: seed money for starting a grow your own program or teacher retention.

“Janet and I had been thinking about a grow your own educators scholarship to try and encourage teachers in our local district to come back and teach here,” reflected Wutke. “…and I approached him (Mike Henry) about anything we could do…he said it would fit in perfectly with what they were doing.”

“We were able to use some of that money (the Grow Your Own grant money) because it absolutely completely aligned with what the Wutke’s vision was for the scholarship,” shared Mr. Henry.

Together Wutke and his wife Janet got to work. The GEM (Grow Educators Marshfield) scholarship is set up so that each year two students who are going to college for education will receive a $500 scholarship each. Students will continue to receive $500 from the scholarship until they graduate. If they return to the district to teach upon graduation, they will then receive an additional $1,000 gift for coming back. The first two scholarships were given last year to Maguire Wilson and Maggie Melvin.

“The exciting thing to me about this program is that it’s not only a scholarship helping our graduates, but it’s encouraging them to come back,” added Mr. Henry. “Our belief…people are mostly to stay with what they know. Those people that came through and experienced education from the student side here are coming back and wanting to give back-those are people that are likely to spend careers in the school.”

“Most educators end up teaching fairly close to home…so why not, within your own district, promote some of your best and brightest kids that have a lot of potential to be teachers…and try to encourage them to come back home and teach,” explained Wutke. “Even if they don’t end up coming home, if you’ve encouraged them to be a teacher, they’re helping.”

With the seed money being only enough to cover the scholarship for the first few years, Mike and Janet Wutke knew they had to come up with a way to fundraise and grow the scholarship fund to a self sustaining amount. Putting their heads together, they came up with an idea.

Janet Wutke, who gained an interested over the last few years to help her church with a craft fair, started to make 2x2 barn quilts. She sold the barn quilts to benefit her church.

“She was having fun with it,” smiled Wutke. “We got to thinking, well people aren’t knocking down our doors wanting to donate-because they don’t know the need or much about it, so we thought maybe this would be a way to bring it to some attention.”

The couple set up a meeting with Kyle Whittaker, County Engagement Specialist with the MU extension Office and retired MHS educator, to see if there was a way they could work together.

“I have taught several barn quilt classes. I had been considering starting a trail (a barn quilt trail) before the Grow Education Marshfield opportunity came,” reflected Whittaker. “We thought it might be a good time to partner and make something happen.”

The idea: if an individual or business makes a donation to the Grow Educator Marshfield Fundraiser in the amount of $200 or more, they would receive the gift of a barn quilt to hang at their property or business.

Over the years as Whittaker has taught barn quilt classes; he grew an idea of his own: to create a barn quilt trail in Webster County.

“There are a few barn quilt trails established in Missouri,” explained Whittaker. “Really it’s a win-win situation-when they approached me about this Grow Educators Marshfield. The trail itself could be considered an agro-tourism type thing.”

The goal is that trail maps would be available for visitors to pickup and then travel to each location to view the quilt. Anyone who has a barn quilt up could share information about their quilt’s location through the QR code. If it’s hanging at a business the business could include information about when it was established, what it sells and more. If it’s hanging on a barn on a homestead or personal property, the family could share history about the farm or property.

In addition, anyone who’s barn quilt came from making a donation to the scholarship fund would include a visual marker or indicator that they are a sponsor/donor.

While the vision for barn quilt trail project is still at ground level, Whittaker is excited to have the opportunity to partner with the scholarship fundraising team to see both of their goals come to fruition.

“The challenge for me is the technology side of it,” explained Whittaker.

Janet is excited for the partnership and is donating each quilt she creates to the project. The hope is that she gets too busy to keep up.

“We have just started trying to raise funds. We haven’t contacted a lot of people or anything like that,” explained Wutke. “We are just trying to bring awareness,” added Janet.

Currently there are five barn quilts out into the community and the team can’t wait to see more.

With the set up of the scholarship being a "rolling scholarship" opportunity while recipients are in school, the fundraising goals are big.

The scholarship is set up through the Marshfield Schools Foundation and will earn interest as the money grows, which will eventually allow the fund to self fund itself.

In addition to making donations through the Marshfield Schools Foundation website by selecting GEM on the donation drop down menu. Additionally, interested donors can make donations via check or cash. For more information you can contact Janet Wutke at 417-300-0582 or Mike Wutke at 417-880-7167.

The Webster County Extension office will be hosting more barn quilt classes in 2023, the cost for those classes is only $45. For more information contact the extension office.

Both groups are looking for interested folks to join their fundraising and barn quilt trail teams. Currently the fundraising committee includes: Mike and Janet Wutke and Alan Thomas, also a retired superintendent of Marshfield Schools.