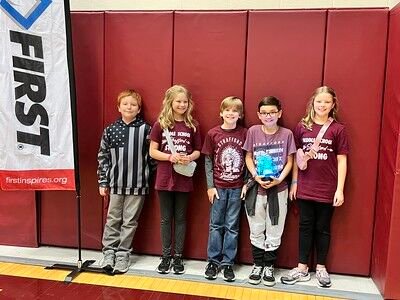 Things geared up at the Strafford High School last Saturday, Nov 12, as FIRST was back for another season of robots, problem-solving, and, most importantly, teamwork. 21 teams participated, ranging from Camdenton, Mountain Grove, and Strafford. Teams were comprised of various grades and ages, ranging from fourth grade to seniors in high school.

This year's challenge was "SUPERPOWERED", a fun interactive way to ask students how they would solve the energy crisis. For the younger teams, the task included building a LEGO bot and triggering a giant hand that reached over the table to the other teams, who also had a hand that would meet in the middle. An entertaining, yet subtle way to reinforce the idea of teamwork.

For the older groups, the challenge was a bit more in-depth and competitive as their bots, not built out of LEGOs, had the task of running around putting cups onto poles to complete circuits. Out of the 21 teams that participated in the SUPERPOWERED challenge, only four would advance to the next round that would take place on Dec 10.

"We loved seeing all the teams at Strafford High School this weekend. The teams are excited to share what they learned about robotics and the research they did around the energy theme." Laura Roth, Executive Director for FIRST in Missouri, shared, "We hope to have even more schools participate next year. Missouri's kids are amazing and the key to a bright future."