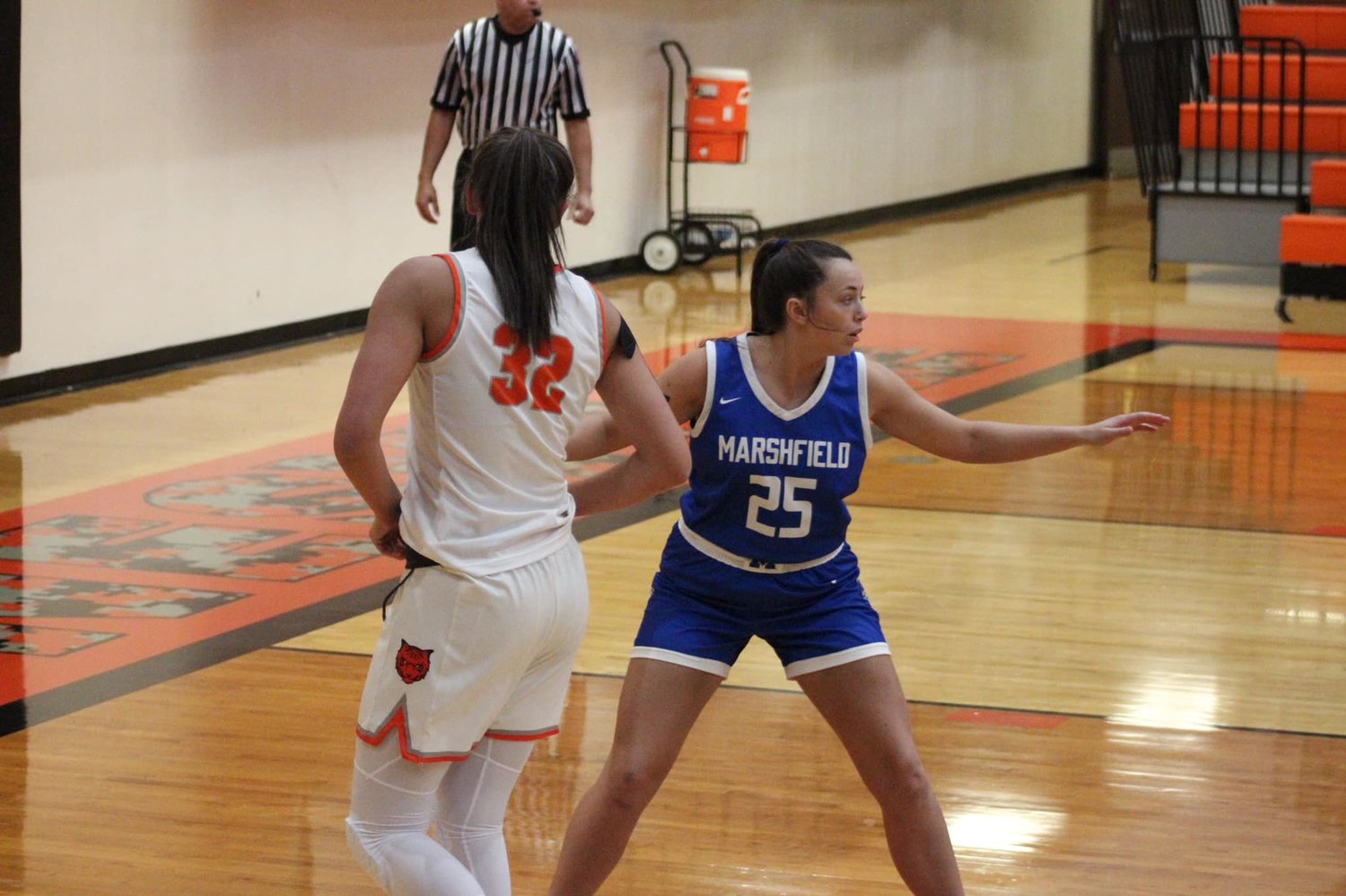 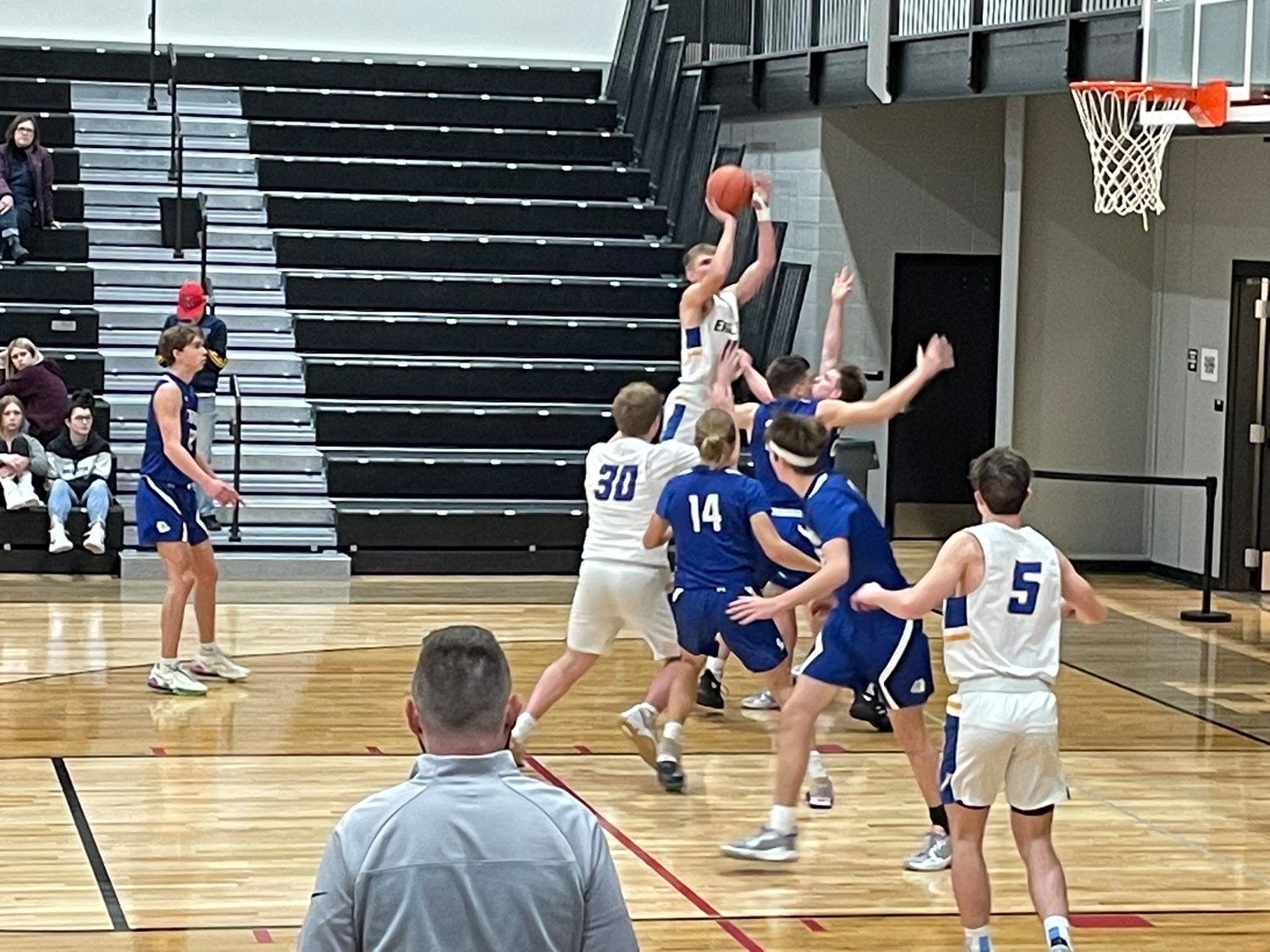 The Fordland Eagles have celebrated four straight wins, including a second place in the Huston tournament. Pictured is a 49-15 win over Cabool.
Photo contributed by Stephanie Vickers
Previous Next
Posted Wednesday, January 26, 2022 8:00 am
By Abigail Swanigan abigails@marshfieldmail.com

The Marshfield Blue Jays basketball team has a standing of 8-10 on the season. The Jays are currently competing in the Family Pharmacy Panther Classic. The first game of the tournament was played against Willow Spring where the Jays fell 40-48. The team will be taking on Hartville on the Marshfield Mail’s publication date, Jan. 25.

The Strafford Lady Indians basketball team has a head-turning record of 14-2 on the season. The team has just finished competing in the LR Lady Cat Classic where they went 2-1, losing against Rolla on Jan. 22 34-36. The team will travel to Republic on Jan. 27 to look to improve its record.

The Strafford Indians hold a record of 8-8 on the season. The team has been competing in the Conway Invitational which is set to conclude on Jan. 29. After the Invitational, the team has 6 more games left in the schedule until district play begins.

The Rogersville Lady Wildcats basketball team hold a record of 3-11 on the season. The team hosted then LR Lady Cat Classic where they went 1-2. The team has since then competed against Webb City and West Plains and will be taking the court again against Mt. Vernon on Jan. 31

According to MSHAA, the Wildcats have a season total of 3 wins, 4 losses. Competing against Marshfield on Jan. 18 the team lost 41-48. The Wildcats will be taking the court again on the Marshfield Mail’s publication deadline Jan. 25 against Mt. Vernon.

The fabulous five currently hold a winning record of 9-7. The team, composed of just five players, has continued to play together to produce wins for Niangua. The squad fell to Fordland on Jan. 18 with a score of 40-43. The next game versus Walnut Grove was postponed, leading the Lady Cardinals to take on Greenwood on the Mail’s publication deadline of Jan. 25.

The Cardinals are currently at a 6-10 record on the season. On Jan. 17 against Bills where they took a one point loss, 60-61. The Cardinals are now currently competing in the Conway Invitational which will end on Jan. 29. The team only has 5 more games in regular season play.

The Lady Bears are 2-7 on the season. The team took a 53-46 win against Greenfield on Jan. 20 and are now competing in the Mansfield Lady Lion Invitational and will compete in the tournament through Jan. 29.

Sitting at 5-14 on the season the Conway Bears just came from a 50-72 loss against Norwood on Jan. 21. The team is now hosting the Conway Invitational that will be concluded on Jan. 29, learn more in the Feb. 2nd edition of the Marshfield Mail.

The Fordland Lady Eagles basketball team are currently in a winning season with a record on 10-9. The team just competed in the Galena Lady Bear winter classic where they went 2-1 during the tournament. The team will take the court again on Jan. 25 against Plato.

The Eagles have a record on 9-10 on the season with 6 more games to go. The team just completed competing in the Huston Boys Basketball tournament where they went 2-1 and they also competed against Miller on Jan. 24 taking a 37-42 loss. The team will compete again on Feb. 1 against Miller.