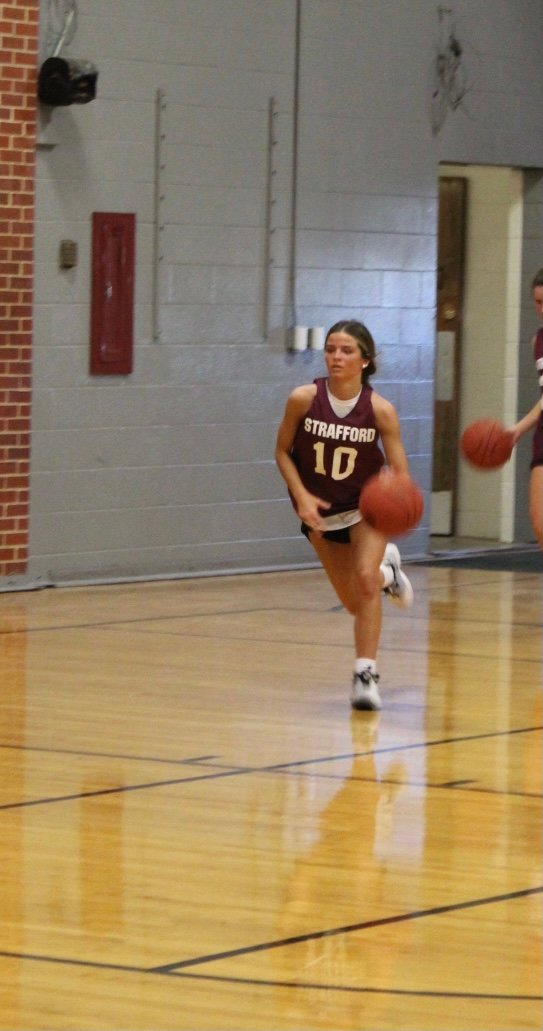 Coming off a 21-7 record last season and ending its season in the Final Four for the Class three state tournament, the Lady Indians are preparing for the new 2021-22 season. With only losing one senior last year the team has multiple returners as well as newcomers to the team.

“We are super excited for the upcoming season,” Coach Dustin Larsen mentioned. “We have a lot of returners this year. We are excited for what we have coming back and just having that experience from last year coming back. We will have four starters back which will be nice.”

The team begins the season at the Willard Basketball Classic on Dec. 1-4.

The Jays are heading into this season after ending the 2020-2021 season with a record of 16-11. The team ended its season last year in overtime at the district championships to Rolla.

“We have probably our four best players back this year from that team,” Adam Carpenter, head coach mentioned. “I am just excited to watch our guys and see how they have grown and developed. I feel like last year the only thing holding us back was the inexperience so I am excited to see the guys compete with the experience under their belt.”

The team will have the first season game Nov. 23 at Marshfield High School against Conway.

Ending last season with a 20-6 record, the Lady Jays have started practice for its 2021-22 season.

“Last year was a good season,” Katie Pritchard, head coach stated. “I thought that we had some pretty great senior leadership and some young kids that stepped in and were able to make an impact immediately. I think that really lead to a solid year for us. Bringing some of those younger kids back that now have to step into a leadership role will help us this year. We have a lot a kids who didn’t get a lot of varsity time last year that put in the work over the summer and will get to see that this year.”

The Lady Jays will open the season at Clever High School on Nov. 22

Last year the Conway Bears ended its boys basketball season with a record of 6-18. The team ended the season in the first round of District play last year. Newcomer, Dylan Curtis is now the head varsity coach making this his first year at Conway.

“Conway won six games last year and also lost all five starters,” said Curtis. “We are going to have a slew of new guys to the Varsity program. I do like what I see here, we have had a few practices so far. I like our guys a lot. We have six seniors on the roster so we will be old but they will be inexperienced. It will be a process to get where we want to be but I think the guys will buy in and work hard everyday having us play our best basketball by February.”

“I am excited for this season,” mentioned Long, “I think we will be better than we were last year. We have three starts back with a couple of other girls that have a little bit of experience as well. We are focusing really hard on our half court defense this year and simplifying our half court offense. I am excited about it and we have a lot of things lined up with what we want to do offensively this year and what we want to put in defensively with a couple of new ideas. We have a great group of girls here that are working really hard and are coachable.”

The Lady Bears will start the season at Lebanon’s Jamboree on Nov. 18.

Fordland boys basketball team ended its 2020-21 season with a 7-14 record. Returning most of the players this season, the team lost two to graduation with one player making the choice not to play this season.

“We have a chance to be a better team than we were last season,” Coach Brett Rippee stated. “We don’t have a ton of big men, we are pretty guard heavy but we are really fast and athletic.”

The team has four seniors this year that will contribute to the team.

“Last year I think we struggled with all of the challenges the other teams faced,” said Rippee. “With Covid and quarantine we didn’t respond very well to some of those setbacks so I am kind of hoping that we won’t have to worry about that as much.”

Coach Rippee stated that the team has a tough schedule this year and is “cautiously optimistic” for the 2021-22 season.

Coming off of a 3-16 record last season the Fordland Lady Eagles are hoping to improve their season this year. The team does not have any seniors this year but the team has five varsity players that will be returning this year with some more experience.

“I think we turned a corner this summer,” Coach Kevin McDaris said. “If we can learn how to handle the ball while keeping up the good defense I think we will get better as the year progresses. We are working on two years with this team. I have set the goals of seeing us score a little better than we did last year as well as seeing our defense progress, just overall being more efficient on the court.”

The team will host the first season game on Nov. 23 against Galena.

Coming off of a 20-6 record last season, the Rogersville boys basketball team will be returning 7 players this year, six of the seven will be returning to the court while one is out with Tommy John surgery. The team also has five newcomers that may be essential to its team this season.

us over some humps,” Coach John Schafer wrote. “We are going to have to put in the work like we always do and our guys are excited for the challenge. Some of our younger guys will get an opportunity to make their name on LR basketball. This group is guard heavy with the ability to run the floor and apply full court defense. We will still take pride in being tough defensively and try to put ourselves in a position to win night in and out.”

The Wildcats season will begin at the Eagle Invitation on Nov. 29- Dec. 3.

With three returning seniors and one senior deciding to play this year the Lady Wildcats are ready to begin their season.

The Lady Wildcats ended the season in the second round of the Class 5 district tournament, finishing with a 8-15 record in the 2020-21 season. With three returning seniors and one senior deciding to play this year.

“I feel like the seniors are going to provide great leadership,” Coach Corey Watts stated. “We have a great opportunity to compete for the conference and district title which will be our goal for the season.”

The Lady Wildcats will open its season Nov.29-Dec. 3 at the 41st Annual Fair Grove Invitational Tournament.

An outlet for homeschooled atheltes

The stigma of young love